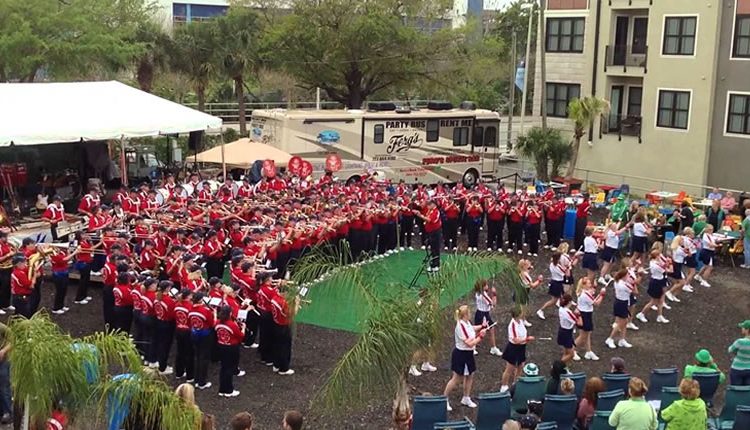 Ever find yourself reminiscing about the “good ol’ days” when you were in marching band?
In 1983, Bill Findeison felt the same way.

“There are thousands of kids who march in bands. I wondered what happens to them all,” he said.
Findeison (then the owner of a music store in St. Petersburg, Fl.) placed a newspaper ad for former high school or college marching band members interested in performing in a festival parade. About 75 people responded.

Now, 27 years later, the Second Time Arounders band has grown to include 500 marchers, majorettes, rifles, flag twirlers, and dancers. Members, ranging in age from 18 to 84, travel to St. Petersburg to perform with the band. Among them are doctors, teachers, lawyers, and pastors. The band practices five times a year, with about seven performances.

“This is living proof that music education lives forever,” Findeison said. “You might not remember the second period math class you took, but you’ll always remember band, the fun you had, and the trips you took.”

The Second Time Arounders were chosen as one of 10 bands to perform in the 2008 Macy’s Thanksgiving Day Parade – a performance that will be seen by more than 50-million television viewers across the country. The band will be the largest ever to perform in the parade.

Findeison said The Second Time Arounders have inspired 10-12 similar bands that across the country.

“The love of music and camaraderie lasts a lifetime,” Findeison said. “You can’t play football at 50, but you can pick up a trumpet and play. Music is something you can do your whole life as a participant, not just an admirer.”

For more information on the Second Time Arounders, visit: www.secondtimearounders.com.

An Interview with John Carnahan