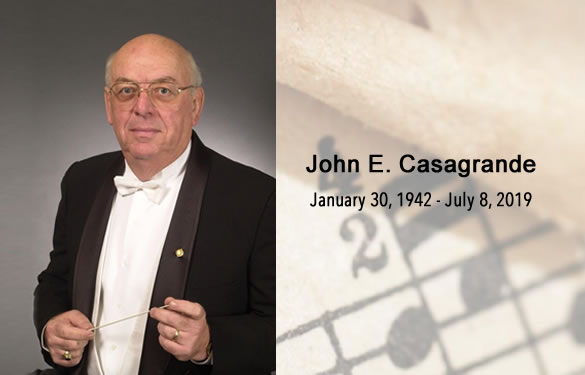 Thank you John for your friendship and passion for music education. We will miss you.

John was born in Pen Argyl, PA on January 30, 1942, son of the late John and Peterine (Dotta) Casagrande.  He was the loving husband of Jo Marie (Buckley) Casagrande. They celebrated their 55th wedding Anniversary in June.

John was Professor of Music Education at George Mason University, and was previously Director of Bands at W.T. Woodson High School in Fairfax County, Virginia, Mount Vernon (VA) High School, East Stroudsburg (PA) and in the Wissahickon (PA) schools.  He received both his Bachelor’s and Master’s degrees from Ithaca College, NY, where he was graduate assistant to the legendary Walter Beeler.  He was a 1959 graduate of Pen Argyl High School in Pen Argyl, PA.

In 1998, Mr. Casagrande was elected to membership in the prestigious American Bandmasters Association.  Other honors included election to the American School Band Directors Association, multiple “Citations of Excellence” from the National Band Association, the Sudler Flag of Honor, the “Mac Award” from First Chair of America, five awards for “Professional Excellence” from the Fairfax County School Board, W.T. Woodson High School “Teacher of the Year” and finalist for Fairfax County “Teacher of the Year”.   He was cited by US House of Representatives, the Virginia House of Delegates, the Fairfax County Board of Supervisors and the Fairfax County Board of Education for his professional accomplishments.

He maintained an active schedule as a guest conductor and adjudicator throughout the United States and Canada and served as a guest lecturer at numerous colleges and universities in the East and Midwest.  He was also published in the PMEA “Notes”, VMEA “Notes”, the National Band Association “NBA Journal” and the Washington Post.  He was a contributor to “The Music Director’s Cookbook – Recipes for A Successful Program”, published by Meredith Music Publications.

He was a member of Holy Trinity Catholic Church in Gainesville, VA.

In addition to his wife Jo, John is survived by a son, Scott Casagrande, husband of Janice of Arlington Heights, IL; a daughter, Tina DuBois, wife of John of Apex, NC; 4 grandchildren: Mary and Julia Casagrande, Molly and Jack DuBois, and many nieces and nephews. He is preceded in death by sister Dolores Brescancine and brother Raymond Casagrande.