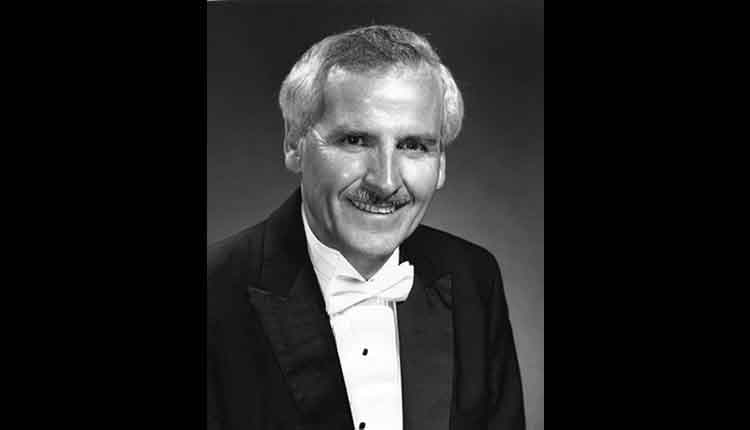 Ray Cramer will retire after 36 years of distinguished service to the Indiana University Department of Bands, with 24 years as director of bands. He will continue his presidency of the Midwest Clinic, an international band and orchestra convention with over 14,000 attendees representing 28 countries. Cramer will regularly guest conduct at the Musashino Academy of Music in Tokyo, Japan, for the next several years, and has many guest-conducting engagements already scheduled in the United States into 2008.

In a recent interview with banddirector.com, Ray Cramer discussed his first experiences with music as a grade school student in rural Illinois and his plans for the future, as well as sharing his expertise with band directors in the field.

BD: You started out playing trombone in grade school?
Ray Cramer I started playing trombone in grade school, and quit. Not a great beginning, but we had a new director, Don Zimmerman, move to town the following year. He was a graduate student from the University of Illinois. He had been going through old records and saw my name listed, but noticed I was not registered for the junior high band. He found my parents’ address, drove to our farmhouse in the country, and introduced himself and wanted to talk about my possible participation in band. Here’s a man who went the extra mile, well actually 8, as we lived a good distance out of town. That single visit from Mr. Zimmerman changed my life and I will be forever thankful for his diligence in “tracking me down.”

He also was a trombone player and actually played for me during that visit. He was a fantastic player, and I was most impressed by his tone, range and technique. The fact that he played some tunes I recognized sealed the deal, and I was hooked from that point on. I started taking lessons from him and I took to the trombone like a duck takes to water. I became interested in music mainly because of his influence, and I practiced like crazy so as not to disappoint him. We all have to realize how important our dedication and commitment to music means to young people at every grade level.

BD: How did you come to choose music education as a major?
Ray Cramer I received my undergraduate degree in music education, but during my junior and senior years, I really got turned on to composition. The director, Forrest Suycott, was relatively new, he had just graduated from the University of Iowa with a degree in composition and trumpet performance. He was also my brass teacher (he taught all the brass), and this was in addition to conducting the concert band, marching band, and brass choir. We played a lot of pieces that were contemporary for the time, which, in turn, inspired me to do some composing on my own.

When I headed off to graduate school, Frederick C. Ebbs was the band director. I really wanted to play in his band, and he really encouraged me. I had, however, received a fellowship in composition. So I was playing, as a graduate student, in the marching band as well as covering first trombone in the symphony orchestra, in the brass choir under William Gower, and playing in the faculty brass quintet.

By the first half of the first semester, I realized I couldn’t keep up with everything. Professor Gower said to me, “Ray, you have to make a decision. You can’t do all the playing that you’re doing, and write “X” number of measures each week for your composition teacher.” I told him that I wanted to teach. He replied, “That’s where you’re going to make your living and career, so give up composition.” Since I already had a degree in music education, I decided to pursue a performance degree, giving a full recital in each semester.

BD: Didn’t you teach high school band before coming to Indiana University?
Ray Cramer I first taught high school, junior high, and elementary school band in Bardolph, Illinois, which is 9 miles east of Western Illinois University. They consistently hired a senior music education major from the university to run the instrumental music program. One friend would pass it on to the next friend. This was a valuable experience, my original band had only 16 students.

After graduate school, I taught in West Liberty, Iowa, at a rural country school where the students were enthusiastic and ready to advance in size and quality. Then I moved to Harlan, Iowa, which was a slightly larger community. Later, I moved to a very large school in Parma, a suburb of Cleveland. That program was without question one of the finest in the United States, as they had performed at both the Midwest and Mideast Clinics in previous years. Every student studied privately with Baldwin Wallace Conservatory and Cleveland Institute of Music faculty, Cleveland Symphony members, and other top professionals in the area.

A year later, the assistant band director job opened up at Indiana, and I had always wanted to teach at the collegiate level. My mentor, Fred Ebbs, called me to see if I would be interested in applying to be his assistant at Indiana. I took the job in the summer of 1969.

BD: What are your plans for retirement?
Ray Cramer I’m not really retiring, just changing jobs. I love being here. It doesn’t seem like 36 years because I’ve been able to do so many different things, leading the marching band, pep band, symphony band, the wind ensemble and I even conducted one of the university orchestras for seven years in addition to teaching graduate conducting and wind literature courses. Thirty-six years is a long tenure, and I have enjoyed every experience. The time has literally flown by.

I’ve known for several years now that when I did retire, I’d spend more time with the group in Japan (Musashino Academy of Music). For the next four years, I will be there at least three months each year, conducting the top wind ensemble. We have so many good friends there it is like a second home for us. My wife, Molly, and I very much enjoy the culture and the friendliness of the Japanese people.

I will also continue the presidency of the Midwest Clinic and guest conducting in this country. I love working with young students, this is a way for me to continue having an impact on students who might decide to go into music, as well as influencing young teachers. The most difficult part of retiring is not to have that daily contact with great students.

BD: Are professional bands more popular in Japan?
Ray Cramer The band activity is pretty intense, and we draw such wonderful audiences. We regularly have sell-out crowds in large concert halls, and the many young students who attend these concerts impress me. I see very few young students attend concerts at the university. I used to take busloads of kids to the University of Iowa concerts when I taught in Iowa.

I feel that we have to work hard to build the audiences back to the level they were in the 1950s and 1960s. The audiences were much larger then than they are now, and programming is partly to blame. We have to get people back to our concerts, and this means being careful in giving the audience a well-balanced program. They obviously need to hear new music, but we should also include standard works from our repertoire like Holst, Grainger, Persichetti, Creston, Copland, and even some of our great march composers. People still identify with that kind of music.

BD: Current directors at all levels seem to be experiencing problems with budget cuts and lack of administrative support. What advice do you have for today’s directors on avoiding burnout?
Ray Cramer We are all facing budget cuts and program cutbacks, and this forces directors into doing more with less. But our profession is not in jeopardy. The school programs may not be as large or they may have a different focus. But adapting to change is in the nature of what we have done as directors for years. There will always be problems, but I think music education, as a profession, will continue to be important for years to come.

I have great concern about director burnout; 4.2 years is the average length of tenure for today’s directors. That’s a travesty. We’re turning over too many people too quickly. It’s true that schedules and budget problems contribute to this, but mostly, burnout comes from stress-related aspects of the job. Expectations are to high and to demanding, which in turn affects health and family life.

Directors have to be careful. I refer to this problem as building a cage around you. Each time you have a great success, you’re putting another bar in your cage. You raise everyone’s expectations. But you can’t do it all! In time, you have so many bars around the cage that you feel totally trapped with what feels like no escape. Directors have to prioritize between work and their responsibility to family. Schools must understand that this is a serious problem, and if they are not willing to help, then you must change jobs. Any director can only stretch himself or herself so far before everything starts to come apart.

Low pay is another factor that leads young directors to premature burnout. They see their friends, who graduated in other disciplines, earning much more money, and the pull of financial demands creates tremendous stress in a young family’s life, so much so, they see no way out other than leaving the profession.

Through the Midwest Clinic, we’re trying to provide more information for young directors that will hopefully help them deal with these kinds of issues. In the past couple of years, we have offered workshops dealing with this very subject: avoiding burnout, dealing with parental issues and administrative pressure, and general guidance through mentoring.

An Interview with Amy Nathan