My Transition from Performer to Conductor by ENS Bruce A. McDonald

by ENS Bruce A. McDonald, USN 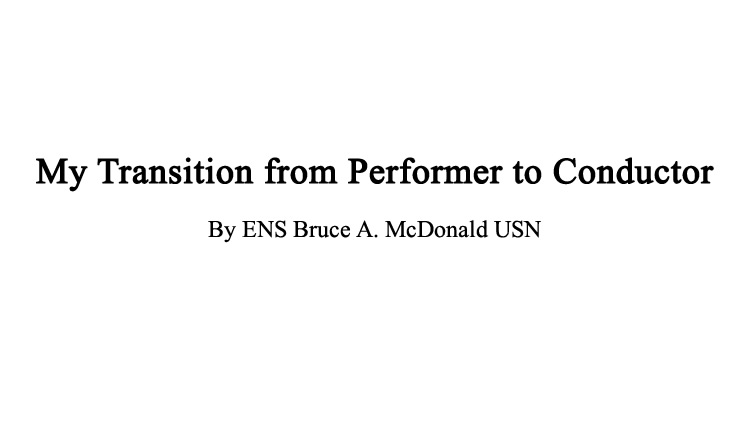 My earliest recollections of wanting to conduct go back to my teenage years. Listening to the radio or to records, I found the idea of compelling musicians to “play it my way” rather exciting and would follow along with a pencil as my baton. However, I had absolutely no idea what was involved in conducting: score preparation, knowledge of instrument ranges and transpositions, rehearsal techniques, diplomacy, nerves of steel, etc. So I headed down the road to becoming a performer, playing mostly in orchestras or in concert bands. As a trombonist, especially in an orchestra, I had an awful lot of time to watch the conductor and to determine what worked and what didn’t work from the musicians’ standpoint. The knowledge of what doesn’t work is, for me, perhaps the single most important bit of conducting technique I learned from sitting on the “inside”.

Performers are inherently critical. Without constant appraisal of how they are performing, none would ever develop the skills required to be a successful musician. Likewise, they are, and should be, critical of the person leading them through a performance. They may not know what is involved with preparing and conducting a concert, but they certainly know when the conductor is prepared, dedicated and certain of what he or she wants. Again, time spent as a performer plays a critical role in one’s awareness of overall leadership style and its effect, good or bad, on performance quality.

None of this “situational awareness” is worth anything without solid musical skills and a strong will to conduct. We all have come across conductors with fancy baton technique but with little musical concept, as well as fabulous musicians who reluctantly step onto the podium and are consumed by indecision and fear. Success on the podium is a balance between all of these skills, and the best way to meld them is to jump into the fire and give it a try. Fortunately, my Navy career has afforded me opportunities to conduct more frequently than if I were a civilian musician. Also, the high quality of musicianship and the wide variety of performance settings serve to accelerate my education. When conducting the Navy Band, for instance, if something is not working in a rehearsal it is a fair assumption that I am doing something wrong!

As I’ve stated, the skills any fine instrumentalist needs to perform well are the same skills needed by a conductor. However, there are a few critical differences in approach that I feel we must be aware of in order to succeed. First, the instrumentalist is required to be aware of his or her own musical contribution, whereas the conductor must take the “big picture” view. This ability to control the soundscape created by a large ensemble takes considerable time and patience. As players, we are hyperaware of what is happening right around us, but we seldom know what the blend is like out in front where the audience sits. The conductor must literally let go of the fine details and put his effort into blending and balancing opposing forces to create the intended product. One cannot create what cannot be conceived, so a conductor must put substantial time into score study to build an aural picture in his mind, line by line. Another difference is that a successful instrumentalist must submit to the will of the conductor if there is to be any sense of ensemble. The conductor, conversely, IS that will. However, will alone is not enough. The likelihood of profiting from willpower depends upon the conductor’s ability to apply a constantly changing mix of humor, anger, disappointment, pleasure, and compliments–the whole range of human emotion used in the correct amount at the right time to inspire the ensemble. No successful conductor is a “one trick pony,” achieving success by always being nice or always being caustic. I believe that the combination of skills as a psychologist, musician and leader will serve as a barometer of your success as a conductor.

I have thoroughly enjoyed my transition from player to conductor. I am often asked if I miss playing, but I must say that I am still playing–it is just that my instrument is bigger and more unwieldy! The satisfaction of directing a high-quality ensemble in performance is like no other I have felt in my musical career. I would encourage other performers to give it a try. I do not know how many times I have seen unsuspecting instrumentalists discover they have a knack for conducting and go on to direct more than they play. The experience and dedication that got them the job as performers will undoubtedly serve them well as conductors.