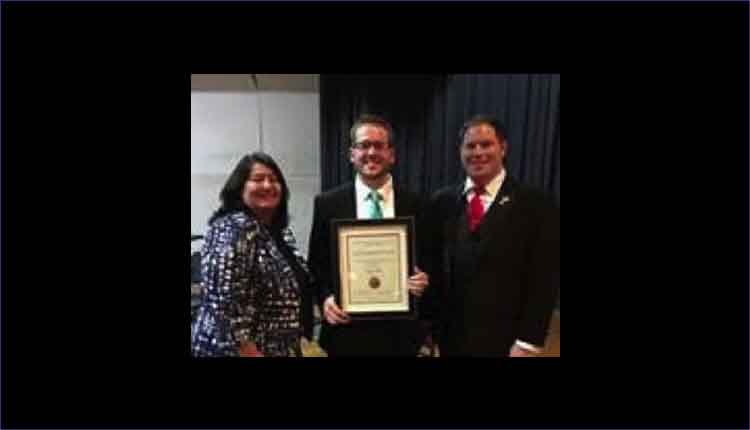 Congratulations to Ryan Hurd, Band Director of Jackson Middle School, in Ohio, who received the 2017 American School Band Directors Association (ASBDA) Outstanding Potential Award for Young Directors. The award is sponsored by the ASBDA Foundation as part of ASBDA’s “Each One Reach One Project”. ASBDA member Aaron Rex, director at Jackson High School, nominated Ryan and presented the award on May 12, 2017 during the middle school’s Spring Band Concert. Also presenting was Kathy McGrady, ASBDA member and president-elect of the Ohio Music Educators Association.

In nominating Ryan, Aaron Rex said, “Ryan makes exceptional efforts to connect with students and establish outstanding rapport. He develops a nurturing culture that drives students to push each other to succeed. Professionally, Ryan is always looking to grow and serve”.

Rex continued, “Ryan is committed to developing young performers. Ryan’s middle school bands are the finest in the OMEA District 17. His middle school students have received nearly one hundred “Superior” ratings at OMEA Solo & Ensemble. His high school group, the second of three concert bands at Jackson, received a “Superior” rating at the OMEA Large Group Adjudicated Event. This is an accomplishment that has never been achieved by the JHS second band in its history.”

The ASBDA Foundation Outstanding Potential Award was designed to honor outstanding bandmasters who have distinguished themselves early in their careers and who demonstrate the professional standards and artistic qualities upheld by the American School Band Directors Association. Candidates are nominated by a current ABSDA member and must be within the first five years of teaching or a current student teacher, and should exhibit the qualities of a future outstanding director.

The purpose of the American School Band Directors Association is to influence the direction and furthering the cause of good music in the nation’s public schools. As an organization it stands for