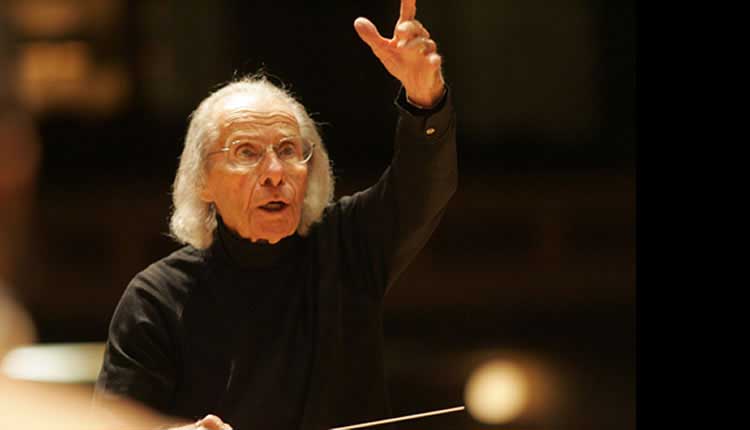 Frederick Fennell, the legendary founder of the Eastman Wind Ensemble, conductor emeritus of the Tokyo Kosei Wind Orchestra, and professor emeritus at the University of Rochester’s Eastman School of Music, died December 7, 2004, at his home in Florida after a brief illness. He was 90 years old.

His founding of the Eastman Wind Ensemble in 1952 sparked a change in the perception of bands and elevated the status of college, university, and professional ensembles. With the support of composer and then director of the Eastman School of Music, Howard Hanson, Fennell brought this ensemble to the forefront of wind band music and completed several landmark recordings. Starting with American Concert Band Masterpieces (1953), Fennell and the Ensemble recorded 22 albums for Mercury Records, many of them still available on CDs. In 1977, Stereo Review selected the Fennell/EWE recording of Percy Grainger’s Lincolnshire Posy as one of the “Fifty Best Recordings of the Centenary of the Phonograph.”

The idea was, Fennell often stated, was that each student would be “the soloist that his private teacher had taught him to be” because parts would not be excessively doubled.

“The innovation that is the Eastman Wind Ensemble was in no way radical,” Fennell once wrote. “It simply merged from the music that led me to it.” Their repertoire included Sousa marches, works by European masters Gabrieli, Mozart, Schoenberg, and Stravinsky and many works by Americans: Barber, Thomson, Hanson, Schuman, and many others.

After he left Eastman in 1962, Fennell was associate music director of the Minneapolis Symphony then conductor-in-residence at the University of Miami and principal guest conductor of the Interlochen Arts Academy and Dallas Wind Symphony. He was appointed conductor of the Kosei Wind Orchestra in 1984.

President William Jefferson Clinton writes in the recent release of Fennell: A Tribute to Frederick Fennell by Robert Simon (published by GIA Publications, Inc.), “For over seven decades, Frederick Fennell has been America’s Ambassador of music around the world. I have loved his editions and recordings since I first played them in high school. It was an honor to have him conduct the Marine Band as President.”

During his lifetime, Fennell was inducted into the National Hall of Fame for Distinguished Band Directors, as honorary chief of the Kiowa Tribe and to the Classical Music Hall of Fame. In 1992, Frederick Fennell Hall was opened in Kofu, Japan.

Fennell is survived by his wife, Elizabeth Ludwig-Fennell, and his daughter, Catherine Fennell Martensen. Funeral and memorial arrangements are not known at this time.