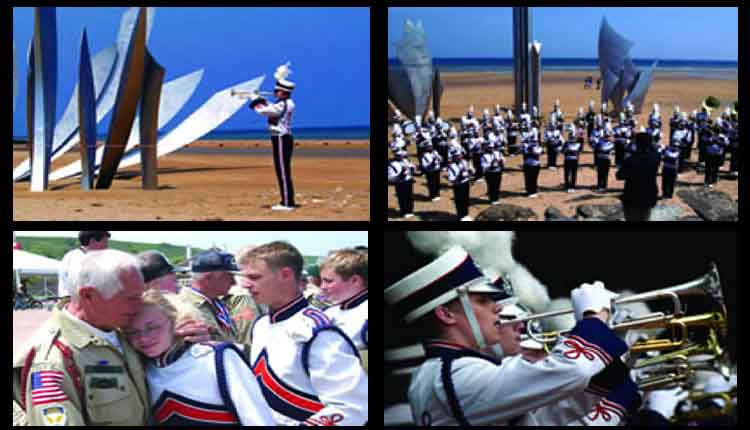 The year 2004 marked the 60th anniversary of the Allied Invasion of Normandy. For years, I have dreamt of bringing young American musicians to Normandy to participate in this once in a lifetime event. Thanks to a remarkable group of students, this dream was realized, surpassing all our expectations.

At London’s Heathrow Airport, I greeted a group of 96 students, teachers and community members from Provo, Utah representing the Timpview Marching Band. They had prepared for this tour for over a year. In addition to rehearsals, they took history classes, watched films, and attended meetings with war veterans. By the time they landed in London for their 10-day tour of England and France, they had a thorough historical understanding of the Invasion and its significance. Now it was time to bring history to life.

In London, we visited the Cabinet War Rooms, HMS Belfast and Imperial War Museum. On a sunny afternoon, the band performed at London’s Victoria Embankment Stage for an audience that included veterans from various countries.

We traveled next to Portsmouth and spent an evening at a British Legion Club. After performing for British veterans, band members talked with them over dinner. As we said farewells, a teary woman told us, “My father came home from the war 60 years ago and has never spoken of his experiences. Tonight he opened up to these young people and talked for the first time about what happened to him during the war. This means so much to my family, and we cannot thank you enough.”

The emotion of the tour continued to build as we boarded a ferry to cross the same channel as troops had crossed to France 60 years ago.

The Anniversary of D-Day arrived! We left our hotel bright and early with credentials that allowed us to visit all three official ceremonies. President Bush and President Chirac spoke at the American Cemetery above Omaha Beach. Several of our students had the thrill to shake hands with the two presidents. From here we raced to Pointe du Hoc for the next ceremony, after which a two-star U.S. Army General invited us to perform. The final ceremony began at 5:00 p.m. at Utah Beach. We arrived back at our hotel at 11:00pm. This was certainly our longest day but one that we will never forget.

After touring the D-Day museum at Arromanches, we returned to Utah Beach. As they stood on the sand and performed patriotic tribute, it seemed the height of the tour. They marched to the Utah Memorial where several hundred American soldiers listened to our concert. After we laid a wreath at the monument, the soldiers ceremonially escorted us to our coaches. We thought it couldn’t be more perfect until they proceeded to say thank you, by forming two military lines and salute the students as we drove away.

On our last day in Normandy, we returned to Omaha Beach for an unforgettable lesson. A history teacher told the story of a battalion (platoon?) of 600 soldiers that landed the morning of June 6, 1944. We learned that within 45 minutes of landing on the beach, over 450 men were killed. Of the 150 men left alive, only eight were able to fight.

As we stood at the water’s edge, our imaginations reeling, we were approached by several veterans. Each was over 80 years old, had parachuted into Normandy on D-Day in 1944 and reenacted the event the day before. One of them looked at his comrade and said “I’ll do the 70th anniversary with you, but I don’t know about any after that.”

At the end of the day, we marched single file through the cemetery to lay a wreath on the grave of SSgt. Carl Yarrington, a soldier from the state of Utah who died on June 6, 1944. This was a fitting end to our visit to Normandy, paying tribute to a soldier who made the ultimate sacrifice. The students had given their time and talents to commemorate a day which should never be forgotten, and created unforgettable memories for themselves along the way.

Notes from Timpview Marching Band Director, Dr. Dave Fullmer…
The tour was additional evidence to the power of music and I am pleased to share our Normandy experience with anyone interested in listening. As we prepared the national anthems, the armed forces medley, and other pieces, I reminded the students that this music was very meaningful to the veterans. Their musical preparation would, in part, constitute the quality of their gift to the veterans. The veterans were very moved by the music and seemed to understand the sincerity of the students’ gratitude. I think one of the main things that set this experience apart from a typical “tour” was the intense preparation that preceded the trip. Students knew up front that money would not be enough to qualify for membership in this band. Memorization of the entire program and intense historical study (including research projects, readings, lecture series, and veteran talks), and memorization of some French phrases were required before they could get on the plane. This preparation created a tremendous sense of unity, understanding and gratitude. These important traits can be taught.

Logistically, it may be of interest to some directors that the Timpview Normandy Band was designed to be a Marching/Concert Band hybrid. Wearing uniforms and marching into some venues worked well with the military nature of the project. Our performances included many concert band arrangements including Hymn for the Fallen by John Williams and An American Elegy by Ticheli. Memorizing the entire program and playing while standing in arcs allowed us to perform in venues that would not have been accessible with chairs and stands (ie. beaches, Point du Hoc, Saint Marie du Mont, et al). Some of our most memorable performances were not planned out beforehand.