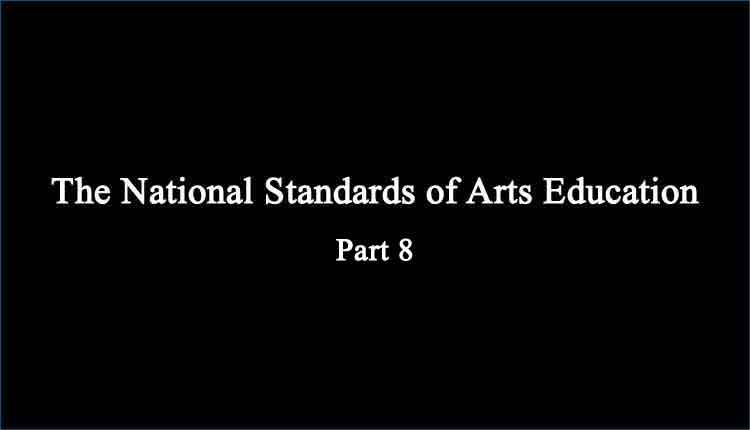 Standard Eight, understanding relationships between music, the other arts, and disciplines outside the arts, uses a broader and more general approach to learning the elements of music. Although little research has been done on the benefits of teaching music in conjunction with another subject, many educators believe it is important to highlight these relationships for students in hopes that it will enable them to comprehend music more fully than they would otherwise. While experts agree that people learn in different ways- some learn best from an analytical standpoint, for example, while others thrive in a hands-on environment- this multi-disciplinary approach has yet to become a widespread practice in middle and high school music classes. Directors most often cite a lack of time as the reason why more of these types of activities are not included in the course curriculum, but there are some simple ways to incorporate the elements of this Standard into other lessons that will give students the chance to at least dabble in this concept.

Opera and ballet are both excellent (if not obvious) places to start when it comes to understanding relationships between music and the other arts because these complex art forms incorporate elements of dance, theater, and even visual art into a single production. Students would enjoy taking a break from rehearsals and watching a video for a day or two; this activity works well when it is pitched as a reward for playing well on a concert, or during the last couple of classes before break. Directors could make this lesson even more relevant by programming a selection from The Nutcracker or a Mozart opera overture on a concert then viewing the work from which it originated. Some of the many lesson possibilities include (but are not limited to) providing specific examples of how the music furthers the dialogue, how the costumes and scenery enhance the believability of the actors, or how all of these elements are combined with the movements of the dancers to tell the story without using any words.

Artists use a separate and distinct set of stimuli in each discipline– sound in music, color and texture in the visual arts, movement in dance, and dialogue and human emotion in theater– and although the basic components differ, the characteristics of each can transform everyday events, emotions, and ideas into works of art. However, many of the elements and processes used in the various arts, such as imagination, unity, repetition, and contrast, are the same. Students should be able to identify these common principles in each of the arts, and explain the similar and distinctive ways they are used in the various arts, citing specific examples. Perhaps the easiest way for students to compare these artistic characteristics is to choose a particular time in history, a certain event, or a single culture as the basis for their comparisons. They could examine the clarity and symmetry used in European music and architecture during the Classical period, for example, or the importance of dance and drumming in African cultures.

The connection between music and historical events is so strong in every culture, however, that the final Standard in this series is devoted entirely to this course of study. But because the same could be said about the other arts as well, it is still important to include some historical and cultural lessons in these multi-disciplinary comparisons. Wars, political uprisings, sudden economic shifts and other large-scale social changes generate such a significant and influential amount of music, art, literature, and even theater in almost every culture, and the similarities among these are too important to be overlooked or ignored.

Almost every school subject has some ties to music; students could describe the similarities between music and poetry, noting how poets use words and composers use notes to convey images and feelings and how the different meters used in poetry compare to rhythms and meters in music, or consider the difficulties of setting texts to music. Directors could use the principles of mathematics to explain Serialism and twelve-tone compositions and the Pythagorean Theory of the ratios of different intervals (or, for younger students, use fractions to break down rhythms within a measure of music, using different time signatures) or elementary physics to describe the way in which sound is produced on wind and percussion instruments as well as with the human voice.

Finally, explain the importance of and similarities between the creators, performers, and interpreters of the various arts. Students will undoubtedly know a great deal about the performers- the vocalists, instrumentalists, actors, and dancers who present these works of art to the public- but they may not have given much thought to the many other people involved in the production and presentation of the arts. The composers, choreographers, painters, and playwrights are the creators, the masterminds behind some of the greatest symphonies, dramatic monologues, and paintings of all time, but the directors, conductors, and even set builders act as a vessel for their art. All the artistic potential and creativity of these works are channeled through them, and their influence and personal interpretation transform every performance, and it is because of the interpreters that even centuries-old plays and concertos seem fresh and new to modern-day audiences.

This Standard, if it is well-presented, can be invaluable in turning band students into life-long music lovers. If a student who does not believe they are very creative or spontaneous can apply the same analytical approach they use in the math and science classes they are so fond of to music, or if a student who will never be much of a performer can express their creativity by doing behind-the-scenes work for a stage production instead, they will be able to retain their interest in music long after their time in the band has ended.