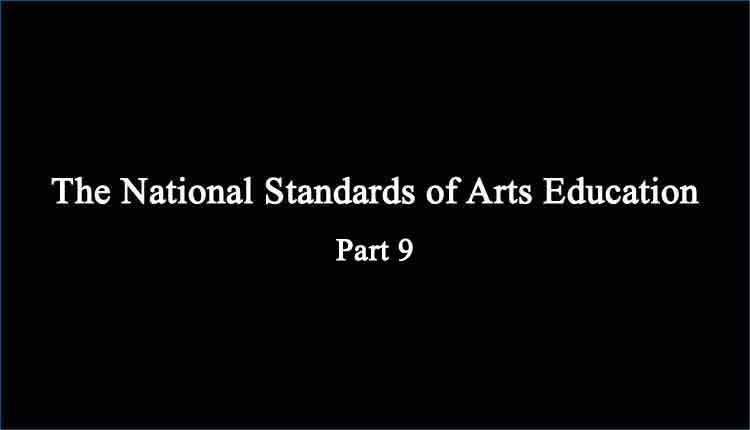 The Ninth and final Standard, understanding music in relation to history and culture, is crucial to a well-rounded musical education. This pseudo-introduction to musicology teaches students how to classify music by style, culture, and genre based on a set of distinguishing characteristics and also to identify the historical events or conditions that are so often the source of new styles and genres of music. The lessons and musical examples used in presenting this Standard need not (and should not) be limited to classical or even instrumental pieces, although this would be easy to do, as entire advanced degree programs have been devoted to the study of single pieces or events that have occurred over the history of music. The primary purpose of including this topic as part of the standard course of study in middle and high school music classes is to expose students to several different types of music in a limited amount of time.

Students should be able to describe the distinguishing characteristics of genres and styles from a number of cultures and use these characteristics to classify standard or familiar musical works into the appropriate category. For example, the figured bass lines and often elaborate ornamentations used in Baroque music, the complex, chromatic, and emotionally charged harmonies found in Romantic orchestral works, and even the pentatonic scales and modes that are prevalent in folk songs from cultures throughout the world should instantly trigger a sense of recognition in students, once they know what to listen for. This lesson can be taken a step further by asking students to identify the composer and historical period (and perhaps even the title) of the piece in question in addition to the genre or culture.

Once students become comfortable identifying songs from different cultures or musical works by well-known composers, challenge them to try their hand at classifying unfamiliar works (although these should still be representative of, not exceptions to, the style) and ask them to defend the choices they make. They should be able to explain the distinctive elements that make these pieces characteristic of the style they chose and offer an educated guess as to whether the compositions are high-quality representations of the genre. This is an important skill to develop because the stylistic features found within a piece of music often help to define the artistic customs used during the period in which it was written, or unquestionably link it to a historical event or a specific culture.

Music serves a similar function in many cultures around the world, but sometimes its purpose is culture-specific. American students are quite familiar with music as a form of scholarship and entertainment, but may not know as much about the religious or ritualistic importance it holds in some societies or even the political underpinnings that were hidden in some compositions during certain points in history. Students may be fascinated to learn about the ritualistic chants used by indigenous tribes around the globe, or shocked to discover that the slaves who worked on plantations in the American South sang upbeat and rhythmic songs to help them work faster and prevent anyone from falling behind and not because they enjoyed what they were doing.

World events that were current during a composer’s lifetime also play a large role in determining the content of their music. The symphonies of Shostakovich capture the sentiments of despair and hopelessness shared by most Russians of the time- who felt trapped by a controlling and oppressive communist regime- better than any history book or documentary ever has, and the anti-Semitic views of composers such as Wagner and Liszt still spark heated debates among scholars and religious leaders to this day. The roles of the musicians themselves can also vary widely; musicians entertain, teach, and pass along cultural traditions, but some perform for money, some for fame, and some for personal enjoyment. Encourage students to make a list of musicians from around the world, from opera singers to drummers in a rock band, to even street performers. Try to find individuals who represent each role (say, the Three Tenors, Leonard Bernstein, and an Andean flautist), and cite the accomplishments of each.

High school students are expected to name and identify sources of various genres of American music, and be able to trace their evolution and cite well-known musicians associated with each genre. A closer look at Broadway musicals, for example, will uncover a plethora of catchy and endearing tunes by the great duos of Rodgers and Hammerstein, Lerner and Lowe, and others, and tracing the roots of jazz or rhythm and blues will lead students to the culturally vibrant cities from which these styles originated, New Orleans and Kansas City. From there, it should be easy to name some famous musicians associated with each style of music, and perhaps delve a little deeper into their biographies, recordings, or other accomplishments.

American music is also a great place to find musical styles that show the influence of two or more cultural traditions; although jazz is the most obvious, there are many others to choose from. Once students identify the cultural source of each influence, they should have little trouble understanding how the events and historical conditions of the time led to the musical fusion of these cultures. As we all know, understanding leads to tolerance, and an education that includes lessons in tolerance is a well-rounded education indeed.