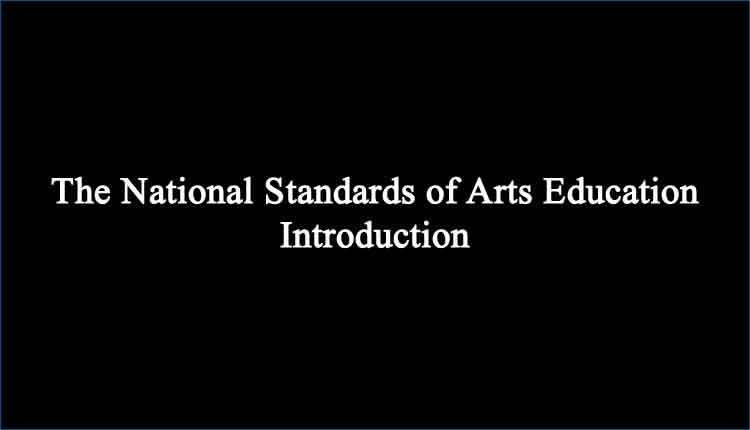 Every student at every level, Pre-K through 12, should have access to a balanced, comprehensive, and sequential program of instruction in music and the other arts, in school, taught by qualified teachers.? The Music Educators National Conference (MENC) first published standards to this effect, which reflect the collective expectations of experienced music educators on what American students should know and be able to do in the arts, in a 1974 publication called The School Music Program: Description and Standards. These were later replaced by voluntary national content and achievement standards in the arts (which, by definition, includes dance, music, theater, and visual arts), which were developed by the Consortium of National Arts Education Associations in January 1994. The Department of Education, the National Endowment for the Arts, and the National Endowment for the Humanities supported the development of these standards, and the National Committee for Standards in the Arts later approved them. The National Standards for Arts Education includes standards for all the arts, while The School Music Program: A New Vision excerpts and outlines only the music standards.

The MENC national standards are based on the national content and achievement standards in music. While compliance with these standards is entirely voluntary, schools across the nation have either adopted these guidelines and expectations as their own or structured their programs after the nation’s standard and still others work toward meeting these standards by bolstering their curriculum and improving education in the various arts.

Although these revised standards have been in place for more than a decade, some questions and criticisms still remain. Some educators feel the expectations outlined in the national standards are unrealistic, while others consider the descriptions too specific in some areas yet too vague in others. However, the sentiment that is most often voiced by those who want to incorporate the national standards into the lessons outlined in their course syllabi, is that they simply don?t know where or how to begin. Many teachers are unsure whether their current lesson plans meet the nation?s expectations, or wonder how to effectively include, for example, elements such as singing and composing in a band rehearsal.

The combination of exacting statistics and sometimes ambiguous wording used to define the standards are deliberate. The requirements for each standard must be mapped out as clearly as possible, but because support for the arts varies widely from state to state (and even from one district to the next) there has to be room for interpretation. This gives local educators and administrators the power to determine whether the standard has been effectively met on a case-by-case basis after factoring in all the variables, such as the strength of the program and the resources available.

Fortunately, the only unrealistic expectation that has arisen out of the implementation of these standards was created by those who expected to meet or exceed every standard right from the start. The national standards? sometimes referred to as opportunity-to-learn standards? were designed by highly qualified music educators and administrators who are still actively working in the field, and who know all too well what it’s like to try and give students the best education possible while facing limited resources and budget restraints. The standards set the bar for arts education in America, a way for schools and educators to measure the success of their program. That way, teachers will know where their programs have excelled, and can clearly identify any elements of an ideal education in the arts that their classes might be lacking. Unmet standards should not be considered as educational failures, but rather, goals or improvements to work toward in the future.

Inexperienced and first-year teachers are not the only ones who have questions about adopting or adapting the national standards in their classrooms. Even veteran directors find they could strengthen their programs in some areas. In fact, the editor of a renowned trade magazine for music educators reported that the overwhelming majority of letters to the editor were from teachers who were clamoring for articles on the practical application of the national standards. In the coming months, each standard will be examined separately, with in-depth definitions of the requirements and ideas on how to present these to a class full of middle- or high-school students. Each article will link to an online forum where directors who have successfully met that particular standard can share their expertise, and teachers who want lesson ideas or greater clarification on the subject can request this information from their colleagues. Ideally, the national standards will someday appear, in some form, in every music classroom in the United States, because generations of educators across the nation agree that these are the components necessary for a balanced and complete musical education.

Portions of this article were derived from National Standards for Arts Education. Copyright 1994 by Music Educators National Conference (MENC). Used by permission. The complete National Arts Standards and additional materials relating to the Standards are available from MENC – The National Association for Music Education, 1806 Robert Fulton Drive, Reston, VA 20191.

The Importance of Clarinet Embouchure