The Importance of Clarinet Embouchure 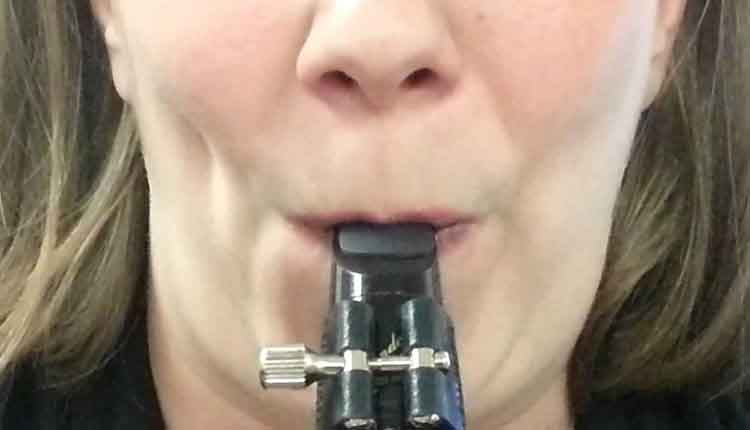 Correct embouchure is the most important aspect of playing which beginning clarinet students must achieve during their first year. As any band director knows, there are several other skills needed that first year – – but none so crucial as embouchure. Correct embouchure formation must happen to produce the characteristic, dark, ringing clarinet tone that we all want in our clarinet sections. Intonation is also improved with the correct embouchure formation. Unless the embouchure is formed correctly there will be too much jaw pressure causing intonation problems in the upper register. Failure to correctly form the clarinet embouchure leads to many problems in playing the clarinet efficiently and satisfactorily. With a few simple instructions during the first few weeks of playing (as illustrated in the Clarinet Embouchure and Hand Position lesson), the beginning clarinet student will have much more success. More advanced players will benefit from the lesson by improving their playing skills as well.

Click Here to purchase a copy of the Clarinet Embouchure and Hand Position Guide: by Robert F. Wall

Clarinetist & Conductor Robert F. Wall is a native Texan. His early music training was received in the public schools of Beaumont, Texas where he was inspired by the legend of Harry James, another Beaumont native, to learn to play beautiful music. Mr. Wall received his Bachelor of Science in Music Performance from Lamar University in Beaumont, then attended the University of Idaho in Moscow, Idaho and was awarded his Masters of Music in Performance. After serving three years in the military assigned to the Fourth U.S. Army Band, he did Post Graduate work in Music at the University of Houston. Mr. Wall has held the post of Principal Clarinetist with the Clear Lake Symphony for 17 years and, in 1993, was also named Associate Conductor. In addition to his work with the Clear Lake Symphony, he served as soloist and Principal Clarinetist for nine years with the Galveston Symphony under the direction of long time Houston Symphony Principal Clarinetist Richard Pickar.

Mr. Wall worked with the College of the Mainland production of the Faure Requiem. He also was Orchestra Conductor for the Galveston Civic Opera production of the Mikado. Mr. Wall, retired from public school teaching in 1997, was a music educator for 26 years. He continues his work in public schools as a Music Consultant where he teaches private clarinet lessons and Clarinet Master Classes at Deer Park High School and Friendswood High School. For the last 14 years, he has held the position of Instrumental Music Director and Orchestra Conductor at the University Baptist Church in Clear Lake. There, music orchestrating for the Church orchestra and ensembles is a large part of his job. With over 200 orchestrations to his credit, Mr. Wall is under contract to Cimarron Music and Productions where several of his original compositions and arrangements are published.