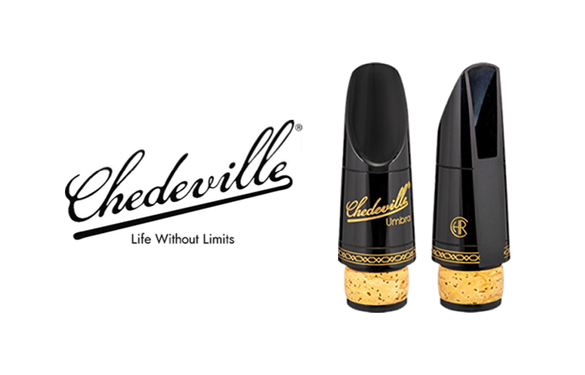 Savannah, GA….. Following last year’s revival of the famous Chedeville mouthpiece company under the new ownership of JodyJazz Inc., the company has announced the launch of a completely new range of classical clarinet mouthpieces called the Chedeville Umbra Series. Chedeville specialize in the design and manufacture of woodwind mouthpieces and accessories for classical music. The new Chedeville Umbra Clarinet Series was designed and developed in collaboration with acclaimed International soloist and co-founder of RZ Clarinets, Milan Rericha.

“The Chedeville Umbra Clarinet mouthpiece creates a beautiful dark sound full of rich colors,” said Jody Espina, President of JodyJazz/Chedeville. “The Umbra is darker in sound color than our Elite model and also has less resistance, a combination that is seldom found in a clarinet mouthpiece. Because the mouthpiece doesn’t add resistance, you will have no limits in dynamics, colors, or articulation.”

“Working with Milan Rericha reminds me of working with Kirk Whalum or Michael Brecker, artists at the pinnacle of their profession and who were also the most incredible humans that I’ve ever met,” Jody continued. “I’m extremely proud that Milan has chosen to play the Umbra and very proud of this new mouthpiece we’ve created together.”

The Chedeville company was originally founded in Paris in the early 1920’s and became particularly famous for their super-resonant premium rod rubber. The Chedeville mouthpieces made prior to World War II are considered to be the gold standard for sound quality and performance. For the creation of the new Chedeville Umbra clarinet mouthpieces no expense was spared, starting with the proprietary“Chedeville Rubber”, a more pure rod ebonite that recreates the great rod rubber of pre war legendary Chedeville mouthpieces.