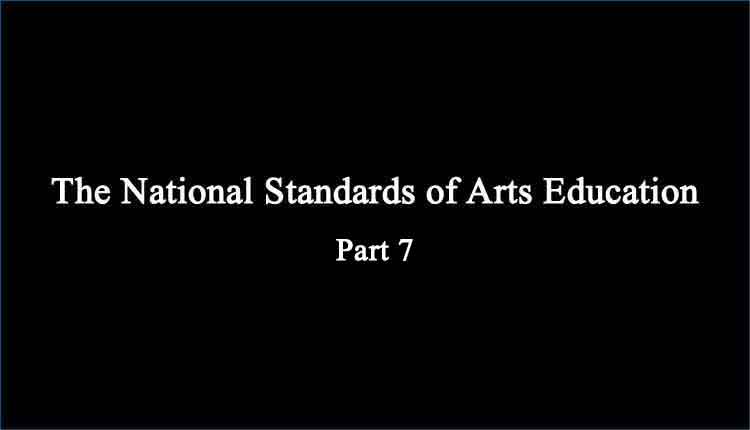 Part of being a musician involves developing a discerning ear and learning to explain and defend individual tastes in music, and constructively critiquing personal performances as well as performances of others. Standard Seven, evaluating music and music performances, aims to give students the necessary tools to do just that. Fortunately, the requirements for Standard Seven can be easily combined with other activities, and require little extra time to complete. In fact, this Standard ties in so well with listening, performing, improvising, and even composing that, with carefully structured lesson plans, there is no reason why any school should struggle meeting this component of a balanced musical education.

The first step in learning to effectively evaluate performances and compositions is to develop a set of criteria with which to determine the quality of music that students either listen to or perform. Students can easily come up with a detailed list that they can apply to any performance or piece of music as a class. Follow up a class discussion on the subject with a brainstorming session; write down any and every suggestion on the board, and help students narrow the list to the best and most useful ideas, ones which remain relevant even under broad and varied applications. This list may cover anything from whether a piece was performed accurately and with expression to whether the performer or composer managed to hold the listener’s interest. Once students are comfortable applying these criteria, the list can be expanded to include more specific guidelines to apply to different styles of music, but it is important to establish a solid foundation on which to evaluate and compare music and music performances.

I strongly recommend having students practice evaluating compositions and recorded performances before asking them to evaluate themselves or their peers. Perhaps the teacher could specifically ask students to critique a piece during a listening session and have them record what they did and did not like about the piece in their listening log. The same sort of thing could be done during a recording comparison; urge students to write a critical review of the differences between recordings and give specific reasons why they believe the recording they favor most is the best. If the course curriculum includes a concert attendance requirement, ask students to write a review of the concert in the form of a newspaper column, as if they were music critics. The most important lesson for students to glean from any of these activities is the ability to make educated observations and to defend the opinions that they form.

This same set of criteria may be applied to compositions as well. If directors are brave, they could ask students to rank the pieces they are practicing for an upcoming concert, basing their responses on the established criteria such as the use of melody, harmony, and dynamics and not on personal opinion such as a dislike for playing off beats or an aversion to medleys. In the same manner, students could choose their solo and ensemble pieces by evaluating a number of compositions, explaining why they chose the piece they did and also why they decided against the others.

Another great way to bolster critical and evaluative thinking and chart student progress is to record a brief performance by each student during the first and last week of the semester and have them compare recordings, essentially evaluating themselves. They should first note the areas in which they have improved, and other performance elements that they did well (i.e. followed dynamic markings, used vibrato, added rubato, etc.), according to the pre-established set of criteria. Using the same criteria, students should then determine what parts of their performance could have been better, and come up with specific ways to improve in these areas in the future. They could even grade themselves on their overall performance, effort, and class participation, and directors could choose whether to take that grade into consideration when figuring the actual grades at the end of the term.

Everyone needs to fully understand the concept of constructive criticism by the time they reach the self-evaluation assignment. Remind students that they are still learning how to play their instrument, that mistakes are a normal part of the process, and that it would be unrealistic to expect perfection. Stress the difference between constructive criticism and general criticism, which can come across as being quite harsh, by making examples of students who are too hard on themselves and suggesting different ways to point out the areas that need improvement in a manner that is less discouraging. Everyone knows that kids can be cruel; ask students how they would feel is someone else made the same critical remarks about their playing as they did about themselves. Behind nearly every sharp tongue and cocky attitude lies a fragile ego when it comes to junior high and high school students, and reminding them of how painful it is to be humiliated in front of their peers usually provides enough incentive for students to keep the catty comments to themselves.

In order for students to effectively learn how evaluate the performances, compositions, arrangements, and improvisations of others, they need to feel that they are in an entirely safe environment. Directors must be ready to help students elaborate on any critique that could be misinterpreted and immediately squelch any nasty or inappropriate remarks that may surface before any damage is done. Students could apply the established criteria to the performance of others during a playing test, composition performance, or improvisation session. In college, my teacher made everyone in the studio make one positive and one constructive comment about the students who performed in our weekly studio class. Although I struggled with this at first, this practice not only taught me to really listen to the performers, but continually having to come up with suggestions for others gave me ideas on how to improve my own playing. In the interest of time, the director could ask for two or three volunteers to comment on each performance, or perhaps instruct the person on either side of the performer to evaluate their playing instead.

Although the requirements for Standard Seven may seem easier to accomplish than some of the other Standards, the risk involved is just as great. However, when students are armed with the right criteria and have the proper mind set, this skill helps them to describe their feelings and constructively define their likes and dislikes. Students will not only benefit from this ability in a musical sense, but in other areas of their lives as well.