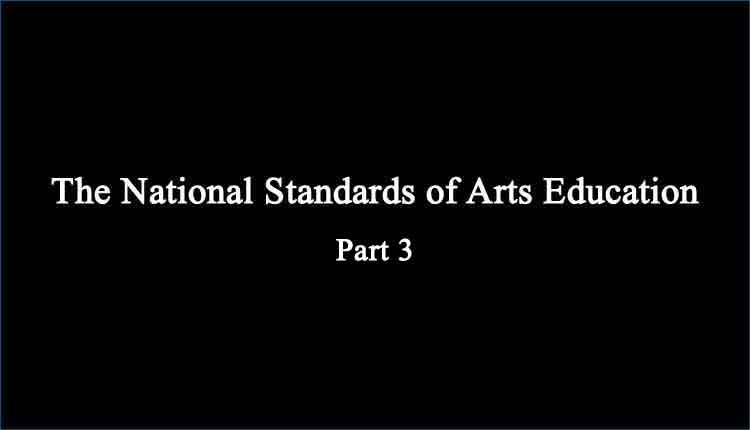 The Third Standard, “Improvising melodies, variations, and accompaniments”, is often overlooked in a concert band setting. The reasons for this are as wide and as varied as the technique itself. Classically trained musicians and teachers do not usually have much experience with improvisation (as the art form is more closely associated with jazz and similar musical styles) and may feel apprehensive or under-qualified to teach this to their students. Others think it would take up too much rehearsal time, while still others believe that improvisation is something that simply cannot be taught. While the last argument may be true in a literal sense, it is possible to teach students about the basics of improvisation, give them the knowledge and the musical tools necessary, and assure them that there is no right or wrong in improvisation and that anyone can do it. The ability to improvise is not limited to a select few, as some may think.

While improvisation is, by definition, an art that involves creating and performing music at the same time, there is in fact a great deal of theory and structure behind this seemingly spontaneous performance. This, in turn, offers educators several ways to approach improvisation in the classroom, and a number of different parameters can be set before an improv session, to help students focus on one or two variables at a time. Teachers can set any combination of the following variables beforehand to help structure the assigned activity: key, time signature, bass line/chord progression, or rhythm. Some may even want to write out certain pitches for students to use in an improvised melody.

An integral part of improvisation is the ability to play music by ear. Begin a lesson by asking for student volunteers to try and play a familiar melody (folk song, hymn, patriotic tune, classical melody, etc) by ear. Compile a list of these well-known tunes on the board, and group songs with similar tonalities, harmonies, or rhythmic patterns together for later comparisons. Select a melody from the list, give students a starting pitch, and have them attempt to play it together. It may take a few tries before everyone is able to find the correct intervals on their instrument, but this is to be expected. Once everyone is on the same page, the director should assign a new starting pitch and instruct students to perform the same melody in a different key. Repeat this exercise several times, and point out the similarities in each performance, particularly how– despite the key change– the relationships between intervals, rhythms, and harmonic progressions remain the same. Students may be surprised by how many pieces they are able to play by ear, and how easy it is to play a tune without having the music in front of them by simply listening to a recording or having the melody committed to memory.

The next step is to improvise variations on a familiar melody. These variations should be rhythmic, melodic, and eventually both. At first, it is best to have everyone in the band do this at the same time. While this approach may seem chaotic and even alarming to some, students are more comfortable learning to improvise in groups, to experiment and take chances without the pressure of making a mistake in front of their peers.

My favorite example of this type of improvisation, variations on a familiar tune, is executed annually by a friend of mine, a 6th-grade band director and a graduate of The Ohio State University. Every year, around mid-November, his class reaches the lesson in their band books that includes the march “Hail to the Victors”, which is the fight song of his alma mater’s arch rival in football, The University of Michigan. Instead of skipping the piece, he has all the students learn it, then uses the melody for an exercise in improvisation. After a brief harmonic analysis (a discussion of why certain notes sound good when they’re played together, along with a list of which notes work for each chord change), students are instructed to play the piece again, but this time they are to change the pitch of each whole note. They may choose any note they wish to play, as long as it is not one of the pitches found in the melody or the harmony- chromatic notes are encouraged. The cacophony that results not only teaches students the importance of consonant harmony, but ruining the odious fight song leaves the director with a smug sense of satisfaction.

To teach basic chord progressions, have students take a closer look at each group of familiar melodies that were categorized during the ear-training exercise. Ideally, the list should include songs in major and minor keys, modes, and pentatonic tonalities. The basic harmonies will likely be quite similar within each category and, when combined with discussion and examples of seventh-chords, inversions, and cadences, students quickly learn to recognize and anticipate the basic tension and resolution points of each chord progression. Students should also be able to play the bass lines to some of the afore-mentioned melodies, progressing to other chord tones until they can fully harmonize the accompaniment. The chord progressions can be written out before hand and passed out during class. Try assigning different parts of the chord to different instruments or sections, rotating the assignments to change the balance and so everyone has a turn playing every part of the accompaniment.

To involve the entire band in an improv session, have the majority of the class play these harmonic progressions while others play rhythmic or melodic variations on a piece they just played by ear. Let students choose from three or four melodies that will work with the chosen chord progression. Again, this exercise can be done in groups at first if students are uncomfortable improvising alone; always ask for and encourage individuals to volunteer, but don’t force the issue if students are apprehensive. There is a certain amount of risk involved with improvisation, and some students will be more willing to take that risk than others.

To teach students how to improvise without the comfort of a pre-existing melody, don’t be afraid to try a number of different approaches, set some limits, and provide other guidelines for their performances. For example, a call-and-response exercise is a great way to ease students into improvisation. The lesson could begin by clapping rhythmic patterns– the teacher claps a one- or two-measure pattern, and students respond by clapping out any combination of note values that seem appropriate. After a few rounds of call-and-response as a group, some students may be willing to provide individual examples. The rhythms could also be played on instruments; perhaps the call could sound as a concert F, and the response as a concert B flat. The question and answer (or antecedent/consequent) structure provides directors with a similar approach. Determine beforehand how long each phrase is going to be, and require (for example) that phrase one ends on the dominant, and phrase two on the tonic pitch or that students must use at least one syncopated rhythm in their answer.

As students progress to improvising over chord progressions, discuss the primary stylistic differences between some basic harmonic progressions. These may include twelve-bar blues progression, or a funk, rock, or even boogie-woogie beat. The use of silence, or rests, in melodic improvisations is often overlooked, and its importance should be stressed as much as more obvious ideas, such as tension and resolution. It is best to start students with a fixed set of notes, and set a four- or eight-bar limit for each improvisation. The notes of a blues or pentatonic scale are great for beginners, because all the notes in a blues scale fit into the chord progression, and the absence of half steps in a pentatonic scale prevent any combination of notes from sounding too dissonant.

The director’s single most important responsibility in teaching improvisation is to provide encouragement. Improvising is risky, and labeling a sour note or a weak resolution as a mistake will only make students feel more vulnerable. Instead, consider these as indicators of which concepts students do and do not understand or feel comfortable applying while improvising melodies, variations, and accompaniments, then shift the focus of future lessons to address these areas in more detail. The benefits and rewards of such creative performances should far outweigh any feelings of self-consciousness or embarrassment.

Finally, a discussion about and evaluation of individual improvisation attempts is crucial to the learning process. If students can identify which aspects of their improvised solo worked well and which were difficult, retain these insights, and apply these observations to future performances, then they will not only meet but excel at the activities outlined in Standard Three.