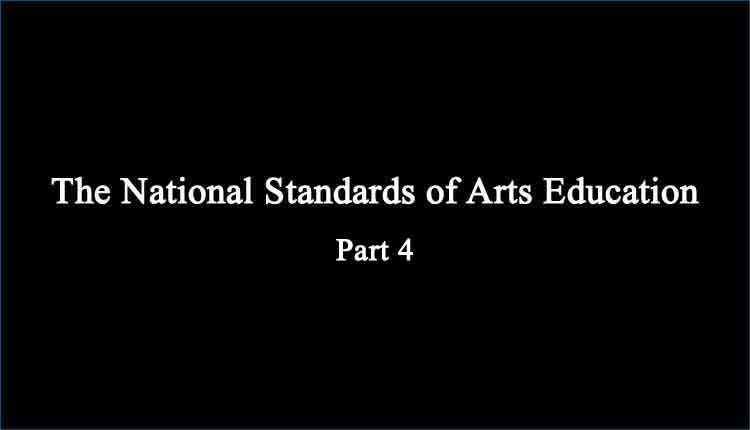 Standard Four, composing and arranging music within specified guidelines, was designed to make teaching composition to primary- and secondary-school students easy. However, this nearly foolproof approach can still be difficult to implement in an instrumental music program, where the main focus is on learning and performing printed, published music that is already in existence. Fortunately for directors, the majority of the requirements for this Standard need to be worked on and completed outside the classroom, and the recommended compositional activities do not cut into rehearsal time as much as the suggested assignments for some of the other Standards. Also, the degree to which the compositional guidelines may be specified helps to minimize the amount of in-class explanation.

Composition assignments for beginners needn’t be lengthy, and can often be used to gauge more than creative ability; elements as basic as filling each bar with the correct number of beats, the proper use of accidentals, and writing melodies that they can realistically play on their instruments all demonstrate comprehension of musical concepts that they learned in band class or in private lessons. Teachers can provide a four- or eight-measure staff with the appropriate clef, time signature, and key already written in. Some directors may want to write in the starting and ending pitches as well, or list a “key” of note values, articulations, and dynamics that students must include in the composition. Other directors might prefer to make more generalized guidelines, for example: “Please include two examples of dotted rhythms and do not use any whole notes” or “Use at least one accidental that does not normally appear in the key signature”. As with any creative subject, the instructions will naturally become more subjective and open to interpretation as students become more skilled in composition.

Composition can also be used to reinforce a new concept that was initially introduced in class. Some topics that lend themselves well to this type of activity include new time signatures, mixed meter, syncopated rhythms, chromatic notes, or a type of minor scale. Students could also compose strictly rhythmic pieces, which the teacher could compile and pass out to the rest of the class to test the group’s ability to sing, play, or clap out different rhythm patterns at sight. Teachers may also want to consider setting aside some class time for students to play their finished compositions for the rest of the band. This ensures that students will not only attempt to write something they can play, but that they will likely put more effort into the composition in hopes of impressing their peers.

As with improvisation, there is a certain amount of risk involved in composition, a sort of apprehension of the unknown. In fact, some of the activities outlined in Standard Three lend themselves well to Standard Four, and vice versa. For example, a director could ask students to compose a twelve-measure melody that fits over a standard blues progression, then perform the composition before improvising a different twelve bars of melody over the same chord progression. Or if students are unsure of how to begin composing, directors could use some of the same techniques employed to improvise variations on a familiar tune, asking students to re-write a well-known melody by changing, augmenting, or diminishing rhythms, adding notes or passing tones, ornamenting with grace notes and trills, or even using rests. Creating tension and properly resolving cadences, as well as incorporating rests (silence) into a composition is just as important when putting the notes on paper as it is when improvising. The act of writing and performing compositions provides two very different approaches to learning and understanding these concepts.

The guidelines for this Standard also suggest that students learn to compose with electronic media, using both sound production and notation programs. The reality that most school music programs face, however, does not include MIDI keyboards or computer labs equipped with music software of any type. In fact, few students even have access to a synthesizer. So, if directors have the available resources, they will likely make every effort to teach students how to use this equipment, but in most cases, this is not possible. Fortunately, there are so many other ways to teach composition, that students can still become quite adept at this skill using the old pen-and-paper approach.

Creativity manifests itself in many different ways, and some aspects of this Standard emphasize the use of non-traditional sound sources and notation as part of the composition process. Younger children, for example, respond quite well to graphic notation exercises, especially if they have not yet learned how to write using traditional notation. Have them invent a melody, then use a series of shapes, lines, or even colors to notate their melody in a way that they will not only remember, but will later be able to teach their classmates. This creative demonstration expresses even the most basic of musical elements in a whole new way. Non-traditional sound sources are an excellent alternative for students who may not be ready to tackle the challenges of arranging music for a number of instruments, and they also provide more options for enhancing the musical line. Everyday items such as soda cans, rubber bands, or pencils can easily be transformed into a noise-making instrument and can add clever and dramatic effects to an otherwise basic composition.

While the task of arranging music for different voices or instruments may initially seem easier to students than composing a piece from scratch, it in fact requires some advanced orchestration skills that must be learned and dealt with. Range and transposition are the most obvious obstacles, but other difficulties may crop up from time to time. Arranging music for a mixed ensemble is best delayed until students have successfully written lengthy compositions for their own instruments, and have a basic understanding of some general musical forms and structures, such as Theme and variations, rondo, binary, and ternary forms. It may be best to make arranging music an end-of-semester assignment, giving students plenty of time to learn about and employ the techniques mentioned above. I would even suggest making this a group project; that way, each student can teach the others in the group about the range, tendencies, and limitations of their instrument, which makes for less class time spent on orchestration matters as well as a stronger finished product.

Again, the most important thing teachers can do to help students learn to compose is to provide encouragement. Many teachers find they are pleasantly surprised, even impressed with the ability and creativity of their students, and even further surprised to discover that the students who seem to have a knack for composing music aren’t always the same students who excel at performing music. Students who struggle with composition serve as a barometer for how well the class as a whole grasps certain concepts, and their troubles highlight areas where further instruction may be necessary. The ultimate goal is to get students to realize just how important composition is to the music-making process as a whole, and to incorporate it into their musical routine.