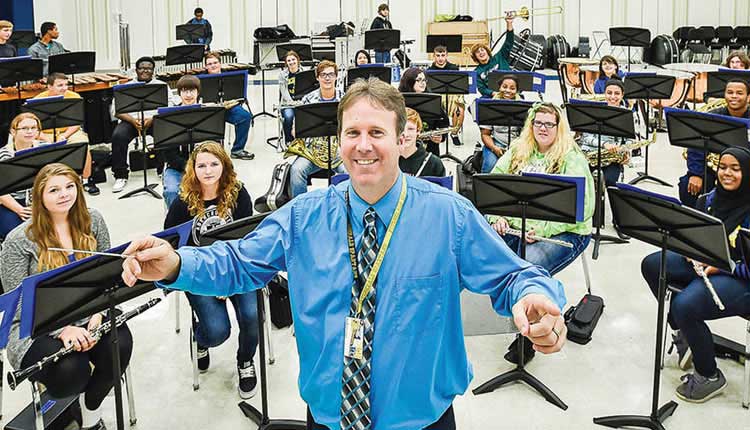 BD: How long have you worked at Warren Fitzgerald? What attracted you to the school/program?
Brian Roelandt: I have been a band director in the Warren Fitzgerald Schools for 11 years and have taught instrumental music for 18 years. I was attracted to the program at Fitzgerald because of the reputation achieved by their program and the opportunity to learn from directors Leonard Schemm, John Smith, and Phil Holm. I had always been impressed by the professionalism displayed by the directors and their students at various festivals/events. I was equally impressed with the high level of performance they displayed year after year.

BD: Can you discuss your responsibilities as director of the bands at Fitzgerald?
Brian Roelandt: Currently, I direct three high school concert bands and a jazz ensemble. Along with the bands, I teach basic piano and music theory. My other responsibilities include: Department Chairperson, K-12 Performing Arts Curriculum Chairperson, committee member of the District Advisory Committee, Mentor Teacher, and sponsor of the Fitzgerald Band Council. Sometimes it seems that the paperwork and committees take up 75 % of my job.

BD: In 2007, your program received the Education Excellence Award from the Michigan Association of School Boards and an Enterprise Award from the Grammy Foundation — two highly significant accolades. As the director of an award winning program, what do you think makes your bands stand out? What do you credit as the primary reason(s) for your school’s success?
Brian Roelandt: I believe our program has received these awards as a result of consistently planning for student achievement. The performances the bands are currently achieving are a result of the groundwork laid 5 years ago. Our bands stand out due to the expectation of professionalism and high quality performances. Students are reminded of the past successes and pushed to leave their mark in Fitzgerald history.

Another major factor for the success of our program has been the vision of the Fitzgerald School District when supporting the performing arts. The administration, school board, and community have always supported the music program even through economic down turns. As a result of our program’s success, we have been able to maintain a high-quality music staff. Currently we have outstanding teachers at every level including general music in the elementary schools. We have a staff whose passion for music is passed on to the students on a daily basis!

BD: The program has participated in several national — and international — trips, including San Antonio, New York, Toronto, and England. Why do you think it’s important for your students to have this kind of experience?
Brian Roelandt: The instrumental music program has given many students the opportunity to experience the world outside of the city of Warren. These experiences would not be available to them outside of our band program. Prior to a trip, students research the history of the city, sports teams, tourist locations, and cuisine. The best part of planning this type of trip is that our students get to experience geography lessons first hand rather than just reading about locations in books and on the internet. Sometimes the students make life-changing discoveries by participating with our program.

BD: Did any of those trips in particular really make an impact on the students involved? How?
Brian Roelandt: A recent trip to San Antonio gave the students an opportunity to travel by air to a destination much different than home. For most of the band members, it was their first experience flying and leaving the state of Michigan. We have two students who chose to attend Texas Universities as a result of our San Antonio tour!

BD: School Band & Orchestra Magazine named you as one of the 50 Directors Who Make a Difference. What did this distinction mean to you?
Brian Roelandt: I was extremely honored and humbled to be included on such a list. There are so many deserving directors in my surrounding area alone. This distinction caught me by surprise and caused me think about of the impact so many directors have had on me. I had an opportunity to gain knowledge and tricks of the trade from so many quality directors who gave freely of their time. I try to give back to my students with the same generosity my peers provided me. I am still in awe to have been included with such acclaimed directors.

BD: A recent graduate said the Fitzgerald symphony band was “like family.” How do you get your students to feel that kind of camaraderie? How does this affect the strength of your players and the band as a whole?
Brian Roelandt: I think the whole concept of our band being a family comes from the massive amount of time we spend together. I have an open door policy when students have issues they would like to bring to my attention. Sometimes it is music related, other times the students just need a person to talk to. It helps to listen to the students on their time because issues that could effect a rehearsal are many times settled.

We encourage the students to be involved in a variety of extra curricular activities and then we make time to support them in those activities. I enjoy watching an occasional volleyball match, swim meet or softball game. It’s nice to spotlight a student the next day in class! I think the students appreciate it, but it also lets them know that I care about them. It’s not always about whether they can play a Gb Major scale at 120 bpm.

BD: Is there anything that you learned from your former band teachers that you’ve incorporated into your own classroom?
Brian Roelandt: There is not enough room to list everything being used in my classroom that I have learned from former band directors. I was blessed to have had incredible examples to model my teaching after. I still ask questions of my Jr. High and High School directors Kathy Baas and Sandra Oset. Another person that I credit for focusing my teaching skills and summing up the total band experience is Ken Feneley, retired band director of Clare, MI. Student teaching in Clare, I learned that a small school district could be a musical powerhouse if given the proper leadership, dedication and hard work.

BD: How do you keep your students motivated to continually improve and strive to reach their greatest potential?
Brian Roelandt: I have to refer to a quote form Ken Feneley, “Set the bar high for your expectations. If the students start getting close to that bar, it’s time to raise it.” I have used that philosophy with every group I have every conducted. Students want to be successful. They just need to be guided in the right direction. Every so often, you get a stubborn group but the high expectations need to be clearly stated often. Success will always create more success. I try to find smaller goals for them to attain on the way to reaching higher success. My students also know that I will not give up on them. A bad rehearsal is like a wrong note, it’s how you solve the problem to avoid repeating it. We regularly have conversation about quality performance expectations and rehearsal expectations to re-enforce the positive behaviors.

BD: You’ve played in several local bands, including Stuck on Six, the Eastbridge Band, and the Henry Ford Band and are currently a member of the As Is Band. Can you talk about your involvement and what you find you gain in being involved in local music?
Brian Roelandt: I started teaching music because of my love for playing saxophone. For the first several years of teaching, the saxophone seemed to gather dust while I worked on brass technique and double reed fingerings. Then as I became more comfortable with the daily tasks of directing, I picked up my saxophone and started playing in a few groups. Playing in both recreational and professional groups has given me the opportunity to have a musical performance outlet. It has rejuvenated my ear to hear the highest level and to push my students to perform at that level.

BD: Is there anything that you’ve learned by working with high school students that has affected or changed you as a musician?
Brian Roelandt: I find it very rewarding when I see a former student or band parent and they tell stories of when they were involved in the band program. They don’t bring up winning awards or ratings at festivals, they talk about the great times they had on trips, stories about friends, a memory of a classroom incident, or the music that they heard on the radio that reminded them of band class. I think the awards and ratings sometimes distract a director’s focus of what we inspire every day. Make every day something that the kids will remember forever. Some day they will keep that memory alive for you!

BD: Anything else you’d like to add?
Brian Roelandt: I want to encourage directors to take a substantial role in arts advocacy. In the current conditions of our economy, cuts are affecting many music programs. The cutting of a 5th grade band or string program in a neighboring district is something that needs brought to the attention of professional organizations for support. The program you help save may eventually be your own. There are many ways to get involved with arts advocacy.