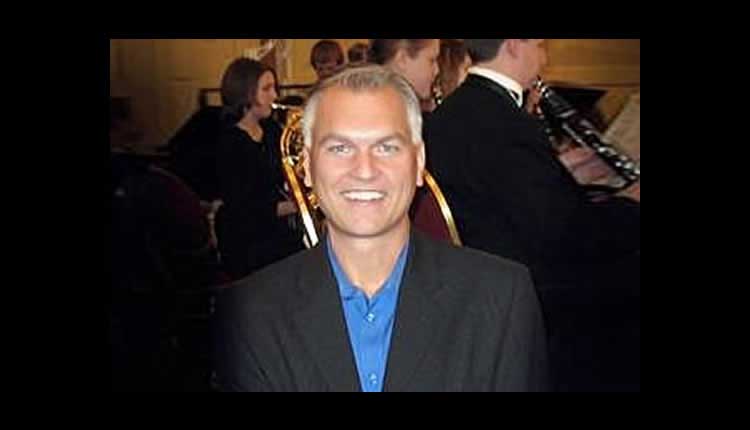 Rick DeJonge is an accomplished composer who has been writing music for orchestra and wind ensemble for more than 20 years. Based in Austin, Rick is one of the most sought-after composers for original music in both the film and video game industry. He travels the world conducting premieres. Banddirector.com took a moment to sit down with Rick to discuss his background, works, and upcoming projects.

You began composing music for wind ensembles from the early age of 13. What sparked your initial interest in music and composing?
My mother was a band director and musician and I was inspired by all the different sounds of the instruments from an early age. Whether I was watching the marching band at football games or going to rehearsals for the concert band, I was intrigued by all the different sounds of the instruments and how they sounded as individual colors – and then as an ensemble. I started teaching myself the piano at age 9 and by the time I was 11 and in the 6th-grade band, I would play different parts of my friends’ music on the piano. That is really when I started to understand not only the different transpositions of the instruments but also how the different instruments were joined together to create specific colors. By the time I was in 8th grade (13), I was writing small pieces for my middle school band.

Was there anyone in your early years who really encouraged you to follow your talents and pursue a career in music?
My middle school band director, Jay Crouch, was an amazing teacher. He went beyond the notes and rhythms when he taught by including theory and chord analysis too much of the music we would study. He took the time to explain why certain sounds blended well with different instruments and when things did not work well together. He encouraged me to look at scores and explained why certain arrangements were written in a specific way to create a certain sound. I was just fascinated with the whole concept. When Mr. Crouch became the high school band director, he again encouraged me to pursue as much music as possible. I wanted to learn about each of the instrument families more and so he’d let me play the drums in marching band, the piano and sax in jazz band, and the euphonium in the wind ensemble.

You hold degrees from both USC and Western Michigan University. How did this education aid you in your career?
I received a Bachelor’s of Music and a Master’s of Art at WMU – it’s an excellent music school and it was also the school my mother received her music degree. The head of the music program, along with other professors, allowed me to write pieces and experiment with different sounds. I was able to use rehearsal time with the ensembles to rehearse and run through my songs. I went through USC’s Film Scoring Program, which is considered the best program in the world for those wanting to pursue the field of writing background music. Since they only take 20 students into the program, I felt lucky to get in and was surrounded by outstanding composers from all over the world. Because USC is located in the center of Hollywood, the opportunities to meet and work with those in the film industry helped to get my career started in the industry.

Our readers will be very interested to hear that you write for the Boston Brass. Can you tell us more about that?
While working in the music industry, I met the Boston Brass and ended up becoming their artist manager for their respective instrument company. After a few years of working with them, while also pursuing a career in composing and arranging, they had heard some of my music and asked me to write an arrangement for them to play with a wind ensemble for a Christmas CD. They then asked for an original that they could use for playing with wind ensembles as guest artists. That piece is called, “Wayside Festival” and has become a very popular piece for the quintet to play with concert bands. Due to the success of that first piece, I have since written five others numbers for them to be a guest soloist with a full wind ensemble. Writing for a full brass quintet as a solo instrument to be accompanied by a full wind ensemble is challenging and the most difficult aspect is keeping both groups active and engaging without stepping all over each other. I enjoy this challenge and know there is not a lot of literature currently published that allow for this type of a combination.

You composed the piece “Flight” for the USAF Band of the Golden West and the Boston Brass. Can you talk about what inspired that piece?
The USAF Band of The Golden West had a concert near Los Angeles while I was attending the film scoring program at USC. The Boston Brass, the featured guest at the concert, were performing two of my pieces. I attended the concert and met the conductor, Mike Mench who commissioned me to write a piece for them to play with the Boston Brass for a Las Vegas tour. The piece is called “Flight” and was written to illustrate the elements of flying from the take off, to the soaring, and through the landing. It was by far the most difficult piece I had written as I wanted to feature the great band from the Air Force as much as possible, while still keeping the talented Boston Brass as the soloist.

How did you become involved in composing for films?
Composing background music for plays, video games, television, or film was something I always wanted to do since I was in elementary school. As I learned how music was written for particular colors and sounds, I also learned that these sounds created specific feelings and emotions. I wanted to replicate these emotions and learn just what kinds of colors and combinations of chords created them. In 5th grade, as I was teaching myself the piano, my younger brother and I had started collecting 8mm silent films to show on our projector. These were 2-3 minute videos of actual movies and I would write and record music on a tape recorder from the piano to go with the film and then have friends come over and watch them. We also added sound effects to go along with the music since the films were silent. The experience from creating the music for these 8mm films started my passion for film music and wanting to someday score the real stuff.

Who are your compositional influences?
I have a wide range of interests and my biggest influencers are Mozart, Glenn Miller, Claude T. Smith, Henry Mancini, and Elmer Bernstein.

You work serve as the Program Development Coordinator for Jupiter Band Instruments (JBI). How did you become involved with the company?
I have worked in the music industry for about 10 years, having started with United Musical Instruments. While in the industry, I was able to make important contacts with other composers, musicians, and educators that helped launch my writing and recording career. JBI is a major player in the music industry and recruited me from my former employer. Since JBI is located in Austin, it allowed me to stay working in this amazing industry with a fantastic company, as well as relocate to a music and film city.

I hear you conduct a great choral group in Texas! Can you tell me more about your choral writing and conducting?
Austin is full of talented musicians and I am fortunate to have so many in the adult choir I conduct for my church. We have performed at the White House twice and got the opportunity to premiere, not only my works, but works from other choral composers as well. Most of the writing I do for the church is for the orchestra, as I do all of the arrangements for the choir for services. I also arrange music for groups I bring in to accompany the choir, such as the world famous trombone choir from the University of Texas. I wrote two 30-minute cantatas for the church this past year and will be doing more in the future. I wrote my first cantata for a church in Michigan when I was 21 and have continued writing church music periodically for the last 20 years.

Do you have any new works on the horizon?
I am currently working on some demo music for a director for a new film called, “Revenge of the Silver Moon” by Do or Die Pictures. The movie is set to star Willie Nelson, Owen Wilson, Jessica Simpson, and Woody Harrelson and will be filmed in Austin, TX. I also have a premiere at the Midwest Clinic in December with the Boston Brass and Clint Small Middle School called, “An Epic Expedition” which was completed a few weeks ago. I wrote a new piece to be premiered with Indiana State’s Wind Ensemble in February, which I am getting ready to start and I have also been contacted by another Air Force band for a project they are doing which will include both concert music and some background music for an Air Force film.

Special Note: Rick DeJonge will partner with Banddirector.com and the Wisconsin Music Educators Association for a special band commission project to begin early January 2009. The premiere performance of the commission work will be featured at the WMEA convention October 30, 2009. Read more

Be Creative – Get Results!

A Personal Credo For The Professional Music Educator