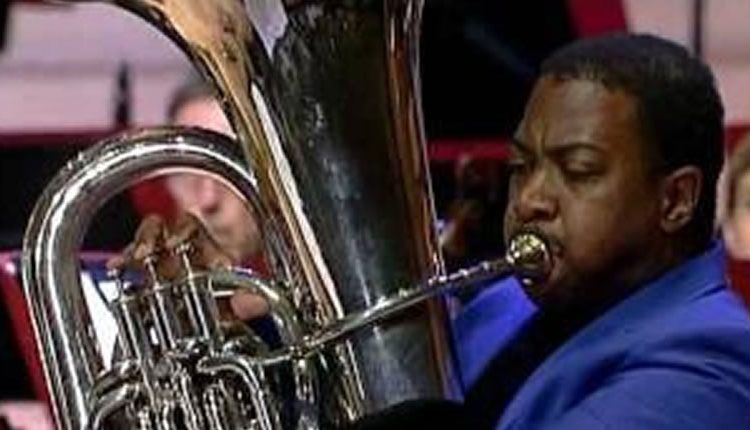 Evidently, integrating a clear and rhythmically decisive breath into a cue can be quite unnatural to many brass students. This is, most likely, simply a result of a lack of practice. When musicians are alone practicing their individual part they rarely incorporate a communicative breath into their drills. When put in a rehearsal or performance situation they then must suddenly add something new to what they’ve practiced in private. When others are relying on you is not the time to be trying to do something new.

The sound of the inhale should begin on the ictus before playing commences, that is, squarely on the second beat of the cue (again, the duration of a beat depends on the time signature, tempo and character of the music). Remember, it is of vital importance that the Leader firmly establishes the tempo and counts off in his or her head before attempting to give the cue. The sound of the start of the inhale will aid the Followers in establishing where the Leader’s ictus is, thus where the following attack should occur.

When a Leader attempts to extend the sound of the inhale over the entire beat they can run into one or two problems.

1. Managing the switch from the fastest part of the inhale to an exhale can be difficult and result in an explosive and uncontrolled attack.

2. The sound of a long inhale can give the misguided impression of a slower tempo.

Whenever I introduce the notion of grunting in performance to brass students it always creates a half confused/half disgusted look on their faces. It is important to understand that this “grunt” from the Leader is only for the Followers to hear, not the audience. The reasons that a grunt is effective and efficient are as follows:
Its placement can be more precise than using words. A grunt can be sharply accented to clearly show where the Leader is placing his or her ictus (i.e., where the beginning of beat occurs). Conversely, saying “one” or “three” takes slightly longer and both words begin with a soft syllable. Since the goal is to give a rhythmic point of reference, a more concentrated sound is more effective.
Pronouncing words distorts the embouchure. By grunting, the embouchure can remain in the ready position.

When a piece starts in 3/4, 5/4 or begins with one or more pick up beats, less experienced Leaders often misspeak the beat number in the cue, subsequently confusing the Followers. A grunt is not time signature dependent and relieves the Leader of having to think of what to call the beat which lay two counts before the entrance.

Now the audible inhale on the beat preceding the first note, not only allows the Leader to take a breath and encourages the ensemble to breathe together, but also reinforces to the Followers where the ictus is and, therefore, where to place that first attack.

Brass Players Are Not Neanderthals
Despite grunting from the days when we lived in caves, using a grunt as part of a cue is not intuitive for many brass students and I must often explain to them how to do it.

The pronunciation is “uh”. Accent the beginning of it and shorten the sound as much as possible—the idea is to produce a very precise and compact sound that serves as a model for the level of precision of the ensemble’s pending entrance. The sound should be made….