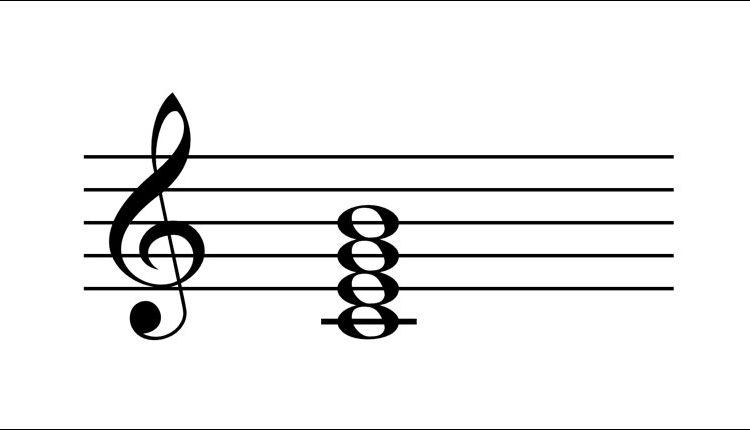 There are few universal agreements about chord symbols, only learned traditions and (at times) common sense.

The musical examples shown are not comprehensive: there are suspended chords, chords mixing -5 and +9 (or the reverse), more polychords, foreign-bass, and others not shown here.

A symbol is only as good as your manuscript. Use “∆7” for Major 7 only if your triangle won’t look like a “o7” to the reader! Using a dash for minor (“C-“) may be easily overlooked—or added to major chords by a dirty photocopier! Examples shown are among those most clear.

All natural 5ths are optional, especially in +11 chords.

9 replaces 7 in the symbol but assumes there is a 7th in a ninth-chord structure. Exception: If the chord is minor but the 7th is to be Major, the Major 7 is specified in parentheses.

11 replaces 9 in the symbol but assumes there is a natural 9th in an eleventh-chord structure. Exception: If the 9th is to be altered, it must be specified in parentheses. And when the triad is major (as in a major or dominant chord), the 11th has to be raised (so as not to create a suspended fourth simultaneous with the third) and specified (“+11”).

13 replaces 11 in the symbol but assumes there is a natural 9th. (Exception: If the 9th is to be altered, it must be specified in parentheses.) It assumes that a natural 11th is compatible with a minor-triad structure but does not require that the 11th be played in the chord. It does not assume an 11th in a major-triad structure (as in a major or dominant chord): the +11 (raised so as not to create a suspended fourth simultaneous with the third) is colorful enough to change substantially the sound of the chord and therefore must be specifically requested if desired-i.e., Major 13 and Dominant 13 chords need not include the +11.

Though one can certainly write “Co9” or “Co11,” confusion often results: “Is the 9th or 11th itself diminished?” (No.) A clearer means is to notate the chord up to the 7th, then parenthesize extension numbers “(add 11 9)” or the actual pitches “(add F D).” Either the numerical or pitch name is acceptable; I have included both in the examples. Exception: Notating a half-diminished chord as a minor-seventh flat-five chord offers a clear option: “Cm11(-5).”

Though one can use “aug” within seventh or ninth chords, using “+5” instead makes notating extensions much easier (see examples).

A reference to “#9” or a “b5” does not necessarily reflect the accidental in the chord. If the chord is an Ab chord, the “b5” is D natural!

The “b13” is used by some in place of a “#5.” Many find “b13” less useful. Is it a “b13” because a natural fifth is present…or because it wishes to descend to the following voicing (rather than ascend as a #5 might)…or both? Again, there is no international accord.

Though no universal definition exists, altered chords certainly include those which raise and lower the 5th and the 9th; thus it is easier to write “C7 alt” than “C7 (+9 -9 +5 -5).” Altering three of the four certainly sounds altered; but if a composer specifically does not want the -9, “C7 alt” will not suffice. Altering two of the four usually calls for a specific listing, though the “altered” scale may still be a fine melodic fit by an improviser.

Stacking triads high enough can result in doubling certain tones, which is not necessary. I have included the doubled tones merely for perspective.

Eleventh chords basically contain six notes—or two triads. For example, C Maj9(+11) is a B minor triad atop a C major triad; this concept can be useful for arranging as well as improvising.

Just because any of the above might be within the mainstream jazz-chordal tradition doesn’t mean exceptions aren’t commonplace beyond the “chord primer” outlined here. A lot of composing, much less improvising, takes place on a linear basis and happily defies restriction. Stop a recording of a Dixieland group in its shout chorus; and you’ll likely find a passing major 3rd over a minor, or a passing natural 9th next to another player’s flat 9th—and no one runs screaming in terror out of the room! Composers from Ellington to Brookmeyer and beyond regularly write textures that defy a “neat” vertical analysis. But one must learn the language before stretching its expression further.

Resources abound in text and Internet media. Consider The Jazz Language by Dan Haerle, The Jazz Theory Book by Mark Levine, and the Jazz Handbook by Jamey Aebersold (free with any other Aebersold purchase). All are available through the Aebersold catalog (800/456-1388, <www.jazzbooks.com>), with the first two also available from your local music dealer.

Antonio J. García is an Associate Professor of Music and Director of Jazz Studies at Virginia Commonwealth University, where he directs the Jazz Orchestra I; instructs Applied Jazz Trombone, Small Jazz Ensemble, Music Industry, and various jazz courses; founded the B.A. Music Business Emphasis (for which he serves as Coordinator); and directs the Greater Richmond High School Jazz Band. An alumnus of the Eastman School of Music, he has received commissions for jazz, symphonic, chamber, and solo works—instrumental and vocal-including grants from Meet The Composer, The Commission Project, The Thelonious Monk Institute, and regional arts councils. His music has aired internationally and has been performed by such artists as Sheila Jordan, Arturo Sandoval, Bobby Shew, Denis DiBlasio, James Moody, and Nick Brignola. Composition/arrangement honors include IAJE (jazz band), ASCAP (orchestral), and Billboard Magazine (pop songwriting). His works have been published by Kjos Music, Kendor Music, Doug Beach Music, Walrus, UNC Jazz Press, Three-Two Music Publications, and his own garciamusic.com, with five recorded on CDs by Rob Parton’s JazzTech Big Band (Sea Breeze and ROPA JAZZ).

A Bach/Selmer trombone clinician, Mr. García has freelanced as trombonist, bass trombonist, or pianist with over 70 nationally renowned artists, including Ella Fitzgerald, George Shearing, Mel Tormé, Doc Severinsen, Louie Bellson, and Phil Collins—and has performed at the Montreux, Nice, North Sea, Pori (Finland), New Orleans, and Chicago Jazz Festivals. He has produced recordings or broadcasts of such artists as Wynton Marsalis, Jim Pugh, Dave Taylor, Susannah McCorkle, Sir Roland Hanna, and the JazzTech Big Band. An avid scat-singer, he has performed vocally with jazz bands, jazz choirs, and computer-generated sounds. He is also a member of the National Academy of Recording Arts & Sciences (NARAS). A New Orleans native, he also performed there with such local artists as Pete Fountain, Ronnie Kole, Irma Thomas, and Al Hirt.

Mr. García is Associate Jazz Editor of the International Trombone Association Journal. Within the International Association for Jazz Education he serves as Past Editor of the Jazz Education Journal, Past President of IAJE-IL, past International Co-Chair for Curriculum and for Vocal/Instrumental Integration, and served as Chicago Host Coordinator for the 1997 Conference. His new book, Cutting the Changes: Jazz Improvisation via Key Centers (Kjos Music) offers musicians of all ages the opportunity to improvise over standard tunes using just their major scales. He is Co-Editor and Contributing Author of Teaching Jazz: A Course of Study (published by MENC). He served on the Illinois Coalition for Music Education coordinating committee, worked with the Illinois and Chicago Public Schools to develop standards for multi-cultural music education, and received a curricular grant from the Council for Basic Education. He has also served as Director of IMEA’s All-State Jazz Choir and Combo and of similar ensembles outside of Illinois. He is the recipient of the Illinois Music Educators Association’s 2001 Distinguished Service Award.

Of his jazz curricular work, Standard of Excellence states: “Antonio García has developed a series of Scope and Sequence of Instruction charts to provide a structure that will ensure academic integrity in jazz education.” Wynton Marsalis emphasizes: “Eight key categories meet the challenge of teaching what is historically an oral and aural tradition. All are important ingredients in the recipe.” The Chicago Tribune has highlighted García’s “splendid solos…virtuosity and musicianship…ingenious scoring…shrewd arrangements…exotic orchestral colors, witty riffs, and gloriously uninhibited splashes of dissonance…translucent textures and elegant voicing” and cited him as “a nationally noted jazz artist/educator…one of the most prominent young music educators in the country.” Down Beat has recognized his “knowing solo work on trombone” and “first-class writing of special interest.” The Jazz Report has written about the “talented trombonist,” and Cadence noted his “hauntingly lovely” composing as well as CD production “recommended without any qualifications whatsoever.” Phil Collins has said simply, “He can be in my band whenever he wants.”

A member of the board of The Midwest Clinic, Mr. García has adjudicated festivals and presented clinics in Canada, Europe, Australia, and South Africa, including creativity workshops for Motorola, Inc.’s international management executives. He has served as adjudicator for the International Trombone Association’s Frank Rosolino Jazz Trombone Scholarship competition and Kai Winding Jazz Trombone Ensemble competition and has been asked to serve on Arts Midwest’s “Midwest Jazz Masters” panel and the Virginia Commission for the Arts “Artist Fellowship in Music Composition” panel. He has been repeatedly published in Down Beat; Music, Inc.; The International Musician; The Instrumentalist; and the journals of MENC, IAJE, ITA, American Orff-Schulwerk Association, Percussive Arts Society, Arts Midwest, Illinois Music Educators Association, and Illinois Association of School Boards. Previous to VCU, he served as Associate Professor and Coordinator of Combos at Northwestern University, where he taught jazz and integrated arts, was Jazz Coordinator for the National High School Music Institute, and for four years directed the Vocal Jazz Ensemble. Formerly the Coordinator of Jazz Studies at Northern Illinois University, he was selected by students and faculty there as the recipient of a 1992 “Excellence in Undergraduate Teaching” award and nominated as its candidate for 1992 CASE “U.S. Professor of the Year” (one of 434 nationwide). Visit his web site at www.garciamusic.com