The Selection and Care of Oboe Reeds Allison Baker 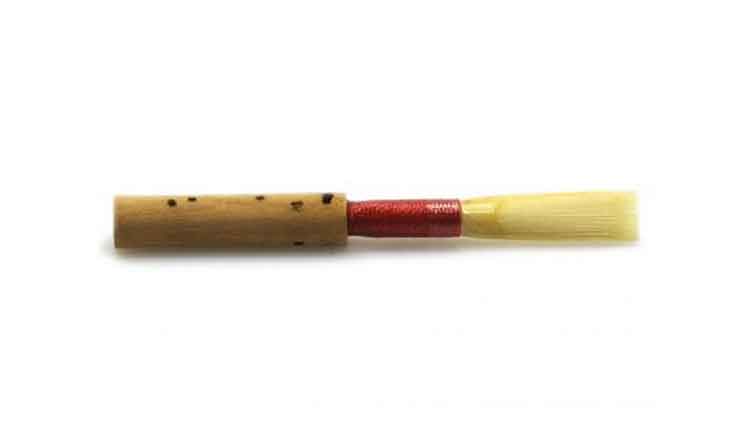 It’s no secret that oboe reeds are the most temperamental component of the instrument, an ever-changing variable that, even for professional players, rarely remains consistent from one week to the next. Some people even claim that the reed is connected in some way to 90% of all problems that oboe players encounter. This is especially true for young players who don’t know what to look for when purchasing an oboe reed. While the only sure-fire way to find a good reed is to play on it, for obvious reasons, these are not items people can try before they buy. However, there are some simple ways to determine whether a reed is likely to play, as well as steps that can be taken to prolong the life of a good reed once one is found. I have seen too many students who go to their local music store and buy three to five reeds at a time, in hopes that one or two of them will actually make a sound. The following tips can prevent students and directors from wasting money on bad reeds.

Even good reeds have a relatively short life span; a typical reed can only withstand one or two weeks of daily use, and replacement costs can get expensive. The commercially made reeds that most local music stores sell cost between $8-$12 and are adequate at best. Professional, hand-made reeds are more consistent than commercial brands; professional reeds cost $13-$18, but because they sound better and last longer, the price difference evens itself out over time. University students, private teachers, and even local professionals often make and sell reeds to generate a little extra income, and most double reed specialty stores (such as Forrest’s, Jones Double Reed Company, Nielsen’s, and Midwest Musical Imports, to name a few) carry handmade oboe reeds as well. Some of these companies even offer discounts on reeds ordered in bulk.

To add to the confusion, oboe reeds are not graded by strength the way most single reeds are, although some vendors do classify reeds as soft, medium, and hard. The soft reeds allow players to use less air than they should, and only promote bad habits because the opening collapses under the pressure placed on the blades by a proper embouchure. By contrast, the hard and extra-hard reeds usually need to be scraped or otherwise adjusted by a professional because this machine setting leaves too much cane on the reed, which prevents it from vibrating freely. Beginners should never start on anything easier than a medium-soft reed, and switch to a medium or medium-hard reed within a few months.

Another tell-tale sign of a poorly made oboe reed is the presence of a wire wrapped around the base of the cane. Although the flared cane shape and larger size of English horn and bassoon reeds necessitate an adjustment wire or two to keep the reed opening intact, the long, narrow shape and defined scrape of an oboe reed should hold the blades open without assistance. Oboe reeds with wires are almost always too soft to play well because the reed opening is likely to collapse without the wire to hold it open.

Other visible indicators of a low-quality reed are the lack of a spine down the middle of the blades, severely overlapped blades, reeds that are separated or open on the sides, and openings that are too narrow or too wide. The blades should overlap slightly to seal the reed from base to tip; reeds that come with a bit of fish skin or plumber’s tape around the base of the reed are likely hiding small leaks, and a leaky reed usually has other problems as well. Look for reeds with a symmetrical opening, neatly and tightly wrapped thread, and be sure that the cane is tied onto the corked staple straight.

New store-bought reeds come in airtight plastic vials but should be stored in a reed case, not the original packaging, to prevent mold growth. Before playing, soak the reed in water, not in the mouth, for three to five minutes because sucking on reeds breaks down cane fibers and makes the reed more likely to crack. A water-tight container, such as a 35-mm film canister, fits easily inside most cases and is easy to come by. I suggest dipping the reed in water and setting it aside to prevent over-soaking; the cane will absorb the water in a matter of minutes.

Students should throw out any reeds that are more than a month old, even if they still seem to work. Once a reed starts to break down, the opening closes and the pitch rises sharply; the embouchure has to overcompensate for a dying reed, which can lead to bad habits. Also, oboe players should have at least two working reeds at all times; rotating reeds gives the cane fibers more time to recover between uses, which helps make the reeds last longer.

Reeds will always be a source of contention for oboists. However, by avoiding poorly manufactured reeds, buying hand-made reeds whenever possible, and using the above guidelines to take care of working reeds, amateur oboe players are much more likely to find good reeds.

Tips for the Young Oboist and Their Band Directors