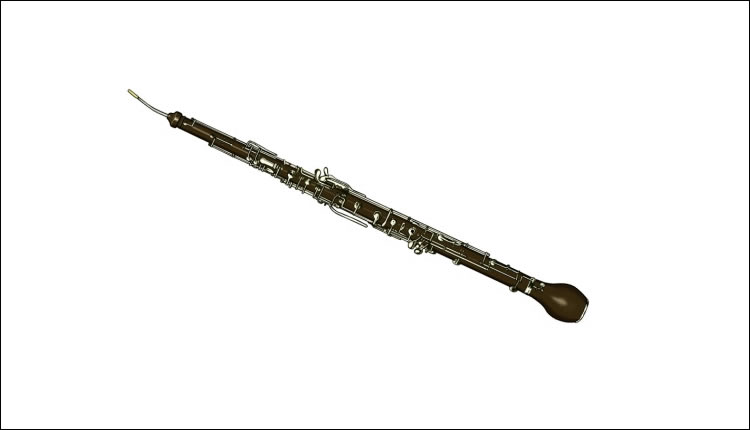 Like a beginner on any instrument, the beginning English Horn player is often unsure as to why it sounds bad, even if he or she is a fairly competent and experienced oboe player. Many times, players blame the instrument when in fact they aren’t blowing enough air, or blame themselves for deficiencies that are due to a useless bocal, etc. Everything on English Horn works a little differently from the oboe, so let’s take a look at each piece of equipment (including the player) individually.

Owning an English Horn is an expensive proposition, so most occasional players rely on borrowing an instrument from a school or a colleague. Because of intermittent use and a larger bore less sensitive to minute distortions, English Horns tend to stay in service much longer than oboes. It is not uncommon for schools or universities to own instruments that are more than thirty years old. There is nothing wrong with this, of course, providing the instrument has been well maintained. Unfortunately, public schools often buy cheap, inferior instruments and keep those for a long time. If you aren’t certain of the instrument’s condition, bring it to your teacher or an expert and get advice. If it needs repairs, get them done. Schools frequently have no budget for this, but try. It will save the school money in the long run, especially if you succeed in having the instrument sent to a repair person who specializes in oboes. General repair people at full-service music stores don’t always have the necessary experience.

Since oboes don’t have bocals, the importance of this piece of equipment is often overlooked by oboists. A bad bocal can make a good reed and instrument useless. On the other hand, a good one can distinctly spruce up even a mediocre horn. If you play English Horn more than once or twice a year, a good bocal is a wise investment. Bocals made by Mark Chudnow Woodwinds, John Symer, Hiniker, and the Dallas Bocal Company are all excellent. Most dealers will send you several to try for a week or so. Cost is around $150-200. There are other excellent makers, also. It is helpful if you are able to match the bocal to the instrument – a great bocal on one horn is not necessarily a great bocal on every horn.

A few signs of a bad bocal are:

A general lack of resonance and focus, particularly on high notes.

Uncontrollable sagging when making diminuendo on C in the middle of the staff (third space).

Don’t be completely at the mercy of the people loaning you stuff. Buy your own bocal.

English horn reeds differ from oboe reeds in two important respects: they are not as “finished” as oboe reeds, and they generally carry a wire.

Many oboe reeds have extremely thin tips and a rather thin back, especially just below the heart. If you make an English horn reed this way, it will sound small and dull, and may well be flat. Instead, make a reed that works well with good balance, but with less contrast between the three main areas. In other words, build your reed with a slightly thicker tip, slightly lighter heart, and a slightly thicker back. In addition, the difference in thickness between the top of the back and the lower portions is not as pronounced. If viewed from the side, the “waistline” of the reed that appears just below the heart is lower down. If you want to think in terms of oboe reeds, make a reed that plays well but is not “refined” it should still have a little bit of raucousness.

English Horn reeds should be wired. The wire is not used to control the opening of the reed. If the opening is wrong, the wire may help a little, but the reed will still have problems. Rather, the wire stabilizes and focuses the notes above the staff. Often, this allows you to remove more wood from a reed that’s a bit stiff but that would be too flat without the wire. Use #24 gauge brass wire, wind it around twice, and tighten with needlenose pliers. You can buy the wire in the hardware store – it’s cheaper than “reed wire.”

Many reedmakers put the wire on the blank before scraping at all. I prefer to add the wire later if necessary, mostly because it gets in my way during the scraping. Don’t wind it on so tightly that it grips all the way around the reed; stop as soon as you feel it gripping the sides. Don’t put it up too high on the reed: 5-6 mm from the string (in other words, just into the beginning of the scraped area) is high enough. The wire will usually slide around when the reed is dry, but return to its proper position when the reed is soaked.

Much of what we do physically on the oboe could be characterized as damage control. We’re trying to prevent the sound from becoming too shrill, too raucous, too piercing. Most people, when their oboe playing isn’t working well, sound too thin or harsh.

Most English Horn players in trouble have the opposite problem: the sound is fuzzy, wooden, dull and won’t project at all. The position of the English Horn in the orchestra (amongst the violas, who are usually playing in the same range) doesn’t help. So, two things are vital: blow firmly, and don’t cover very much with your embouchure. If you played oboe the way English Horn sounds good, it would sound unpleasantly rough and raucous. If you reverse it and play English Horn with the correct oboe technique, the EH would sound stuffy and tiny. It is quite easy to overblow the oboe; it takes real power to overblow the English Horn. Or, at the opposite extreme, it is possible (though not desirable!) to “peep” on the oboe and get away with it. On the English Horn, you can forget it. Don’t be shy. Blow.

One more thing: the English Horn is a different instrument. It needs practice. Only the fingerings are familiar. Strive to play the English Horn with the same facility and flexibility that you have on the oboe. Don’t restrict your English Horn practicing only to English Horn repertoire. Most of the orchestral excerpts are technically very easy. Play Ferling etudes, Mozart concerto, baroque sonatas, technical warmups – whatever you can think of until the instrument feels comfortable and familiar to you.

Martin Schuring has held orchestral positions with the Hong Kong Philharmonic, The Florida Orchestra and the Phoenix Symphony Orchestra. Since 1980, Schuring has been a regular participant at the Grand Teton Music Festival, playing English Horn and oboe in the Festival Orchestra as well as making frequent appearances on the Festival’s chamber music series.

In other summer activities, he has participated in the Bach Aria Festival, served as professor of oboe at the Londrina Music Festival in Brazil, and performed as principal oboe of the Orchestre Philharmonique Rhodanien and professor of oboe at the Academie Europeénne de Musique in Tournon-sur-Rhône, France. Both as soloist and as a member of the reed trio, Ocotillo Winds, Martin Schuring performs at universities and concert venues throughout the United States and abroad. Schuring has recorded for Philips, Koch International, and Summit Records, both as soloist and as an orchestral player. Recently, he recorded the world premiere of Oboe Concerto, Op. 57 by Eric Funk with the Prague Radio Symphony on the MMC label.

Martin Schuring has published articles in several journals, including The Double Reed, and Flute Talk. He recently prepared a new edition of the Barret Oboe Method, published by Kalmus. He has performed at every Conference of the International Double Reed Society since 1997, including featured concerto performances at the 2000 conference in Buenos Aires, and the 2001 conference in Morgantown, WV. He holds the office of First Vice President on the IDRS Executive Committee. Together with bassoon colleague Jeffrey Lyman, Martin Schuring hosted the 1998 Conference of the International Double Reed Society at Arizona State University where he is Associate Professor of Oboe. Mr. Schuring studied at the Curtis Institute of Music with John de Lancie.