The University of Michigan Bands: The Next Generation

An interview with Michael Haithcock and Steven D. Davis 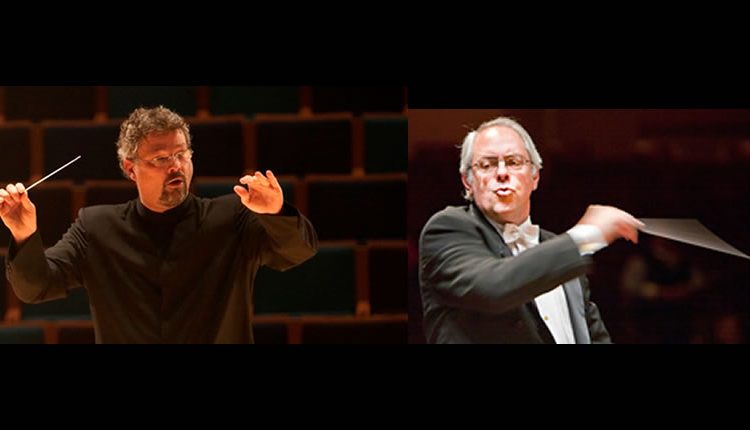 The University of Michigan Bands: The Next Generation
An interview with Michael Haithcock and Steven D. Davis

There are two new faces in the band department at the University of Michigan in Ann Arbor. Director of Bands and Professor of Conducting Michael Haithcock, who conducts the Symphony Band and Associate Director of Bands and Assistant Professor of Conducting Steven Davis, who conducts the Concert Band, both took the podium in 2001 and have been working- with each other and with their respective ensembles- to further the legacies and uphold the traditions of their now-legendary predecessors.

Michael Haithcock was born in Kannapolis, North Carolina, and went to East Carolina University as an undergrad, at the suggestion of his high school band director; “That’s where my band director said I should go, so that’s the only school I applied to.” When Haithcock realized he could earn $1,000 more a month teaching high school bands with a master’s degree, he planned to simply continue his studies at ECU. However, his former professor insisted he’d be crazy to stay, so he enrolled in the graduate program at Baylor University to study conducting with the new director there, Richard Floyd, whose high school band in Richardson, Texas, was a fabulous model. Haithcock wound up becoming the successor of the very professor he studied under, and was Director of Bands at Baylor University for 19 years before coming to the University of Michigan.”I went [to Baylor] for two years, and stayed for 25,” he recalls.

Steven Davis was born and raised in West Palm Beach, Florida, and earned his bachelor’s in music education from Florida State University. He taught in the Florida public schools for six years before pursuing a master’s degree in wind ensemble conducting from the University of Minnesota, where he is currently working toward his doctorate. Davis studied under Craig Kirchhoff at Minnesota for three years before being named to the faculty at the University of Tennessee – Martin. Shortly after that, he received a call from Michael Haithcock about an interim band director position that had opened up at the University of Michigan. He accepted the one-year position, and won the national search that was held the same year, which made the job permanent.

Haithcock and Davis both crossed paths William D. Revelli and H. Robert Reynolds when they were students. “My first contact with Revelli was in high school,” recalls Haithcock. “Our band director came into our marching band rehearsal one day, and was almost quivering when he said: ” I just found out who the judges are going to be at the marching contest and, God help us, one of them is William D. Revelli from the University of Michigan.'” He then went on to tell us that nothing we did would be good enough unless we worked harder than we had ever worked before, because Revelli would chew us apart. We had no idea who this guy was, but obviously somebody did, and that was a great motivator for us. So we worked as requested, and in the end, he gave us a glowing report, and all was right with the world.”

“When I went to college, Revelli had just retired, and the word from my college band director was the this great era of bands was over. He was always talking about Revelli’s methods, which was basically fear and trembling. I believe he’s remembered most, though, for the amount of new repertoire he created and the quality of sound produced by his ensemble. In his last three years at Michigan (1968-1971), I think Revelli conducted Music for Prague by Karel Husa 13 times. When I was in college, from 1972-1976, that was still a relatively new piece, so those performances were really quite ground breaking.”

“I was fortunate to go to a great high school, and we had a terrific director named Ubaldo Montesino who was actually a cousin of Gloria Estefan. (“That’s why he conducts 7/8 so great!” interjects Haithcock.) “He used to play LPs of the Symphony Band for us all the time, so I began listening to Revelli’s recordings in the ninth grade. I first saw Revelli conduct at a band symposium. I saw him go through rehearsal ideals, where he kept mentioning tone, tone, and tone. He went right down the line. The standard in his mind was exceptional. I believe this made me begin to think about sonic fundamentals at a very young age.”

Haithcock continues: “In 1975, my college director at East Carolina went to the CBDNA conference. When he came back, he told our classes: ” I just heard from the new Revelli, this guy named Bob Reynolds. He did a score presentation of George Washington Bridge by William Schuman that left everyone dumbfounded. He knew that score better than a theory teacher.”‘ That was my first introduction to Reynolds.

“After my first year of grad school, in 1977, Reynolds came to conduct a summer camp at Baylor University. I went to the first rehearsal to watch him conduct, and I was really amazed. He was the first band director I’d seen who conducted the band like an orchestra. He conducted the music, not the problems.”

“Reynolds once judged my high school band,” recalls Davis, “and when we played the “Washington Grays” march, he became very excited on the tape (which I still have to this day) because that was a march that he really loved. Fortunately, he said that our band played it just right. On another occasion, Reynolds was one of the clinicians at the Tri-State Band Festival held at Florida State University when I was a student there. I was able to observe him in rehearsal for two days and feel very fortunate to have done so. I do not think I ever got up out of that chair. I thought he was such a great musician.”

The band program at Michigan continues to thrive under expert instruction, but surprisingly, neither director planned on teaching at the university level. “I had no intention of being a college band director,” says Davis. “Had you ever told me I would be on staff here, I wouldn’t have believed you. I wanted to be the greatest high school band director on the face of the Earth, and I’d probably still be there if my school hadn’t gotten a new principal who didn’t embrace that want.”

“When I was in grad school in Texas, my goal was to replace my high school band director when he retired. I had no intention of teaching at the college level either” agrees Haithcock. “It was never a goal.”

“Coming to the University of Michigan was a little intimidating at first,” admits Davis. “To me, the biggest adjustment from teaching high school is the amount of rehearsal time available. I was used to taking as much preparation time as I needed when I conducted high school band concerts, and here, I had to get used to putting a concert together in 9 or 10 rehearsals. It’s amazing how much breadth and depth you can still get to in that amount of time. I’ve also learned a lot about what students will and will not do outside of class time, so I’ve shifted my rehearsal focus. With the University’s tradition of excellence and the high level of professionalism among students here, I can trust the players to work on their individual parts themselves. That was tough for me at first; I never felt truly prepared for a concert. I still don’t, but I’ve changed my rehearsal methodology and am much more confident now than I used to be.”

When asked to describe the some of the distinguishing characteristics of the Michigan Bands, Davis quickly replies, “The level of students we get here, clearly, and their professionalism.”

“I get the sense that the quality of band performance here is as important as the quality of orchestral playing,” says Haithcock. “There’s a philosophy in almost all the programs at the University of Michigan, that either you’re on the cutting edge, or you’re extinct,” he explains. “That’s not just true of the bands, or the School of Music. If you look at the Schools of Social Work, Engineering, and Business- each of which is among the top five programs of their kind in the country- and right on down the line, this University is forward motion. The climate here demands that we constantly evaluate the purpose of these programs. Someone once said that the fundamental question in teaching is: Are we educating students for their future or our past? You really have to ask yourself if you’re teaching a certain way because this is how you’ve always taught it or because you know morally and fundamentally clearly that this is what the students need. I think that Revelli and Reynolds both answered that question affirmatively, although in very different ways from each other and from me. Each personality has tried to lead in a way that was best for the University of Michigan, for students in the program, and for the band world as a whole.”

Without question, the legacies of Revelli and Reynolds have left an indelible mark on the band world. However, when it comes to building a legacy of their own, Haithcock says, “This may sound trite, but I don’t worry about it. Because when you worry about it, you do things for the wrong reasons. Even if you commission pieces with an eye toward building a legacy, that lack of integrity will really undermine what you’ve done before. ” Both men agree that, in the future, they hope people will not only remember what they accomplish, but also the manner in which they conduct themselves along the way.

“What I hope most is,” says Haithcock, “whether a student is in Symphony Band for one semester or four years, they feel they’ve gotten something from the rehearsal process and not just the performances, and that it’s something they can apply to the rest of their lives. Whether they learn time management, preparation skills, or how to fully utilize their capacity to listen, or they simply gain exposure to wonderful music, then as an instructor, I’ve done my job. Time will take care of whatever legacy questions are meaningful. Day-to-day integrity is really where I want to excel.”

“I hope to maintain a student-centered focus,” says Davis. “I want to process information in a non-candored way, maintain a professional attitude, and be an inspirational leader. Even from the time I was a student, I thought that the best thing a band director could do to instruct their students is to provide each and every one of them with a constant example of preparation, inspiration, and passion, and to always emulate those kinds of ideals. I also want to program outstanding music, all the time, as an example for the larger community. Having said that, I’ve had at least 25 students admit to me that, although they didn’t want to play in a band at first, by the end of the semester they came to enjoy it. In a span of just five years’ time, that’s a big change. That doesn’t mean that it’s because of me, necessarily, but that’s a big philosophical shift that I think is wonderful for the wind band community.”

A Fine and Private Place