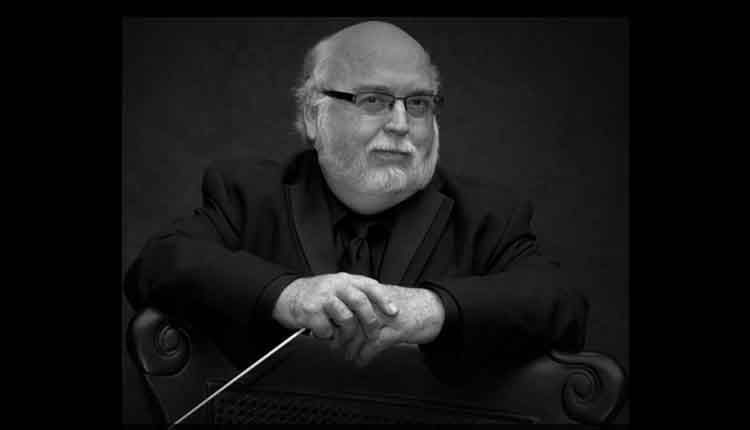 Award-winning composer David R. Holsinger serves as director of the wind ensemble at Lee University in Cleveland, Tennessee. His compositions have won two American Bandmasters Association Ostwald Awards, and he has also been a finalist in the NBA and Sudler competitions.

He was educated at Central Methodist College (Fayette, Missouri), Central Missouri State University (Warrensburg), and the University of Kansas (Lawrence). Holsinger also spends quite a bit of time as a guest composer and conductor with All-State Bands, professional bands, and university ensembles throughout the United States.

He recently shared his thoughts on the art of composing with banddirector.com.

BD: How did you get started playing in bands?
David Holsinger: I grew up in a little town in rural Missouri, and in public school, I started playing an instrument in the fourth grade. There were no orchestras in the Missouri countryside, just bands. I suppose I worked my way up from there. Playing and writing for the band is what I have known best and what I like.

BD: BD: When did you start composing?
David Holsinger: I was 19 when I started composing. I know a lot of other composers started writing at early ages and never looked back. Friends like James Barnes and Robert Smith were writing in junior high school.

What really got me interested in composing was when Vaclav Nelhybel came to guest conduct the band at Central Methodist College during a spring tour. Wingert-Jones Music Company in Kansas City paid for Nelhybel to come to Central Methodist and conduct Trittico and his Chorale. Seeing this man conducting his own music made quite an impression on me.

I recently programmed Trittico with the Wind Ensemble at Lee University [in Cleveland, Tennessee] because I wanted to pay homage to Nelhybel’s work. It’s an interesting piece, especially the second movement. I don?t think he ever wrote anything else quite like it. The movement’s uniqueness is one of the reasons it’s not played very often today, I think. Nehlybel’s music, as a whole, was badly edited by his original publisher. The markings aren’t good, and the Nehlybel-style “pushed” or flared notes are many times not indicated. Young band directors today think much of his music is boring because there’s nothing in the music to indicate the style.

BD: What effect did Nelhybel have on your compositional style?
David Holsinger: I would say that he influenced my attitude as well as my writing style. When I saw him in real life conducting music, his personal emotions were quite obvious! It was the attitude more than anything: the “in your face” personal passion. I probably have assumed some of the characteristics of his persona in my music, but mostly I admired the passion, and energy of his music.

BD: What do you think about mixing musical genres in composition?
David Holsinger: That idea applies to all composition. I once had a teacher who said a “composer’s ear is usually 20 years ahead of the listener’s”. Some people produce the same stuff over and over; hacking away, so to speak. But visionaries like Stravinsky saw music 20 years ahead of everyone else. I have mixed genres for years. I’ll use whatever I think is appropriate to paint the musical picture.

BD: What makes a band work great?
David Holsinger: I remember an article in which W. Francis McBeth talked about the difference between true masterworks and educational music for band. The band is at a bit of a disadvantage compared to the orchestra because we don?t see educational pieces for orchestra. We don’t hear orchestra people grow up, but in the band world we hear everyone squeak and squawk through clarinet lessons, etc. I think this is one reason some people think that band pieces can’t be masterworks. We have a hard time imagining that anything that started out sounding like what “beginning band” sounds like could ever possibly culminate in a “masterwork” someday!

Band music had to grow up to become what it is today. There are masterworks for band out, there is great band music out there, past, present, and future but we do tend to go for the trendy and leave behind the old.

BD: Can a piece be both educational and a masterwork?
David Holsinger: Some of the young band pieces will last because of the musical integrity in them. Bartok did OK with his young pieces. When I told the Achievement Series publisher that I wanted to have freedom to write whatever I wanted [for young bands], at first I think they were a little hesitant. But I didn’t want it to sound like everyone else’s pieces. Some of my baby band pieces have mixed meter. I have had teachers write to me and say, “My fifth grade band is playing it, and they understand what they’re doing. I taught them so much about modern music while explaining the tone clusters.” That makes me feel good. I try to write quality music no matter what the grade level.

BD: How do you get started on a new composition?
David Holsinger: I usually sketch it out at the piano with pencil and paper. Writing in a linear fashion on the computer is nice, but you have to be careful there, too. Sometimes I fix things that aren’t supposed to be fixed.

I don’t sit under a tree waiting for inspiration to strike! But there is a waiting period between pieces for me. I tend to “binge compose!” While I’m composing, I thinking, “did I write this before, did I hear this before?” I only work on one piece at a time. I try to have original things in each piece. As a younger composer I tried to make everything a little different, but now there are things that people expect to hear in a Holsinger piece. I’m too old to change. There are certain signatures that show up, but I don’t plug things in. They just happen.

When I finish a piece, I try to forget it. A director recently asked me about a piece that I wrote 27 years ago. I don’t even remember the piece anymore! I’ve got to go find the score so I can answer his questions.

BD: Do you usually have a subject in mind when you compose?
David Holsinger: The title has to be decided ahead of time. I have to have a picture to paint. My attempts at “absolute music” are just a disaster. I’m a programmatic composer. Jim Barnes has said that he is a tone poem guy, that he was born 100 years too late. I often think that had I been able to write for motion pictures, I probably would have done that. Like Jim, I tend toward programmatic music.

BD: How do you balance the demands of composing, conducting, and family life?
David Holsinger: Not well! I’m so behind in my composing because of all the conducting engagements. You just manage. Part of being a composer for me is being a conductor. It does get in the way of my composing, but I enjoy it. I never thought I’d conduct a lot, especially not traveling around the country doing that.

But I got all of the conducting gigs because my composing. I once asked Clare Grundman if he enjoyed conducting. He said that he conducted one junior high band and the experience was so nerve wracking that he never did it again. I enjoy the thrill of helping to make music come alive for the performer.

BD: What kind of repertoire do you program with your students?
David Holsinger: I direct at a small college, so we have a real mix of kids. What I try to do is a backwards and forwards type thing. The first concert of the year usually dwells on new music for band. Our second concert usually emphasizes the older works. In our upcoming (December) concert we’re playing Clifton Williams, Vaclav Nelhybel, Ralph Vaughan Williams, one of my new pieces, an Ernst Krenek 12-tone work, a circus march, and a selection by Bj, the Icelandic film star! It’s a potpourri approach to programming, I suppose.

I always program at least one of the band masterworks, such as Canzona, Chester, Lincolnshire Posy, etc. I also like to program a grade-3 piece that the music ed people can learn and have in their basket to teach in their future school teaching jobs. I feel more like a teacher-conductor than anything. If I was a head conductor at some huge school, I would perhaps get more artsy, but my students need the teaching basics. What I didn’t have, that’s what I want them to take away. I want them well informed and competent with both the baton and the repertoire. Afterall, one of these days, one of them will need to replace me!