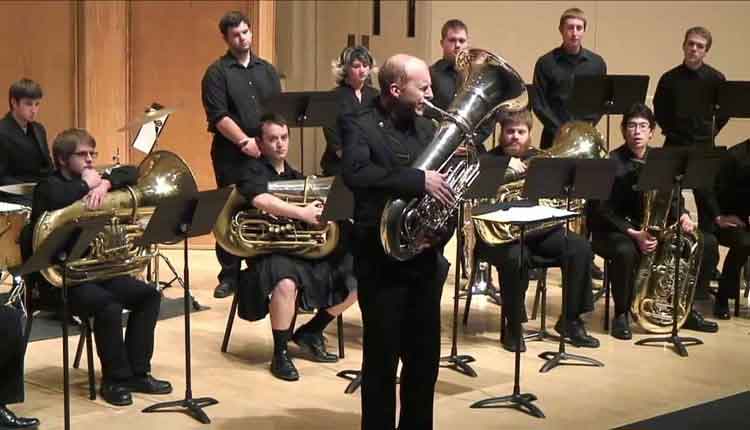 Self-contradictory? Both yes and no I would say. We are, of course, talking about the heaviest instrument in the orchestra, but please bear in mind that there is a huge difference between heavy weight and heavy playing!

Compared to a grand piano the tuba is roughly 30 times lighter. No one expects the piano to sound heavy just because its a huge instrument. So, why does tuba so often sound clumsy and big?

Unfortunately the answer has to be: The Performer. Most of today’s tubas are so well made that they only amplify whatever sound the tubist blows into them. Lets look at the facts: The valves of a tuba are now as fast as the trumpets and should enable the tubist to play as difficult passages as the trumpet player. The tuba has with its four octaves both the largest tonal as well as dynamic register. It is neither harder nor easier to play beautiful and “singing” on a tuba than on a clarinet or a cello. Despite this the tuba player is very often the least developed member of the orchestra when it comes to technical skills on his instrument. It doesn’t help that he’s probably the most developed individual when it comes to socializing!

Why is this so? Are tuba players more lazy then other musicians? Do they have a genetic fear of sixteen notes? Don’t they believe that it is possible to play anything else than ompha-ompha? No, I don’t think that there is much difference between the mind of a clarinetist and a tuba player. They are both just trying to fulfill the expectations put on them. The difference is to be found in what we expect of them. No one expects more than long notes from a tuba player, a fairly simple baseline and a bombastic base-solo every now and then. That is an exaggeration you might say, today’s modern wind band music contains plenty of challenging parts for the tuba group. Yes, you can find more funky baselines and tricky rhythms in modern scores, but what I am looking for is the use of tuba as a sensitive and expressive solo instrument in the music. I don’t say that every piece should contain a tuba solo, but if we look in the brassband library for instance, we will find more tuba melodies, sixteen-note runs, and even parts with plain tuba quartet. Here the composers use the instruments potential much more effectively, and they mostly get musical payback for that. In the wind orchestras its a vicious circle: Since no one writes advanced tuba parts, the tubists don’t have to refine technique and musicality. This means even heavier tuba playing, and very few composers dare to write musically challenging parts for tuba, since they know it will rarely sound good. Which would be bad for business…

If you drive a Porsche, you don’t drive around at 30 km/h

One can always discuss what came first: the chicken or the egg, however I believe that it for all concerned, composers, conductors, tubists, fellow musicians and the audience, a break in this circle is to be welcomed. The tuba player almost always has a bigger potential than the conductor tend to believe. Since he has relatively few notes to worry about, there should be a good chance to get these right. With the right fingering(!), dynamics, articulation, and rhythm. Actually, it should sound more accurate and sensitive than the technically harder melodic parts! The conductors should demand that tuba players handle their parts at least as well as the other instruments. Everything else is lack of respect for the musician. Of course, we tuba players must take the largest responsibility and start playing other things than orchestral parts/excerpts. If you own a Porsche, you don’t drive around in 30 km/h, do you? Its a terrible waste of time and money to sit in the back of the orchestra with the most expensive and shiny instrument and only play ompha – ompha, when there is so much else to play!

The Power of Motivation

Everyone needs the motivation to practice. On the other hand, there are a lot of different motives. I know a musician whose parents locked him up in his room until he had finished his two hours daily practicing. Personally I recommend a slightly more cheerful practicing! All successful musicians that I know have practiced a lot, and to endure that, you need rewards. Since all practicing includes many boring routines, it is important to understand that success is a result of both disciplined drilling and playing around. In the beginning it’s important to develop a positive and playful relationship to your instrument. To underline this I would like tell about one of my own early musical experiences. I was 15 years old when I started to practice regularly. I had listened to Michael Lind’s “Carnival of Venice” on a record and wanted to learn that piece. Everyone gave “good advise” and said that you must learn to crawl before you can walk. Read: play etudes and scales for a year before you even look at the Carnival. It might sound logical. How should I, that had played tuba for only a year have the slightest chance to get this super-technical piece right? For me, that had nothing to do with it. I enjoyed playing the piece, it was my tuba and my own music sheets. That’s it! Of course I wasn’t even close to playing half of the notes right, and the tempo was far to slow, but this playing with music was probably my most important energy source, then and later. My teacher had to feed me with different sorts of etudes and scales to help me master the different parts of the piece, and because of the fun I had lots of motivation to practice methodically. I strongly believe that you must deal with things in the right order: First the challenge, then the solution, not the other way around. Its not about lack of respect for your teacher. Its that the important good relationship to your instrument and your music is something very personal that other people should respect and encourage. But please, follow your conductor in the orchestra!

Have you ever tried “drumming” on your tuba? For me it started when my teacher told me to play double tonguing in the very deep register. The recipe: Play double tonguing (tuku tuku) with your lips loosely together. Use high pressure on the air, and attempt to make only one vibration (smack) of the lips per attach. No need for valves here. When you get a helicopter-like sound, you can experiment with putting accents on some of the “smacks”. Then try to exchange some of the accents with regular tones. Maybe even multiphonics. The most important thing is that the double-tong rhythm continues steadily no matter what you do. Hit the tuba lightly with your hand, ex. straight quarters, and you’ve got a complete orchestra in your tuba! Looking for unusual sound effects? Try using a baritone sax mouthpiece on the tuba. Or make the sound fuzzy with a small nail loosely in the mouthpiece. Why not wire up with guitar-effects via a microphone? Using echo, flanger, distortion or chorus certainly adds a dimension! Why not get hold of a so-called “portable studio”? Its a inexpensive multitrack recording device. It allows you to record several parts on top of each other. Recording tuba quartets, featuring yourself in all parts, is fun and extremely developing. Nothing reveals precision and intonation more efficiently. And there’s no one else to blame, or credit if it sounds great!

Don’t be afraid to “waste” time on what you like to do on the tuba. Whether you play around with Vivaldi’s violin concertos or Led Zeppelin distorted guitar riffs, it will certainly make your instrument feel more familiar. And that is the number one issue in every performing situation. The bottom line must be: If you are determined to become a better musician, make sure you play with your instrument, and not just on it. Its fun too…