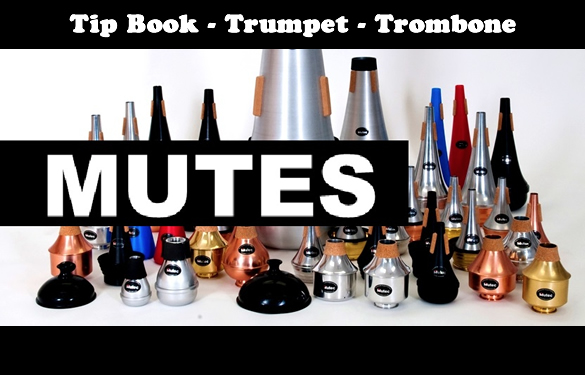 The only mutes that really mute, so that the sound is muffled almost completely, are the practice mutes discussed in Chapter 3. All other types of mutes are mainly used to create special effects, and timbres that range from razor-sharp to velvety-soft.

Most types of mutes are hollow cones in various sizes and shapes. They’re held in place in the bell by a few strips or a ring of cork. The three best-known types are the straight mute, the cup mute, and the harmon mute. The exact effect of each of these types can differ from brand to brand, of course.

The most commonly used type is the straight mute. If a classical piece specifies that you should play can sordino (with mute), you will be required to use this model. It largely closes off the bell, making your instrument sound a little like talking while holding your nose, i.e., slightly nasal and a bit thin or shrill.

The cup mute looks like a straight mute with a cup. The inside of the cup is often finished with thin, soft material that slightly muffles the sound. Some models have an adjustable cup. The closer it is to the bell, the more it mutes the sound and the ‘smaller’ the sound becomes. Some cup mutes can double as practice mutes:  See if you can move the cup right up against the bell.

The third popular type of mute comes with a host of different names, from harmon mute to wow, wow-wow or wah-wah mute, bubble mute, extending tube, or B.T. mute. It has a cork ring that closes off the bell entirely, the sound coming out of a hole in the mute only. As with the straight mute, the effect is often called ‘nasal’, but it is very different. A little more metallic, you could say.

Harmon mutes virtually always come with a small adjustable pipe that you can stick into the mute. Opening and closing this stem with your hand creates the ‘bubble’ trumpet noises often used in old slapstick movies, for example.

Most mutes are made of aluminum, producing a brighter, edgier sound than wood or fiberboard mutes. Some aluminum mutes have copper or brass bottoms that make for a more powerful or fuller sound. The sound of a plastic mute is usually somewhere between metal and wood. Plastic models are usually less expensive and more resilient than aluminum ones. You may occasionally see mutes made entirely of steel, copper, or another metal. These are typically both heavier and more expensive.

Mutes typically cost between some fifteen and fifty dollars. The most affordable ones are usually made of fiberboard or plastic; the most expensive mutes are usually special aluminum models, say with a copper bottom. Trombone mutes always cost a little more.

There are many other types of mutes. The plunger, for example, is so called simply because it looks like one. This type of mute is used for doo-wah effects. At the ‘doo’ you smother the sound by closing the bell, and at the ‘wah’ you take the mute off. Some players use hats, known as Derby mutes, instead of rubber or metal plungers.

As you would expect, a bucket mute is a small bucket that is usually attached to the bell with three small clamps. It’s filled with a soft material such as mineral (rock) wool or foam plastic, which makes for a soft, smooth tone. That’s why bucket mutes often have the word ‘velvet’ in their names. If you want a flugelhorn-like sound on a trumpet, you can do worse than try a bucket mute. This type of mute is available in various depths. The deeper it is, the more pronounced the effect will be.

There are many more types of mutes, including foldable and washable neoprene mutes that fit over your bell, or even over another mute. Lots of mutes come with very descriptive names, from the clear-tone mute, which looks like two straight mutes fitted together, to the sweet sounding mel-o-wah, the buzzing wee-zee, the penetrating megaphone, and the whispering whispa-mute, for example.

A mute not only makes your instrument sound different, it makes it play differently too. You have to work harder, your volume goes down and the pitch often goes up a little. You’ll notice this most with the lower notes. If they become sharp because of the mute, just pull your tuning slide out a little. The degree in which you need to fine-tune notes, and the increase in blowing resistance depend on the design and the material of the mute. Badly- designed mutes can make it very hard to play in tune.

A mute must fit into or around the bell of your instrument properly. If it won’t stay in place, don’t use any force but instead moisten the cork strip(s). No tap handy? Saliva will do too.

There are various types of mute holders that can hold one, two, or more mutes, or even a drink. Most mute holders are designed to clamp to the tube or the music ledge of a music stand.

Some examples of companies that make mutes are Belmonte, Tom Crown, Humes & Berg, [o-Ral, Denis Wick, Charles Davis, Harmon, Charlie Spivak, and Ullven, the latter from Sweden. Most of them also make other accessories.