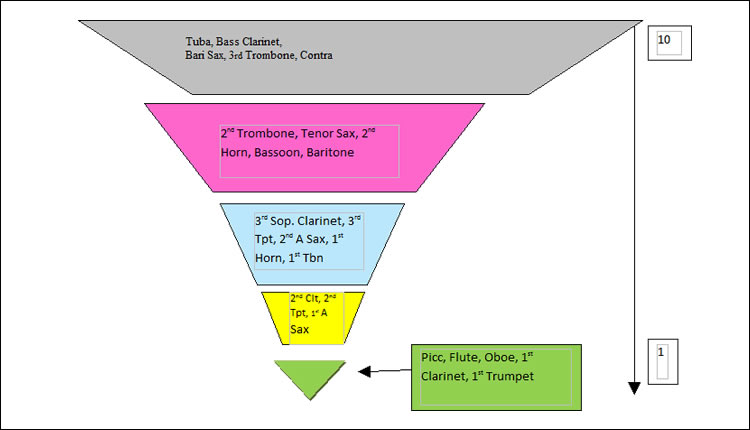 Early in my career as a band director, I learned a valuable lesson in the art of disguising intonation in my concert band. While teaching at a small school in the panhandle of Florida, I invited a veteran clinician to work for my concert band. He introduced me to the concept of the McBeth Inverted Triangle. I would later expand on the idea and use it to strengthen the overall tone quality of my concert and marching bands.

The McBeth Inverted Triangle is based on the concept of expanding on the volume of the lower pitched wind instruments, such as the tuba, contras, bari saxes, etc. and thus diminishing the upper tones demonstrated by the piccolo’s, soprano clarinets, flutes, etc. The concept is easy to remember if you simply place the various band instruments on a triangle of their pitch range from high to low.

Once this has been displayed, the students have a clearer understanding of the individual role their instrument plays in the total sound concept of the ensemble. The next process is to simply invert the triangle.

Now you have a tremendous teaching tool for balancing your ensemble. Those instruments at the top of the inverted triangle should be heavier in volume than those on the bottom. The inverted triangle provides a wonderful illustration of the balancing effect which the conductor and students should give focus. I would utilize this concept in my concert bands and notice an immediate improvement in the overall tone and quality of the band. The process of balancing the band from the bottom up was very easy in my mind; however, it would take a more simple approach to make the point to my students.

Throughout out the years, I would expand on the idea of teaching the McBeth Inverted Triangle until I perfected a novel approach which the younger generation would seem to grasp without difficulty.

I would tell my students that I wanted them to imagine they could control their band instrument volume on a scale of 1-10 with 10 being very loud. Very much like the control numbers on a volume control button on a stereo or CD player, they had the power to turn up the volume. I would then assign them a number that I wanted them to play on their instrument, i.e. Flutes would play a 2, Trumpet 4, and Tubas play an 8.

Of course, the numbers would change throughout the music which we were performing or practicing, yet they would simply mark a CD volume control number down by the particular area in the music.

I found it very easy and fast to balance the band and in turn, hide my intonation problems. The numbers would change to particular expressions in the music. Examples are given in the diagram below. 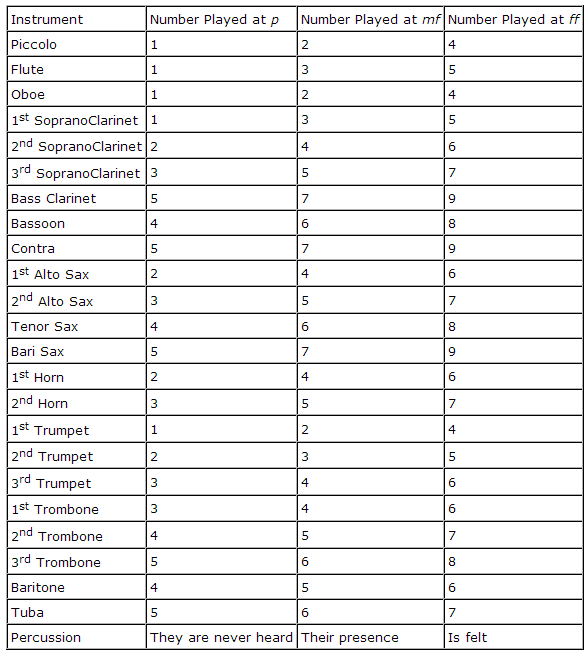 Although these are suggested numbers and can adjusted according to the particular music you are playing, they give the conductor and performer a basic idea of the personal volume control each part is responsible for each expression setting in the music.

It may be suggested that the teacher place a larger copy of this diagram on the wall for each student to be reminded throughout their practice. Understand in order to achieve the proper balance, these are personal levels of volume not section levels within the ensemble.

So the next time, you need a quick balancing act for overall intonation problems of your ensemble, remember to adjust the stereo or CD player. You will be amazed at the results.

Selecting the Best Music for a Festival

Be Creative – Get Results!