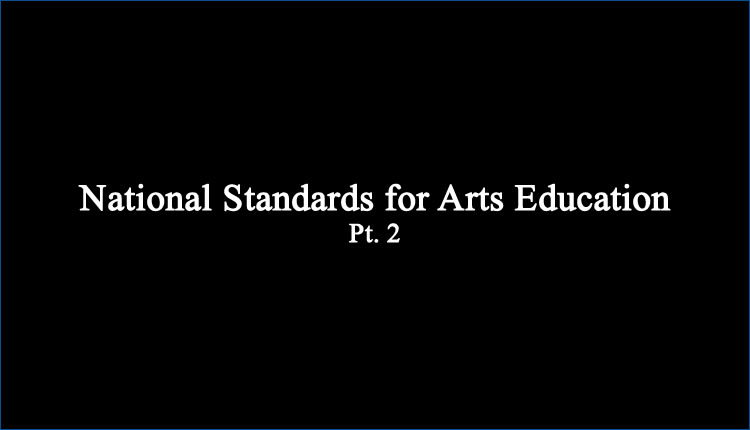 For band directors, meeting the requirements of the second National Standard- performing on instruments, alone and with others, a varied repertoire of music- seems to be a given. However, a closer look at the breakdown of required activities outlined in the Standard’s description will almost undoubtedly reveal areas where some deficiencies may still exist. The educational intent behind Standard Two extends far beyond the act of merely placing an instrument in the hands of each student, and the activities all help to create an increased understanding and heightened level of performance among student instrumentalists of all ages. Directors and ensembles alike will both benefit from revisiting this seemingly obvious part of their musical studies.

First and foremost, Standard Two states that every student should be able to “perform on at least one instrument accurately and independently, alone and in small and large ensembles”. Less obvious but equally important components of this requirement include tasks such as knowing how to properly assemble, disassemble, and care for the instrument and being able to identify and explain the purpose of its different parts (reeds, valves, mouthpieces, etc.). Students should also be able to discuss the history of their instrument as well as give examples of instruments that are either related to or predecessors of the instrument they currently play.

Other basic physical aspects of performing addressed in this standard include “good posture, good playing position, and good breath, bow, or stick control”. This means that, even if students are playing all the right notes on the instrument, if a flute player rests their arm on the back of the chair or some saxophone player slouches when they play instead of bringing the mouthpiece up to the lips, or even if a drummer has trouble controlling the speed and volume of his flams and paradiddles, the requirements of this standard are not being properly met.

It only takes a few minutes of class time to explain the importance of good posture and playing position, and ideally, matters of breath and stick control will be addressed in sectional rehearsals or technique classes, or by a private teacher. Once students know exactly what is expected of them, and that the director intends to uphold these standards in each and every rehearsal, all it usually takes is a look or a short verbal reminder to make the clarinet section sit up straight or the trumpet section play over the tops of their stands rather than into them.

All students are expected to “perform, with expression and technical accuracy” on at least one instrument, and demonstrate that they can play at a steady tempo as well as incorporate appropriate dynamics, rubato, and other expressive gestures into the pieces that they perform. Junior high students should be able to play grade 2 or 3 pieces, in solo and ensemble literature, while high school students should perform proficiently grade 4 or 5 works. The repertoire should be varied, and include works that represent diverse genres and cultures as well as pieces in different styles and from different periods in history.

Part of performing in an ensemble is knowing how to blend with other instruments, adjust intonation, and listen to the way the parts fit together, and also knowing when to bring out a line and when to hold back and let another line come to the fore. In addition to playing in a large ensemble such as a band, students need to participate in small, chamber ensembles as well, with the eventual goal of playing in a group with one person per part. The ability to play independently within an ensemble setting is a true test of a student’s grasp of both the music and their instrument.

Ideally, all students would want to perform solo literature in a studio recital or solo and ensemble contest at some time during the course of the school year to fulfill the “performing alone” part of this standard. However, this is hardly ever the case, but this can be easily remedied by making regular playing tests part of the class requirement. These tests may include scales or passages from a piece of band music, some of which should be performed from memory. The individual practice and preparation needed for successfully playing such a test is part of this Standard’s set of expectations as well. Conducting these tests with the full ensemble present, going right down the line until every student has performed, will meet the expectation of performing in front of other people, which some students may never have the chance to do otherwise.

The only other activity mentioned in this Standard is to perform, “by ear, simple melodies on a melodic instrument and accompaniments on a harmonic instrument”. Ideas on how to engage students in this activity will be addressed in Part Three of this series, which deals with improvisation. By and large, instrumental music directors will have little trouble meeting this standard. However, attending to all the details mentioned above will help transform an otherwise good band into a great ensemble.

How We Go About It