The Art Of Choosing A Saxophone Mouthpiece 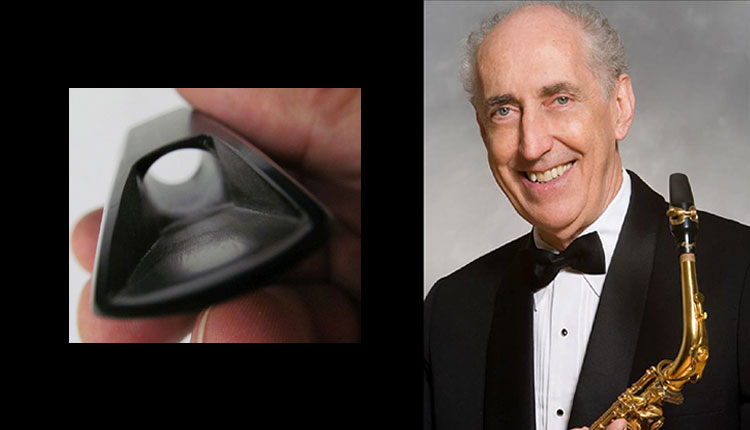 There has been a debate over the years regarding the question of materials used for manufacturing both instruments and mouthpieces. A great number of saxophonists believe that metal mouthpieces are exclusively for playing jazz, and that hard rubber mouthpieces are for playing classical performances. Actually, there are excellent mouthpieces for all genres in both materials. The great Marcel Mule for many years used a metal mouthpiece for his classical performances. It stands to reason, then, that mouthpiece design is the most influential aspect of quality, not the material.

During my studies and efforts to create a line of superior saxophone mouthpieces, I found that proper mouthpiece design is not an easy task. While in Paris in 1960-61, and in working with and studying under the eminent acoustician, Charles Houvenaghel, I became extremely interested in the design and construction of saxophones and of mouthpieces. As a faculty member at Indiana University, I made the acquaintance of Bernard Portnoy, an eminent clarinetist who encouraged me to develop the first E. Rousseau mouthpiece. As I became more interested and knowledgeable about overall saxophone design and acoustics, the development in the design and construction mouthpieces became ever so much more clear.

For example, all “classic” models of E. Rousseau mouthpieces are made from the finest quality hard rubber. During the manufacturing process for those made of rubber, a stainless steel core is used for each model. This becomes the mandrel in the exact shape of the mouthpiece’s interior dimensions. It is placed into a mold, and then surrounded with rubber. The rubber is then vulcanized and the mouthpiece is finished and faced, providing the exact contour for the two identical curves of the side rails.

The jazz alto and tenor metal models, however, are made from solid blocks of fine quality brass. Using digitally controlled computer programs, the entire manufacturing process is completed with a high degree of remarkable consistency. Once the brass mouthpiece is finished, it is then gold plated.

Response, projection, and dynamic control are important qualities of a mouthpiece design, but tone quality is certainly the most critical. It is likely the determining factor in a player’s decision of which mouthpiece to use. The opening and length of the facing, balance of the side rails, appropriate chamber size and a well-designed baffle are among the first four factors to consider. For a player to have flexibility and control in all registers and at all dynamic levels there needs to be good balance in these design features without sacrificing tone quality. Field-testing mouthpiece designs by highly qualified experts has been, and still is, the most important method of establishing guidelines for the highest quality mouthpieces. As with virtually all aspects in the manufacturing of wind instruments and mouthpieces, the final product is determined by trial and error. This is why it is an art! Maintaining a balance among all of the important qualities of a mouthpiece – tone quality, response, projection and dynamic control – requires imagination, skill, knowledge and a passion to strive for the very best results! 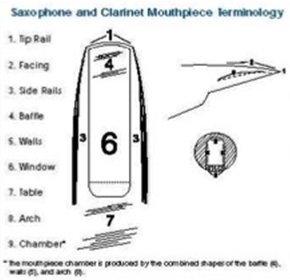 Different mouthpieces provide different results for the player, and determining which model to use will be based on many design factors. A well-designed baffle is one key factor, bringing together the best balance between each of the four main features of a mouthpiece. The tendency of a mouthpiece towards a “bright tone” (more presence of higher partials) or a “dark tone” (fewer high partials) is also considered. The use of several different reeds affects the choice of a mouthpiece since a favorite reed might work fine on one model, but not on another. The way that a performer uses his/her air is critical also. The mouthpiece characteristics are essential to achieving a good tonal response. Playing primarily classical music will encourage the player to choose a model with certain attributes that are not required when playing jazz, like the 4R, NC4 or the newer RC4 model in the E. Rousseau line. On the other hand, if a program requires a high level of volume no matter what genre is being played, a Studio Jazz or JDX model mouthpiece should provide a more desired musical response.

When choosing mouthpieces for classical and concert band application, consideration should be given to the ability of the player to both adapt to the mouthpiece now and to grow into more of the mouthpiece attributes over time. For example, the E. Rousseau Classic R Series is designed to meet the needs of the classical and concert band performer. These mouthpieces provide a warm centered tone, positive response, and powerful projection. The Classic RC Series for Alto delivers a centered, darker tone and provides for a wide dynamic range with terrific response, including a distinctively improved lower register. The New Classic NC Series features a unique chamber with specially designed baffle and side walls to provide a more controlled tone which may be preferred by some teachers for the developing saxophonist.

For jazz band section and solo jazz/pop applications, there are several jazz designs philosophies that may be chosen. E. Rousseau Studio Series mouthpieces, for example, provide excellent edge and power, but remain consistent with a traditional solid tonal center. These present good response with an even scale in all registers and are easy to play, including in the low register when playing soft (full tone) and in sub tone. These are also designed for work in the altissimo register. 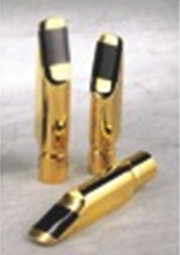 E. Rousseau JDX Mouthpieces differ in that they feature a unique wedged baffle that balances a stable sound with greater power, edge and projection. They present a good response and an even scale in all registers. The design results in a full sounding mouthpiece, with enough edge to “cut through” but enough warmth is for sensitive ballad work.

E. Rousseau Jazz Metal mouthpieces allow the player to achieve a powerful tone with an excellent balance of edge and warmth. The low baffle and angled side walls guide the air to produce a very consistent sound in all registers that almost never sounds harsh or too bright. These mouthpieces are designed to produce a clear and beautiful tone quality, and capable of tremendous volume of sound.

There are many individual differences and players will get varying results that sometimes are exceptional, such as producing excellent pianissimo passages with a mouthpiece intended for extremely loud playing, and also the reverse of this. Since there are so many models designed for specific musician demands, the saxophonist must experiment and test a variety of mouthpieces in different situations to determine his/her best course of choice.

For information about selecting mouthpieces and other saxophone instructional articles and videos, visit www.eugene-rousseau.com.

“Through the years, Eugene Rousseau has developed a rich teaching philosophy made from observation, in-depth study, advice and relevant remarks addressed to the huge community of those students who he calls “my teachers” – the countless students who in Bloomington, Minneapolis, and on five continents have benefited from his “saxophonistic” wisdom,” – Claude Delangle, Professor of Saxophone, Paris Conservatory, from the Preface of Saxophone Artistry in Performance & Pedagogy by Dr. Eugene Rousseau.