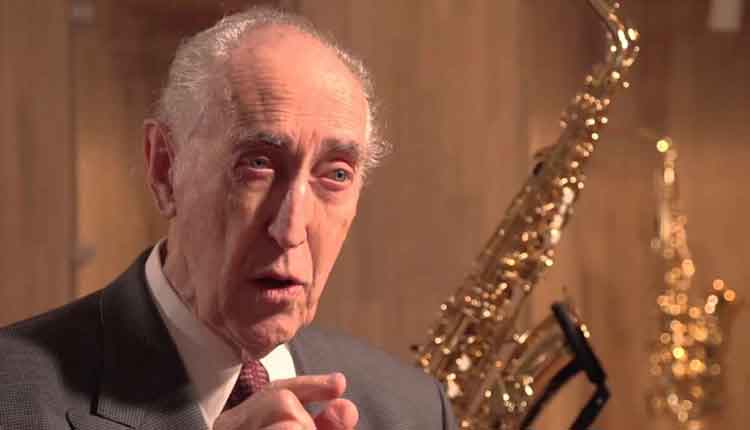 It has been nearly fifty years since Dr. Eugene Rousseau opened his saxophone studio at the Indiana University School of Music in 1964. The renowned wind faculty which included Rousseau, William Bell, Keith Brown, Philip Farkas, Leonard Sharrow, and led by Wilfred Bain, built a legacy of education that has flourished to this day. Dr. Rousseau joined the faculty of the University of Minnesota School of Music in fall 2000 and continues to instruct doctoral, masters and undergraduate saxophonists, as well ensembles including the award-winning University of Minnesota Saxophone Quartet.

Matt Muraski is the director of bands in the Cashton School District. Cashton is located in west-central Wisconsin, about 45 minutes east of La Crosse. With approximately 300 students enrolled at the high school level, 40% of whom are categorized as economically disadvantaged; Mr. Muraski teaches 32 in the high school band, along with 57 in the middle school band (evidence of a longer term growth plan having impact), along with smaller groups including a saxophone quintet.

Yet these two educators have a great deal more in common. Matt Muraski plays saxophone, and studied with Dr. David Milne at UW-River Falls, a student of Dr. Rousseau’s. “I was always excited when he told stories of Dr. Rousseau’s philosophies of the saxophone and playing. I have many techniques, fingerings, and interpretations handed down that I’ve passed on to my own students.

“We sometimes forget that our fine college and professional players have to get their start somewhere,” said Matt. “When I started at Cashton, the band program was rough around the edges. Students weren’t invested and most of them just played on whatever. Over the past couple of years, I’ve cultivated some good players and wanted to provide them a step in the direction of a more characteristic sound.”

ER: “Developing a good saxophone section – whether in concert band or big band, requires a good tone, which is the most vital part of playing the saxophone. The tone is created by the air column, which is controlled and refined by (1) the amount of air used and (2) the formation of the embouchure during this use. The fact that wind instruments use air is obvious, but we sometimes forget that the air column of each instrument differs in size and shape, as well as in quantity. For saxophones, the amount of air differs throughout its range; and from one saxophone to another (SATB).

Players can improve their tone by inhaling quickly and deeply through the corners of their mouths. This will keep the basic embouchure position intact so that the player can resume a good tone immediately after inhaling.

To determine the correct balance between air and embouchure, a simple test is to play a note using only the mouthpiece. The goal is to achieve the following pitches:

MM: “In my saxophone section, I have 6 alto players currently who all play Class A level solo/ensemble music, 4 of whom went to state last year. Most students either play on second hand instruments found in Cashton, rent from a store, or borrow from the school if they can’t afford either. In most cases, having them purchase a new or upgraded instrument is very difficult, especially in the earlier grades.

ER: In these types of situations, it’s important understand that not all saxophones makes and models respond in exactly the same way. At times, we might blame the player when, in reality, this complex instrument can fail mechanically in many small ways that affect performance. As well, some instruments may have flawed or obsolete designs which make blending more difficult. Beyond the instrument itself, having a section that performs on similar makes and models of mouthpieces can have a great effect on the overall sound.

Of course, young players can have their own challenges, as well. If private lessons are not available, occasional clinics by a qualified saxophone instructor will help to at least avoid bad habits from spreading throughout the section!

MM: When I began student teaching I started thinking for the first time about the real scenarios that band directors face. Let me first say that I am a very big fan of Dr. Rousseau’s playing and teaching. I understand the importance of having high quality equipment, yet I was faced with the challenge of both the school and the students not being able to afford making these investments. As a saxophonist, I thought that I myself better play on something that I could recommend to students with a snowball’s chance that they might be able to afford.

It helped that Dr. Rousseau’s mouthpiece recommendations were at a professional level AND were affordable. Regardless of price, the equipment must perform well!

ER: The areas of the mouthpiece critical to influencing tone quality are the opening and length of the facing, balanced side rails, a chamber of appropriate size, and a well-designed baffle. There needs to be a good balance in these design features so that the tone quality is desirable, yet allows the player to have flexibility and control in all registers, and at all dynamic levels.My main concern has always been to find what I believe to be the best balance among: tone quality, response, projection, dynamic control.

MM: Over the past two years, two students actually bought upgraded mouthpieces. After this I used some of my leftover repair budget (from doing most repairs myself) to purchase three more. Having all players on the same mouthpiece design really helped to bring the section together. Before, tuning and intonation were just so-so. The scale of the instruments – and of the section – is now more in tune. The second greatest improvement was in the section’s cohesiveness of sound. The models we use, along with a combination of specific instruction and practice, provide for a very characteristic and improved saxophone sound.

ER: In testing a mouthpiece, I recommend four factors to consider: (I) Use several reeds of slightly different strengths. Your favorite reed may be fine for your current mouthpiece,but not for a different one. (2) Be certain that the reed is placed correctly on themouthpiece, that its tip is even with the tip of the mouthpiece, and that it is centered from side to side. (3) Be certain that the reed is sealing. To test this, keep the end of themouthpiece covered with one hand, draw the air out of the mouthpiece (keeping the end covered), then take the mouthpiece from your mouth. A popping sound ensures that thereed is sealing. (4) Before playing anything, use a tuning note so that the mouthpiececan be at the correct position on the bocal (neck). If not, distortion can occur.

Whether one can or cannot upgrade an instrument, upgrading the mouthpiece will enhance performance. Upgrading an entire section’s mouthpieces can also provide excellent results, especially if the mouthpieces are of similar make and design. The mouthpiece design transforms the player’s air into sonic speed and, together with the reed vibration generates the key elements of good tone.

Many student players take the time to tune to one note — which is fine for a start. But, it is necessary to relate to different notes when working with a saxophone section

In tuning the saxophone AND a saxophone section it is best to start with two notes: 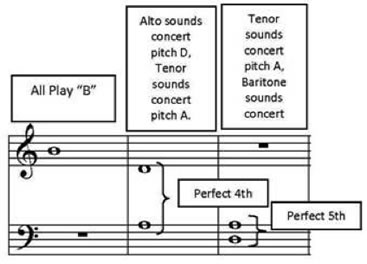 “Through the years, Eugene Rousseau has developed a rich teaching philosophy made from observation, in-depth study, advice and relevant remarks addressed to the huge community of those students who he calls “my teachers” –the countless students who in Bloomington, Minneapolis, and on five continents have benefited from his “saxophonistic” wisdom,’ – Claude Delangle, Professor of Saxophone, Paris Conservatory, from the Preface of Saxophone Artistry in Performance & Pedagogy by Eugene Rousseau.

For more information about Dr. Rousseau and a wide range of advice and discussions concerning saxophone performance and mouthpieces, visit www.eugene-rousseau.com.