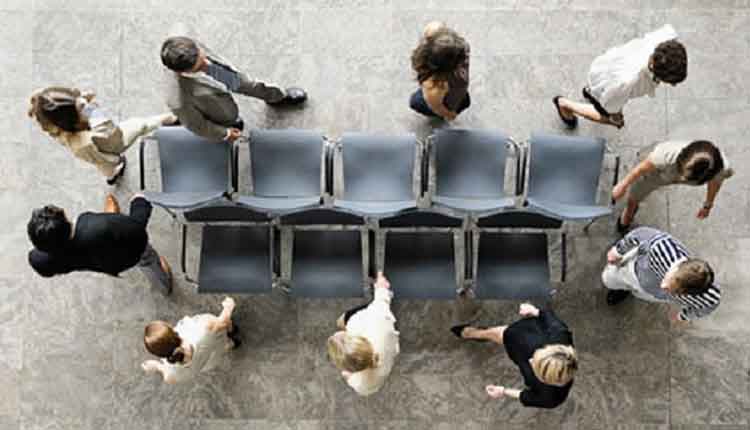 To presume that one seating arrangement is ideal for the presentation of every piece is like believing that all the art in an art gallery looks just as good under the same lighting. Like visual art, music consists of a variety of colors, textures, and moods, all of which can be supported or obscured by the layout of the performers. Should the seating arrangement of a band be determined by what is best for the conductor, what is most helpful to the instrumentalists, or what presents the clearest aural picture of the music to the audience? Ideally, the stage setup should fulfill all these conditions, and, if not, the priority must lie with the objective of the performance.

It is certainly true that on a concert stage, the instruments with less penetrating power should be positioned so that the audience can hear them at all times. But, as you know, being heard is just the first step to being musically expressive. There must be a consideration beyond the volume potential of an instrument, beyond simply its degree of presence in a sound canvas. The type of sound that you are striving for should be supported as much as possible by the placement of your players. For example, if you are performing a work in which a warm, round, mellow sound from a featured French horn section is vital to the realization of your concept of the music (Holiday for Horns comes to mind), having them be audible is just the beginning. Even if your horn section feels comfortable playing in tune and in tempo at extremely loud dynamics from the rear of the ensemble, the issue of importance is whether they obtain the required type of sound and not just adequate presence. A quick fix is usually to have everyone else play soft enough so that the appropriate instruments can focus on timbre rather than volume. This may be necessary if the instrumentation of your ensemble is unbalanced, or the piece is inappropriately scored. However, this practice can often lead to the accompanying players playing so softly that they feel powerless to contribute in any meaningful way to the musical phrase and become submissive in their performance. Rearranging the positions of key performers for such a work (or an entire concert) can expedite the realization of your musical ideas by giving you more timbral flexibility with important voices while providing others with a wider margin in which they can continue to be imaginative and spontaneous.

There are, of course, logistical issues which arise when one unshackles the musicians. When rearrangements are done mid-concert the most obvious concern usually has to do with having enough space for the players to maneuver quickly and orderly and maintaining a flow to the concert. Many collegiate wind ensembles regularly change their setup with the varying instrumentation of each piece. These ensembles are usually small and can therefore do this quickly and comfortably. Depending on how many people are being moved, this may be a little more challenging but should still be manageable under all but the most extreme conditions (outdoor band shells and gazebos can be notoriously small). The key to expediting a seating shift is simply having each person know where to go, when to go and how to get there. Rehearse it once or twice and most students above the middle school level do fine. For a performance of Bach’s Contrapunctus XII (a four-part fugue), I had almost an entire high school band (all but the tuba players and percussionists) get up and switch seats between selections on a program. These thirty-five individuals did this in an unhurried manner in only forty seconds and were seated and ready to play before I could finish introducing the piece to the audience. If there is also the need to move chairs and stands, having everyone stand aside while two or three pre-assigned people function as stage crew will keep things clear and safe. Addressing your audience during this time is more than appropriate if you are worried about losing their attention. The hardship of moving a group of musicians across a stage is often overstated; just look how fast they move when the rehearsal is over.

Many conductors feel lost when the instruments they expect to be in a certain place are somewhere else. This is something which people who regularly guest conduct learn to overcome quickly. Unless you’re conducting a marching band, the musicians seated before you are not going to move about during the piece. Like everything else, being flexible and being able to quickly reorient oneself takes practice. It will only strengthen your visual and, by extension, aural awareness and in so doing increase your confidence as a conductor. Of course, the more intimately you know the music, the freer you will be to visually engage the musicians of the present instead of cueing the ghosts of yesterday’s band.

Splitting and Doubling Down

Many pieces scored for concert band contain practical yet often unimaginative orchestration. The same doublings, tripling and quadrupling of lines appear so often from piece to piece that most musicians intuitively understand the connotation when someone says that a piece sounds “band-y.” Rather than re-orchestrating these particular pieces, why not try repositioning your players to give them a new perspectives on music and the relationships it creates between them and the other instrumentalists in the ensemble. Seating the euphoniums alongside the tubas makes perfect sense when they are predominantly doubling the bass line. However, if their function in a particular group of pieces is to provide the countermelody in unison or octaves with the tenor saxophone, alto clarinet and bassoon, then it would certainly be very advantageous to have these players seated together for a few rehearsals if not for the concert itself.

Young instrumentalists are often focused on the execution of their individual parts and can possess little awareness of those who may be playing the same line. When the conductor makes a player aware of the doubling verbally, it is easy for this awareness to be utilized in nothing more than rhythmic synchronization or volume attenuation. Corralling these players together will not only make them immediately and constantly aware of their relationship but reinforces the sense of “team” and purpose that it necessitates. This more intimate placement of the players of the same musical line will facilitate their communication on both technical and emotional levels, paving the way for more productive rehearsals and clearer and more imaginative performances. Just because certain instruments are technically part of the same family (i.e., clarinet, alto clarinet, bass clarinet), it does not mean that their harmonic and contrapuntal roles are just as strongly related. It is important that your performers are always mindful of this.

Show Me The Music

It’s long been known that people hear with their eyes as well as their ears. Visual cues to an audience (and performers) will aid in their comprehension and appreciation of the music which can lead to deeper feelings about it. A seating arrangement that visually illuminates aspects of a piece’s structure can be essential in establishing aural clarity and a deeper musical affect in a listener. In an interview for Dr. Frederick Harris?s book, Conducting with Feeling, Stephen Massey of Foxboro, Massachusetts states this concept aptly: “Anything that we can do to change the way in which people hear…it also changes the way in which people feel, because they feel differently when they hear differently.” The more elements of a composer’s artistic expression an audience perceives, the more engaged and inspired they will be. As long as the musical affect is the motivating factor, there is no shame in rearranging your seating layout if it helps them to that end.

In an wind band transcription of J.S. Bach’s The Art of Fugue, I was able to create a situation which offers the opportunity for totally unorthodox seating arrangements while maintaining optimal conditions for conductor, performers and the audience. As Bach’s last great collective work, The Art of Fugue represents a monumental achievement in the exploration of the principles of counterpoint. The collection consists of fourteen fugues (called Contrapunctus) and four canons. Since all of the fugues, with the exception of Contrapunctus VIII & XIII, are four-voice fugues, I decided to divide the band into four groups (plus 3 percussionists) to represent the four voices: soprano, alto, tenor and bass. In order to give myself the greatest timbral palette while maintaining consistency through all the fugues, the assignments were made as follows:

These groupings represent the basis for most of the the doublings used in the transcription. They are also reflected in the visual layout of the score(s) and, which has the benefit of instantly showing the conductor the predominant structure of the orchestration, which instruments share the same voice. If, as I suggest in the performance notes, the seating arrangement of the players also reflects this structure, cues and other visual communication with all the players of one particular contrapuntal line become much easier (There are some key moments where the instruments of the same contrapuntal voice split into counterpoint).

In a conventional band seating arrangement there would certainly be some joy from a player, say a clarinetist, who is seated within the clarinet section and listening to the interplay of counterpoint occurring within that instrumental family. Unfortunately, it would be easy for the individual player to lose sight of the stronger relationship they have with those doubling their line. Furthermore, being placed in the middle of a contrapuntal whirlwind could make it even more difficult for them to consummate that relationship. With the musicians seated next to players of the same line, they will be better able to hear and see each other and, therefore, be in a better position to match timbre, articulation, intonation and all the little nuances that give a particular line character. The sense of interplay between the various lines, however, is not lost. The strong visual image of “choirs” of musicians coupled with an enhanced quadraphonic clarity will reinforce the existence of the various contexts in which they must function.

The anticipation created while the musicians position themselves in a peculiar setup will focus and intensify the audience’s attention. This gives way for more attentive and concentrated listening. Even though The Art of Fugue is not antiphonal music, arranging some physical separation between the groups will allow the audience to more easily see, hear, appreciate and enjoy the contrapuntal genius of Johann Sebastian Bach.

Breaking with the tradition of having all like instruments seated together is more difficult psychologically for a conductor than it is physically. We must never assume that our regular ensemble setup is the best way to present every piece of music, nor should we let convenience and personal comfort influence our imagination and govern our decisions. When the opportunity to more completely and uniquely realize something as abstract as music arises we should make every effort to do so. Once a score is studied, our imagination should not be limited to the production of sound from one predetermined perspective. As long as the compositional elements of the music are the guiding authority in any decisions, there will always be growth and value to our exploration. An ensemble of musicians is not a prefabricated boombox or music box with fixed dimensions and acoustic properties. We can make them more by thinking outside of the box.