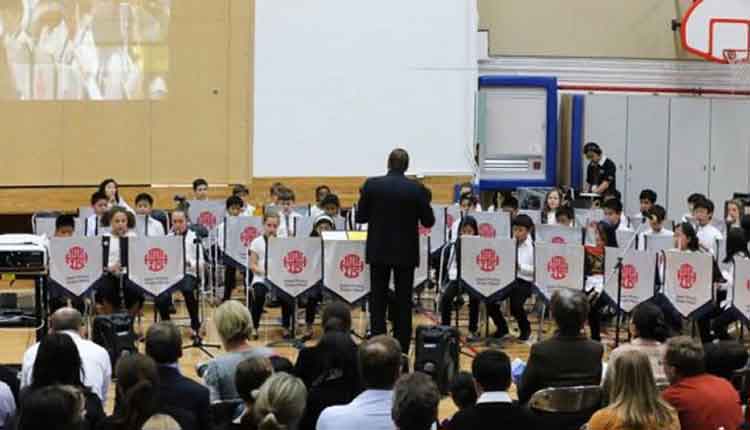 Does the thought of a beginning band concert conjure up aural images of colliding asteroids or a visit to the sound effects studio for Jurassic Park? Do you find yourself mourning the loss, the perceived besmirching, or possibly the compromising of great musical themes and favorite national airs, subjected to unrecognizable renditions by beginning bands?

Granted, unhappy outcomes can always occur, but there are strategies for making those first concerts less traumatic and less likely to alter or destroy your sense of humor and emotional equilibrium.

When you pick music for the first concert, use the best-sounding five or six melodies your students have been playing in their beginning band method. Parents typically don’t care if their fledgling band students are playing “London Bridge in Quarter Notes” instead of the “Too Difficult for This Band March,” as long as it sounds good and the students feel positive about the result. Make your number one criterion selecting whatever the band can play that sounds good, period. Whether they play three, five, eight, or more pieces, just be sure to pick the ones your group can play well. Since simple melodies from the book are short, have the kids write in repeats and play all of them at least twice through. If the band can handle it, have your students change dynamic levels each time they repeat a line or, when appropriate, add other repeats to feature your strongest sections by letting them play alone. You can get lots of mileage out of fewer tunes and the kids will gain confidence playing familiar material.

Finalize most of your music choices at least three weeks before the concert, and then polish them. Each time yu play one of the concert melodies in rehearsal; reinforce good playing by asking for “perfect posture, perfect instrument position, perfect breathing, and great sound.” Remind percussionists about correct posture, stick grips, and techniques like where to strike the bass drum or how to play the cymbals. Teach students how you want them to bring their instrument to playing position for each selection, and then drill it until they’re consistent and comfortable with your method. Practice full, precise attacks for the beginnings of all tunes on the concert, then work on all the releases. For example, to execute whole notes have them practice saying 1-2-3-4-release, and then ask them to play a whole note and do the same. Stress holding all notes out all notes in the concert selections to full value, particularly those that end the pieces. Emphasize producing only good sounds and stop as often as needed to correct any awkward squawks, blats, or overplayed percussion sounds.

Make a chart to insure that your percussion players are rotating through whatever instruments you’re using. Except in unusual cases, don’t let a young percussionist play bass drum for the whole concert. If you don’t have enough percussion instruments, add accessory parts on tambourine, triangle, woodblock, or whatever you have available, so every student gets to play on every piece. If you have someone who’s a bit erratic keeping the beat, make sure he or she is always teamed with one of your strongest drummers. Your best prepared piece can easily go up in flames if your unsteady drummer wanders off into rhythmic never-never-land during the concert.

For the final week or two, spend some time in class tuning instruments. If your beginners are very young, keep it brief by hearing only one or two sections each rehearsal. When you learn where your chronic problem spots are, work those more frequently. If you stress good posture, instrument position, and breathing, many or the intonation problems you might have had will improve or disappear. Be aware of mechanical problems like leaky pads or missing water key corks that can prevent good intonation until they’re repaired. It’s also wise to be cognizant of which students are tying to play instruments that are lower priced, worn out, poorly maintained, cheap imports, or, in worst cases, combinations of these factors. Sadly, some beginner’s instruments are so hard to play that nobody, short of professionals or The Archangels, both needing divine assistance, could play them successfully.

There are two things you can teach that will help make any young group sound better. First, have students practice looking up frequently to make sure they’re playing on the beat. After you’ve rehearsed each concert tune, ask how many students were able to look up as they played the piece. You’ll already know the answer because you could see their eyes if they were watching you. You can also instruct them to raise their stands to a height where thy can glance up from their music and see you easily. Contrast this practice with that of the crumpled over young player whose stand is as low as it will go and his or her trumpet is resting on one knee and aimed at the floor. Probably the only way this approach is going to work is for the student to have an eye located in some unusual place or for you to have little colored laser light pointers installed in your shoes. Because young players have a tendency to focus entirely on themselves and their own music, we also need to stress the importance of them listening to each other. Each time the band struggles to stay together, ask them what are the two things that will help most to solve the problem. Soon, they’ll be reciting for you, “look up, and listen to everyone else.” If you have one section overpowering the rest of the band, remind them about listening and keep reiterating your instruction anytime the ensemble falls apart.

After you’ve taught students to play the notes and rhythms with good playing habits, build the confidence needed for them to execute those things when there’s an audience present.

Do enough repetitions that first concert excitement or jitters won’t throw your band off stride. “Rolling Along” may be old to you, but, if they’re sounding good, it will be satisfying to your students every time they play it. Each time you repeat a piece, have some improvement in mind, like, “Let’s see if every single person can look up so we can stay together this time.”

If some sections, especially French horns and low brasses, are having trouble locating pitches when they attempt first attacks, let your woodwinds play the pitches first, then have everyone attack together. You can also have the brasses practice humming the pitch given by the woodwinds before they attack. The preparatory note can usually be dropped before the concert but if you need it to help make the brasses successful, keep it.

When the brasses’ accuracy improves, acknowledge their success. “That’s exactly right,” or “You were right on target,” will help build the confidence they’ll need to accurately attack notes in the future.

As your concert date nears, if you find that most students are handling the selections well but a few are struggling, make sure some pieces on the program are easy enough that everyone can play them. In special cases, you may want to write out a part that “only certain people get to play,” which includes some strong sounding whole notes “that will help everyone else sound better because they give us the harmony we need.”

When you’ve identified your exceptionally strong individuals or sections, give them solo or soli recognition, either by playing special pieces or by letting them play by themselves on repeats added to your other selections.

If the opportunity is present, involve a school administrator or locally significant individual to introduce the band or speak in some manner.

Make the Concert a Big Deal

At this point in their lives, students’ fist band concert is a significant event and it’s up to us as teachers to make sure the event is as important to us as it is to them. Few things are likely to com through more clearly to students than the overt or subconscious thought, “It’s only a beginning band concert.”
Make sure each student’s name is printed in the program. Prepare the program names a week in advance and pass them around to be sure all names are included and that they’re spelled correctly.

Publicize the concert in whatever ways are appropriate. Announcements over the school’s intercom and in the newsletter are good starts. A couple of weeks ahead, put the pertinent information – time, date, place, etc. -on the chalk board and let students exercise their imaginations in poster making. Have a contest to see who makes the most colorful, creative poster and see that all of them are posted around the school.

You may want to design or let students create invitations to the concert, then print them and let band members give them to favorite past or current teachers, friends, grandparents, other relatives, and so on. You may also want to print “Honored Guest” badges or ribbons and let students who invited special guests pin the badges on when visitors arrive at the concert. In our concerts at school, we’ve had good success placing a row of chairs for special guests in front of the first row of bleachers.

Carefully plan performance details. Discuss with your band what they’ll wear, whether it’s the school shirt or white tops and black bottoms, to insure a uniform, sharp appearance. Practice having students acknowledge applause, typically by having them stand as a group after their final selection. Look for opportunities during the program to recognize sections, possibly by having one group stand after individual selections.

Make an audio or video recording, or both, to play back at the first class session after the concert. Point out everything that looked and sounded the way you planned and praise the positives. “That’s something we can do better on next time,” is a good way to handle things that don’t go well. Encourage friends and relatives to bring still or video cameras to record the concert and ask for copies to be used in class.

Things you can do to make your first beginning band concert of the year more impressive and satisfying for everyone involved include: