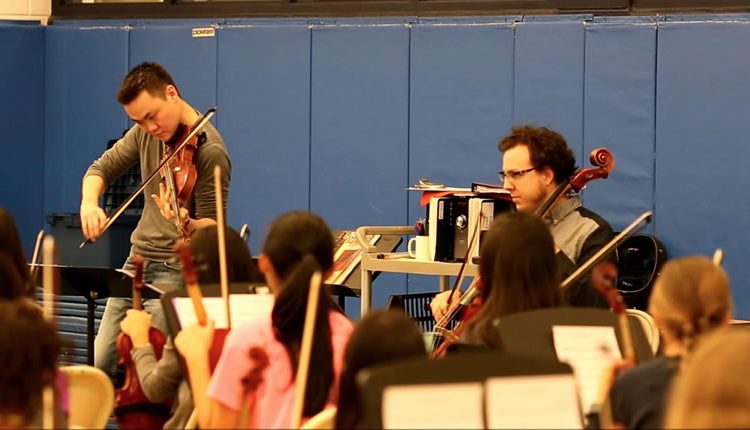 When college music education students imagine their “dream” orchestra jobs, it’s likely that nine out of ten hear symphonies, concerti and chamber music echoing in their minds. It could surprise these dreamers to know that they will also be conducting boleros, rancheras, folk music and “cabin” songs.

Of course, the center of any successful string program is the traditional orchestra. It takes a keen understanding of the societal and cultural demands of the community, as well as committed teachers and administrators, to bring the orchestral string program into the mainstream of school consciousness. It also helps to have something a little different to gain the recognition that would otherwise go lacking.

Before adding that “something different,” it’s important to have the core program solidly in place. The first step is to show the administration that the kids are interested. “Often people say, ‘We already have a band, already have opportunities for the kids,” says Pamela Tellejohn Hayes, a music educator and co-author of the method book series Essential Elements 2000 for Strings. “Why do we need an orchestra?” You have to prove the kids want to play a string instrument. Then you need to show that these kids can learn to play these instruments and that there are advantages in playing these instruments, such as when they go to apply at colleges.”

Timing is important when recruiting string players. Some school systems start in fifth grade, others in sixth; generally, it’s whenever the middle school programs kick in. “I have the sense that a lot of string players start because they enjoy that string sound,” says Karen Braden, the Orchestra Director at Concord High School in Elkhart, Indiana. “Practicing is still hard when they’e young, but the work you do with beginners, developing that foundation, is important.”

Starting in middle school usually means you get students who are more committed to continuing with their music studies for many years to come. You also get a chance to work with them every day, which can make a big difference, especially with strings. “There’s a risk starting in elementary school with string instruments,” says Terry Shade, the Project Facilitator for Orchestra for the Clark County schools in Las Vegas, Nevada. “When they start at that point, it’s not as cohesive and they change their minds. Let’s say they start in the third or fourth grade. What are they chances they’ll continue all the way through to twelfth? It’s an awfully long time.”

Having teachers who are dedicated to recruiting and following through with string students is another key for a strong program. Shade spends much of her time working with the teachers in Clark County, which is the sixth-largest school district in the country. Educators are more likely to stick with the program if they feel they’re getting the support they need.
“I mentor the teachers, especially the new ones,” Shade explains. “So often they get difficult assignments, start to feel isolated and end up quitting the profession. I’m there to offer information or advice or anything they need.”

That kind of mentoring can be helpful, because it’s still often teachers who have to carry the fight for financing and prove a program’s worth to the community. “String teachers by nature are used to having to fend for themselves,” Tellejohn Hayes says. “Many times there are minimum resources and you have to demonstrate the need before a district will put money into a program. If you can make the case, the money will come, whether from the school district, by fundraising or through private sources. You just have to find ways to get what you need.”

An excellent way to make the case is by adding cultural and societal elements to your program that are a “good fit” for your community. These kinds of features can be enormously helpful when it comes to getting broad-based support, raising funds and recruiting kids. In addition, they can be truly enjoyable for all involved.

Tellejohn Hayes started her Strolling Strings program to get more involved in the community. “I wanted to reach people who wouldn’t normally come to our concerts,” she explains. “Usually it’s just parents and their friends who attend. I also wanted to get the kids involved in a different type of atmosphere.”

There were about 45 kids in the Strolling Strings at any one time, but Tellejohn Hayes never used all of them at once. It depended on the size of the event, but they did play for crowds that reached 400 to 500 people. “We played for the Chamber of Commerce convention and the Teacher of the Year banquet. It was mostly within the community or the state, but sometimes we would get calls from out-of-state people who had heard the kids and wanted them to play at their event.

“Eventually, we ended up with more calls than we could accommodate. I wanted to maintain the integrity of the classical program I had; this was a side thing and not the bulk of the program, and class time was spent on the other works we were performing.”

That’s why the Strolling Strings students would memorize their program in the fall — basically light pop music — and then brush up on it before going out to perform during the rest of the year. Most of the events were very casual – basically a dinner where the kids would stroll around to the tables.

“At first the kids weren’t sure about doing it,” Tellejohn Hayes says. “But when the audience started giving them immediate feedback, they loved it. Instead of me telling them they did well, they were hearing it directly.”

They weren’t the only ones hearing the positive words. Over time the school board and administration received comments from a variety of people, not just the parents of kids in the program. As a result, they made sure the program continued to be funded, which helped it become an essential part of the curriculum.

Another program that’s had a positive effect on the community offers mariachi classes to students in Clark County. Terry Shade’s colleague Javier Trujillo is the Project Facilitator for Mariachi in the district, and he has seen the mariachi classes comprise over 1,000 students in only two years.

“We do fun music that the kids can enjoy,” Trujillo says. “It’s popular Mexican music, and they love it. Parents and administrators can see it on their faces.”

The kids’ passion for the music can be found in the three-day mariachi festival that took place over the summer in Las Vegas. “We had more than 300 of our students,” Trujillo says, “plus others from California and Arizona. There were two days of workshops with world-renowned clinicians, and then we had a concert where the students performed in front of 3,000 people. All proceeds from the concert went to the mariachi program.”

Las Vegas benefited in another way when the program was introduced into the school system. “It has been instituted at the lowest socio-economic areas of the city,” Trujillo explains. “We felt this would be a great way to encourage students to stay in school. The kids know that if they keep their grades up and complete the class, they will have an opportunity to perform, be team players and become ambassadors for the school in mariachi music.”

Johanna Pollack, the orchestra teacher for Lexington, South Carolina, School District 1, uses a similar approach with her students. She, too, works with a mariachi group, and has further tapped into the multicultural roots of her region with a fiddle club and a Celtic group as well. All of them are popular, and they have had a huge effect on the number of kids signing up for orchestra.

“Some of the kids are not really interested in classical music,” Pollack explains, “but they join the orchestra, practice and get the grade they need so they can participate in the groups. When I started about 15 years ago at the high school, there were 23 kids left in the orchestra because the rest weren’t interested or didn’t want to work. Now we have 123, and now I have this little carrot, and the little kids get attached to the bigger kids and we have a lot of synergy.”

The fiddle club plays bluegrass and some Texas swing. “We have 24 students this year,” Pollack says, “two guitarists, and the rest divided up among fiddle, violas and cellos, plus double bass. I’ll have the kids recruit percussionists from the band to play washboard, cowbell and gutbucket. We also use jugs, and the kids dress up in jeans and red-flannel or checked shirts; many of the girls wear pigtails and some kids black out their teeth. When they come out people kind of go ‘Oh my goodness!’ but then they see they can play.”

Pollack gives the students a lot of leeway as far as picking the music they play, although she admits that “once in a while they go too far and I have to drag them back in.” But she feels the independence helps them grow, as do the responsibilities the older kids have in working with the younger ones each year.

“They teach them the music,” she says, “and that improv is not scary and you don’t have to have a piece of music in front of you. It teaches them leadership skills.”

That’s just one of the many benefits to be gained by adding groups like these to a strings program, but teachers must be willing to try something outside the box. As Pamela Tellejohn Hayes puts it, “We are such trained people as classical musicians that we tend to want to stick within that box. Some people feel that if you don’t teach your kids the literature, then you’re cheating them a little bit. The important thing is that there be a clear balance. Don’t let one take over the other, but it’s really important to have some kind of group that goes out into the community.”

The Buzzard by Warburton