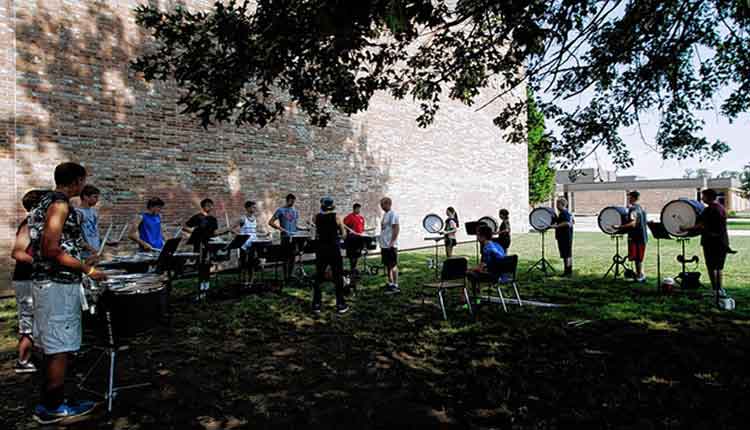 Summer band camps and marching clinics have become a mandatory part of most high school band curriculums, and benefit students in these programs in many ways. Not only does the band get a head start on learning half-time and competition shows, incoming freshmen have the chance to acclimate to the rigors of the marching band before classes begin and every student benefits from the physical conditioning regimen many directors incorporate into these camps, which gets them in shape for the sometimes strenuous physical demands of long parades and complex marching shows. However, these outdoor rehearsals in the sweltering August heat pose the same risks and health threats as summer sports practices. Directors should be able to recognize the signs and symptoms of heat-related illnesses, learn how to prevent them, and arm themselves with information on how to help students who may fall prey to extreme heat and humidity.

Dehydration is perhaps the most common problem among those who participate in prolonged physical activity in the extreme heat of late summer. The body loses large amounts of fluid through perspiration, drastically more so when the temperature is above 80 degrees and humidity is high. If these fluids are not replenished at the first sign of dehydration, the body loses its ability to release extra heat through perspiration. Without this self-cooling mechanism, the body temperature can become dangerously high, and if there is not enough fluid in the body to maintain kidney function, dehydration can be fatal, even in young people.

The simplest way to prevent dehydration is to drink plenty of water (and maybe even a sports drink) before any physical activity and to replenish these fluids often during and after any workout. Surprisingly enough, thirst is rarely a symptom of true dehydration. In fact, the lack of thirst often experienced by dehydrated individuals is especially problematic because this is often when their body needs fluids the most. Directors should instead watch for a sudden decrease in energy and performance levels, and take any complaints of headaches, dizziness, or body aches seriously.

Dehydration may also be a symptom of other heat-related illnesses, some of which are especially severe. Heat cramps are forceful, painful muscle contractions, which are believed to be caused by dehydration and poor conditioning rather than a lack of salt or other mineral imbalances. Because these types of cramps usually strike the hamstrings or the muscles at the back of the calves, those who participate in summer sports or any other outdoor physical activities are particularly susceptible. To relieve heat cramps, move the affected student to a shaded area or other cool environment, give them plenty of water, and let them rest. Proper stretching and frequent water breaks may help to prevent heat cramps, or at least alleviate the potential severity of the cramps.

The main symptom of heat exhaustion is, as the name implies, exhaustion, but it is also a result of excessive heat and dehydration. Signs of heat exhaustion may include paleness, dizziness, nausea, vomiting, fainting, and a moderately increased temperature of 101-102 degrees. In this case, because the elevated body temperature is caused by the heat, it’s not truly a fever. Rest and water may be enough to cure mild heat exhaustion; the use of ice packs and fans may also help. In more severe cases, patients may need IV fluids, especially if vomiting prevents them from drinking enough water.

Heat stroke, also known as sun stroke, is the most severe form of heat illness. In some cases, it can occur even in people who are not exercising, if the weather is hot enough. Victims of heat stroke have warm, dry, and flushed skin and- despite their exposure to extreme weather conditions- do not sweat. Other symptoms may include a sudden change in their level of consciousness, uncoordinated activity, body seizures, or even cardiac arrest, which occurs when the body is no longer able to prevent a further temperature rise through normal compensatory mechanisms such as sweating.

People with heat stroke usually have a dangerously elevated body temperature of 106 degrees or higher. Some may even lose consciousness. This is a true medical emergency; if you suspect someone is suffering from heat stroke, dial 911 immediately. Don’t wait for the paramedics to arrive to take action; heat stroke victims need to have their body temperature reduced, and quickly because they could develop a lethal arrhythmia or go into multiple organ failure, and their brain cells may literally begin to cook. If possible, immerse the person’s body in cold water, or place ice packs under the arms or near other circulation pressure points. Even spraying the victim with cold water and placing them directly in front of a fan will help some. These people will likely be given IV fluids for re-hydration and may have to stay in the hospital for cardiac monitoring and observation.

In addition to providing students with plenty of water breaks, there are some other steps directors can take to minimize prolonged exposure to the elements. If possible, try to schedule rehearsals before 11:00 a.m. or after 6:00 p.m. to avoid being outdoors under direct sunlight during the heat of the day. If these rehearsals run longer than an hour or two, plan to spend at least part of that time indoors, whether it’s to learn new music, stretch out before or after a rehearsal, or simply to take a break from the activities. Directors may also want to consider easing up on the dress code a bit by encouraging students to wear light-weight, breathable clothing, such as active wear. While running shorts may not be allowed in the classroom, they are more than appropriate for a physical outdoor activity, such as marching in August. By taking a few simple precautions, directors can ensure that summer band camps will be a safe and productive experience for everyone involved.