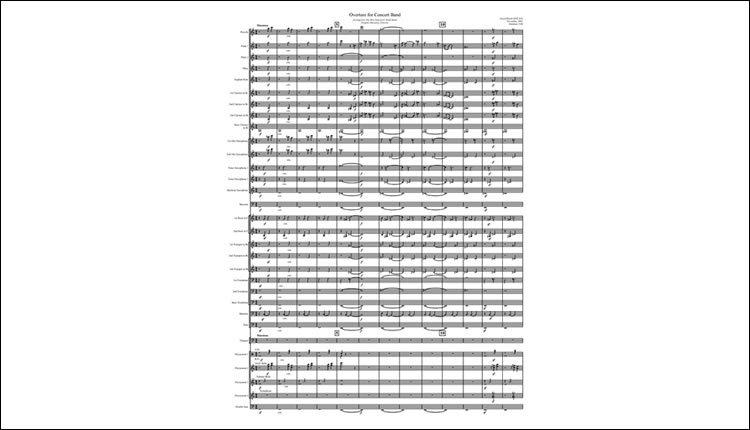 The authors presume that the conductor has been given adequate formal training and now is ready to begin a searching, probing study of the full score, which task is for removed from the ephemeral joy of making music.

Studying the full score Part II Dr. James Neilson and Dr. Karl M. Holvik The authors presume that the conductor has been given adequate formal training and now is ready to begin a searching, probing study of the full score, which task is for removed from the ephemeral joy of making music. Perhaps he has been so busy with other necessary but non-musical details of his job that the hour approaches midnight. This being so, the authors take him by the hand, gently lead him to his desk upon which has been placed a pot of hot coffee and his favorite pipe then they say to him, “Open the score and read therein.” To which the conductor may reply: “But how shall I read, and what shall I read?” Our reply to this innocent seeming question takes on many forms. VI. “NOW ANALYZE THE BASIC RHYTHMIC STRUCTURE OF THE ENTIRE WORK.”

Many band conductors are engaged with their players in a constant struggle over rhythmic observances. Reasons for this struggle are not difficult to find. Underlying all rhythmic insecurity is the fact that an acute sense and feeling for rhythm seems to be an intuitive response. Whether or not an intuitive feeling for rhythm can ever be developed in one to whom response to rhythm is not a natural endowment is open to question.

To the authors it seems that, since music is an extension in ordered sound of the universal rhythm of nature, of all people the band conductor should have this intuitive “feeling” for rhythm that is if he expects to cope with music successfully. Metrical groupings of notes in the score reveal all too little about their rhythmic structure. The conductor makes this plan to the listener by making intelligent decisions about accents, stresses, and the agogics of music. It is the combination of rhythmic factors presented by these three which makes it most difficult to symbolize rhythmic flow and unity in the printed score.

As the student probes more deeply into this matter he finds that better composers are increasingly involved with rhythmic distortion. Thus, the band conductor who hopes to do justice to original works for band by such celebrated contemporaries as Creston, Giannini, Gould, Hindermith, Persichetti and others, must have a complete understanding for aberrant rhythm, a hard fact of life that band conductors tend to ignore. How else can one explain away the lack of rhythmic tension evident in so many interpretations of contemporary music? Here is still another point to consider. Many contemporary composers have returned for rhythmic inspiration to the exaltation of the baroque, that period of music’s history when rhythm was triumphant because the agogics of music had unique and specific meaning.

Agogics have been aptly defined as the kind of accents and stresses which belong to the nature of the phrase rather than to its structure. Agogics accents may be secured by dwelling longer on a note rather than giving it stress power; or by the use of higher or lower melodic tone outside the tessitura of the phrase contour; or by introducing a pungent discord. Thus are power accents removed to allow an interpretation to achieve the lyric beauty of smooth rhythmic flow? Then, too, an understanding of agogics enables a conductor to do an elegant interpretation of the rubato, a flexibility which enables him to stamp the interpretation with the imprint of his own creativity.

Contemporary composers of music for band seem to be less concerned with using lush slow-moving sonorities, and more with using bright, clear timbres in sensitive and sonorous balance. This sonorous clarity is coupled to a rhythmic vivaciousness in a way which is all to the good for band music. Meter and rhythm are not synonymous terms. Meter defines the measured progress of music. Rhythm gives life and meaning to this measured progress. Band conductors should not attach more significance to meter than to rhythm, lest their performance limp along from bar line to bar line, thereby relegating the fundamental purpose of rhythm to obscurity.

During his preliminary study of these matters, the competent band director directs his attention to questions such as these: “How many rhythmic pulsations in each phrase?” “What is the order of their weight precedence, and how much and what kind of weight shall be given each?” “Where in each phrase (and in what specific phrase in the sentence) is the climax of rhythmic exaltation?” “Does this coincide with the melodic climax?” “If these occur at different places in the phrase, how should this be called to the attention of the listener – by a distortion of meter – by nuances of rhythm – or through balancing the sonorities?” “What is the relationship of melodic peaks and valleys of rhythmic pulsation?” “What is the relationship between tempo and basic rhythmic pulsation from one movement to the next in an extended work?” “What relationship does rhythmic pulsation have to the length of the fermata; and to nature’s law of motion in long ritardandi and accelerandi?”

The conductor must also understand a composer’s purposes in using rhythmic devices such as the hemiola, polyrhythms, cross rhythms, dotted-note figures, syncopation, and weak-beat accents. It is quite impossible for a band conductor to get through even an ordinary rehearsal without explaining some of the less obvious things about rhythm to his students. Incompetent band conductors can be faulted in another way. Many of them negate the validity of the long, gently flowing phrase line, and punctuate music to death by setting forth performance that are percussive and brutal rather than lyrical and persuasive. By so doing they make a mockery out of the gentle art of the legato.

Rhythmic punctuation and a clear, concise, incisive articulation are necessary at times. But the lyrical outpouring of glorious song which is one of the crowning achievements of great symphony orchestra has little counterpart in the band world. Band conductors are urged to play a few Bach Chorales each day, then note the positive reaction of students who soon begin to realize that every down beat need not be emphasized. This will be both revelation and a commendable rehearsal technique. While rhythmic sensitivity should be developed by all players, those who play secondary and inner voice parts must receive special training. When accompanying harmonies and counterpoints are played with rhythmic grace they lend additional flow and freedom of expression to the melodic line.

Dr. James Neilson served a lengthy tenure as Leblanc’s educational director during the 1960s and ’70s. Dr. Karl M. Holvik was a professor of music at the University of Northern Iowa.