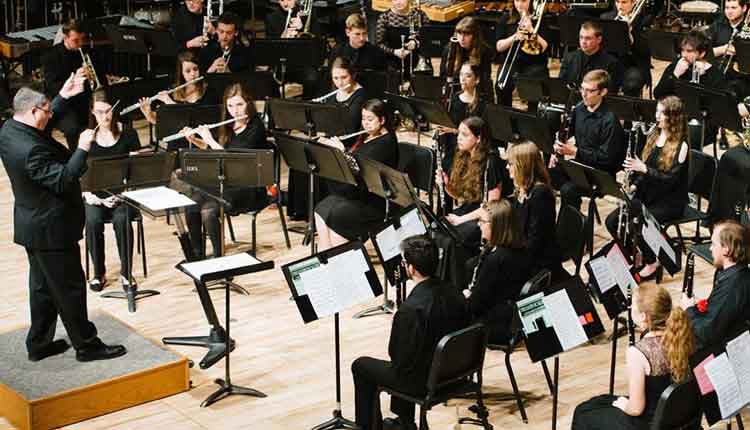 There is an increasing number of reference materials available to the wind band conductor. These are particularly useful in the area of literature, helping the conductor-teacher prepare music for study and performance. I have listed a number of these texts purposely not including books in the areas of pedagogy or philosophy. I have included some books that discuss the history of the band and wind ensemble since literature is usually covered.

Most band conductors recognize Frank Battisti’s enormous contributions to the field. Few would have a better perspective on the development of the wind ensemble. During his years as a high school conductor in New York state and as a faculty member and conductor at the New England Conservatory of Music, he has been a champion of serious music for winds. For example, the Ithaca High School Band commissioned over 20 works from such important composers as Persichetti, Husa, Benson, Bassett, Hartley, and Wilder. This text has considerable value both as a historical and as a literature resource. There are several valuable appendices on various subjects including recommended literature for high school bands, a chronology of selected works, and an extensive bibliography. This is a must-read for serious wind conductors.

This very recently released the second volume follows a very similar format as the first. In this text, there are seven chapters each written by some of the biggest names in the band field (Corporon, Cramer, Lautzenheiser, Lisk, Stamp). They serve as a preface to the resource guides, which again cover 100 works from grades II through VI. Readers should again be cautioned that some of the guides contain incorrect information. This weighty volume (almost 700 pages) will undoubtedly be as popular as volume 1. It was flying off the selves at the most recent Texas Bandmasters’ Convention that I attended in late July. Dvorak, Thomas L., Taggart, Cynthia C., & Schmalz, Peter. (1986). Best Music for Young Band: A Selective Guide to the Young Band/Young Wind Ensemble Repertoire. Brooklyn, NY: Manhattan Beach Music.

These books provide fairly detailed descriptions of selected works deemed by the authors to be the best repertoire for school bands. The first book covers music, grades I – III (late elementary through early high school); the second lists grades IV and V music. The high school book provides more detailed descriptions which also include brass ranges. I might warn readers that the young band book is almost $40 for a publication of only 50 pages; the high school book is the same price but over twice as long. Although expensive, they are well written and valuable resources.

Particularly for those interested in the Eastman Wind Ensemble, this book will be truly rewarding as it lists every program from 1952 through 1992, and includes a complete discography. There are also articles on various topics such as performance practice, the band movement in other countries, history of the wind ensemble, and a detailed and valuable article on the wind ensemble by Donald Hunsberger. Authors include Raoul Camus, Jon Mitchell, Frank Byrne, Michael Votta, and Timothy Reynish.

Published in two volumes, Garofalo presents instructional units for some of the most important works for school bands (Overture for Band, Mendelssohn; both Holst suites, Trauersinfonie, Wagner, Chester and George Washington Bridge, Schuman: volume 1; Air for Band, Erickson, Kentucky-1800, Grundman, Mini-Suite, Gould, others: volume 2). These guides are very detailed, providing considerable information about each piece and includes student assignments, work sheets, and the like.

Few have contributed to the concert band field more than the Goldman family. Many credit Richard Franko Goldman with being one of the central figures behind the rather dramatic improvement of literature for band that occurred after World War II, and which continues to the present. This book provides important historical insights into the performance of serious music by winds including discussion of many of the important commissions and transcriptions/editions by the Edwin Franko and Richard Franko Goldman.

Kreines has achieved some notoriety in the band world through his editions and arrangements of the music of Percy Grainger. This book features short evaluations of works categorized by level of difficulty. The book is a bit difficult to follow since there is an addendum to each section, this causing considerable page flipping. If one accepts this inconvenience and can adjust to Mr. Kreines’ sometimes strong opinions, the text can be a useful and practical guide to the literature.

Eight middle-level band teachers were asked to submit their “top ten” selections appropriate to this age level. The publication is part of MENC’s efforts to help teachers work with the National Standards. The music reviewed is from grades 1, 2, and 3. Short descriptions (instructional concepts/skills, instrumentation, specific requirements/considerations, and general comments) are provided for each piece listed.

This encyclopedia is a “must-have” for serious band conductors. Unlike many of the texts listed in this article, this writing comes from a background of the Sousa, military band tradition, and therefore provides information on many composers not available in other places. It especially features transcriptions and marches. The book first provides a short biography of the composer, and then lists all of his/her works. The list is quite exhaustive.

Robert Boudreau commissioned over 300 works for wind symphony, with some 159 of the scores published by C. F. Peters. Since the works were written for the American Wind Symphony, they are for small instrumentation, usually a group of about 33 players (4 flutes, 4 oboes, 4 clarinets, 4 bassoons, 4 horns, 4 trumpets, 4 trombones, tuba, percussion, and sometimes one or more of the following: piano, harp, double bass). The book provides instrumentation, a brief biography of the composer, a brief description of the work, and a reproduction of a page of the score. Although many conductors do not perform music with this instrumentation, the book is a fascinating read since the commissions come from some of the century’s leading composers including Adler, Badings, Benson, Creston, Francaix, Hovhaness, Mayuzumi, Penderecki, Penn, Rodrigo, Rorem, Surinach, and Villa-Lobos.

Many are familiar with this book. However many forget that program notes can be a good starting point when beginning score study and preparing for teaching, as some of these notes can provide background information. One criticism of this text has been the uneven quality between the different entries.

This book provides an excellent rationale and history for the wind ensemble (one-on-a-part) as well as a listing of some 12,000 works by 2,000 composers. It omits works for large band.

This was an update of Wind Ensemble Literature by H. Robert Reynolds and his conducting students and associates from Wisconsin at the time (including Corporan). They both list repertoire (no textual descriptions) providing instrumentation and publisher. A similar book is by Filix Hauswrith: 1000 ausgewählte Werke für Blasorchester und Bläserensembles. The Director’s Guide to Festival and Contest Music published by The Instrumentalist includes graded listings of both band and ensemble music.

Whitwell, David. (1982). The History and Literature of the Band and Wind Ensemble. Northridge, CA: WINDS. (11 volumes).

David Whitwell is the band conductors’ musicologist. He has contributed enormously to the understanding of the wind ensemble and band. This “encyclopedia” presents a unique view of the history of wind music. This nine-volume set is divided into 2 approaches (historical discussion and literature lists) with each era an section placed in a separate volume. It is truly an excellent resource. Volume 10 and 11 were recently added.

Whitwell describes the text: “The purpose of this book is to supplement the information one receives in undergraduate music history courses and texts, where virtually no mention is made of wind bands.” It is essentially a shortened version of his nine-volume set. For those who want an overview of the subject and do not need the literature lists, this text is an excellent choice. An even shorter version is available: A New History of Wind Music, published by The Instrumentalist in 1972. Whitwell has also written a number of shorter publications such as Wagner on Bands and Berlioz on Bands, available through WINDS, Box 513, Northridge, CA 91328.