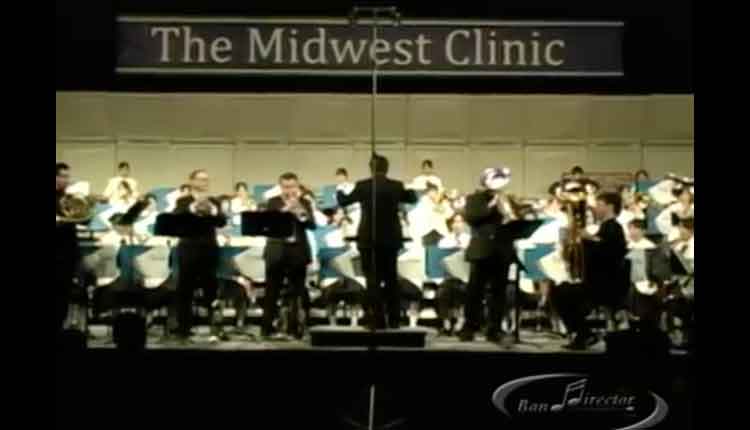 From The Midwest Clinic

The Seika Girls High School Band (Fukoka City, Japan, Yoshihisa Fujishige, Conductor) gave a phenomenal performance at The 2010 Midwest Clinic! In the months since the conference, many attendees have told us how deeply these young musicians impressed them. The concert program can be found on The Midwest Clinic website.

In 2010 Banddirector.com had the pleasure of discussing a possible new commission for concert band with Mark Humphries (Bravo Music) and composer Rick DeJonge. This commission idea developed into an amazing new work scored for brass quintet and concert band is titled, “Introduction and Vivace”. With the support of Jupiter Band Instruments and Bravo Music, the performing ensembles are Boston Brass and the Seika Girls High School Band. This commission will be performed at Midwest Clinic Saturday, December 18, 2010. A possible live webcast is being considered.

Seika Girls High School Band club was established in 1978. Annual activities include the All Japan Band Contest, the All Japan Marching Band Contest, and numerous community events totaling nearly 100 performances per year. Seika gives four regular concerts over two days to showcase annual achievements, which include not only typical band performance, but also singing, playing, and stage marching. As finalists in the All Japan Band Contest, the Wind Orchestra has received 6 gold and 9 silver prizes to date. In 1988, the band was exhibition ensemble at the annual meeting of the Southeast Asian Band Directors Association in Chiang Mai, Thailand. The 100-member club attended the World Championship for Marching Bands (Sydney, Australia) in 1999 and the 32nd Baton Twirling National Rally in 2004. At the 2006 Rose Bowl Parade and Holiday Music Festival, Seika received 1st prize, broadcast on NHK/BS digital. That American tour and Parade was also featured on the TNC televised program “Marching Dream”. They also received a 1st in Parade and HS Marching Show Division at the 2006 World Championship for Marching Bands in Korea. Seika Girls High School Band has been invited to perform at Expo 2010 in Shanghai, China.