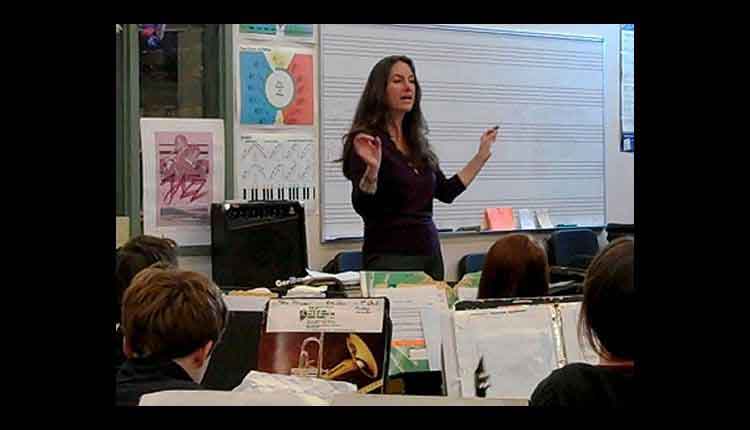 Your middle school band piece reads, con espressione. Now what? Add a ritard? Have the students play a little louder or softer? Go faster or slower? Ignore it?

Increasing numbers of contemporary band work for young bands have passages asking for more expressive playing. Sometimes not marked but equally compelling are other pieces which have considerable expressive potential but rely on the director to actualize it.

There are some techniques which may help increase your expertise in teaching musical expression.

Describe how the piece should sound. Look for recordings of the work you’re studying or of others by the same composer. Do some thinking and reflection. Play it in your head, imagining how it would sound if you made changes to dynamics and tempos, trying to capture the composer’s intent. When you’re trying out ideas, ask another musician to offer suggestions or have someone else conduct while you step back and listen. Tell your students what you’re doing as you look for the best way to convey the composer’s message. Let them know that while the interpretation of some pieces may be obvious, others may be less absolute. Sometimes the process is not a search for the only correct way, but a selection of the most effective of several choices.

Young wind players usually need guidance to plan their breathing so musical phrases can be kept intact, built, or expanded. In large ensemble playing, simply having kids alternate breathing with their stand partners will often smooth out choppy phrases. Find the places, like just after a long crescendo and before the big climax note, where nobody should breathe. Teaching students to mark breathe in their music pays off in performances, when they would otherwise tend to get nervous and breathe in places that break up phrases or cut long notes short.

Help students learn techniques for building phrases, like adding slight crescendos during repeated melodic sequences to shape them and eliminate static sounds. Teaching students to be conscious of phrasing will engage them in the process of making music, not just executing mechanical techniques.

Pay Attention to the Composer’s Markings

While some leave you guessing, most composers provide detailed road maps for articulation and expression. If you help students faithfully execute all the crescendos, diminuendos, students faithfully execute all the crescendos, diminuendos, dynamics, ritardandos, and articulations found in the printed score, you will have done much of the work of showing them how to bring vitality and life to their playing. Take time to explain how to play fp, sfz, and tenuto, so students will begin to look at them as integral, vital parts of the music and not as curious decorations on the page. Trying to perform without paying attention to style and articulation markings could be compared to building a shiny new automobile but omitting the seats or wheels.

Tech students to play dynamics as indicated on their parts. If you go back and correct each omitted dynamic, your band will get the message that they are important elements and not just options. With young players, playing extremes like pp and ff will probably need to be adjusted for their strength and experience. A good rule of thumb is to instruct young players to think of ff and pp as their best loud sound and their best soft sound. Instruct them not to play softer or louder then they are physically able.

Keep working until everyone can play the needed effects. Those not executing properly will tend to cancel or muddy the efforts of others, nullifying the effectiveness of staccato passages, crescendos, and the like. To avoid overworking parts of your concert selections when you’re teaching articulation and nuance, practice them during your warm-up routine. For example, have students play crescendos on whole notes on the pitches of the B-flat concert scale. Practice accents, legatos, fp, and others the same way.

Train Your Students to Watch

You may have vast interpretive powers, but your ideas will have little effect if you and your band don’t communicate. Students need to learn to watch and listen to you and to each other. Most of us have watched performances where each student’s eyes were glued to his or her music and the director’s conducting was indicating things that the ensemble wasn’t producing. Sometimes it looks like the director is visiting another galaxy, leading the Celestial Winds in an immaculate rendition of “Ethereal Highlights”, while the kids of the Middletown Middle School Band sit in the gym at home, each in expressive isolation, trudging through a pedestrian rendition of the “Mediocre Middle School March”.

‘On one music festival, a director had students seated in a somewhat random arrangement with some of the players facing 90 degrees away from the podium. Few seemed to be watching the conductor, who likewise wasn’t looking at them. His stare, fixed on his score, made it obvious that little communication was taking place and, not surprisingly, his group played poorly.

How can you teach watching and communication? Try having your band play a rhythm pattern, like two triplets-quarter note-quarter rest, on each pitch of the B-flat concert scale in your next warm up. Warn them that you’re going to change the tempo, then do it and see if they follow. On one pitch of the scale, don’t give them a downbeat for a couple of seconds and see how many fall into the silence. Done with humor, the exercise can help them learn to watch and inject some fun into your rehearsals.

Think over the kinds of pieces you typically program. Are they monostylistic with few transitions and contrasting sections? If someone described a piece that “sounds like you”, would it be alive with expressive potential, or would it be repetitious, wooden, mechanical, and mind-numbingly dull? Are your selections filled with nuances and opportunities for expression and emotion, or are they mostly trite, popsy, or “cute”?

Without question, style transitions and interpretations provide some of the greatest challenges in rehearsal and preparation, but they also offer some of the most rewarding musical experiences. If you want to attract some of your school’s brightest students and keep them, engage them by offering music which is challenging, interesting, and musically significant.

You can tell by watching their intensity, but students will sometimes make it clear that they’re really getting it. One of my bands was rehearsing “On a Hymnsong of Philip Bliss” and we worked hard to capture its expressive possibilities. During one day’s rehearsal, we finished the piece and, like we often do when a piece ends quietly, students were told not to move after the final release, to let the mood linger. During the resulting silence, a flute player quietly said, “That’s purity”.

Possibly the greatest reason for the failure of groups to play expressively is poor planning by the director. If the performance is only days away and the group is still struggling with notes, rhythms, and tempos, the likelihood of the ensemble playing confidently with expression is dim, at best. If the notes and rhythms are under control a couple of weeks ahead, there’s time to work toward more nuance and expression and do something significant with the music.

Try these approaches and see if you don’t see improvement in your band’s ability to play expressively.

Good luck as you try to help your students experience the challenge and thrill of playing music well and expressively, the way it is intended to sound.