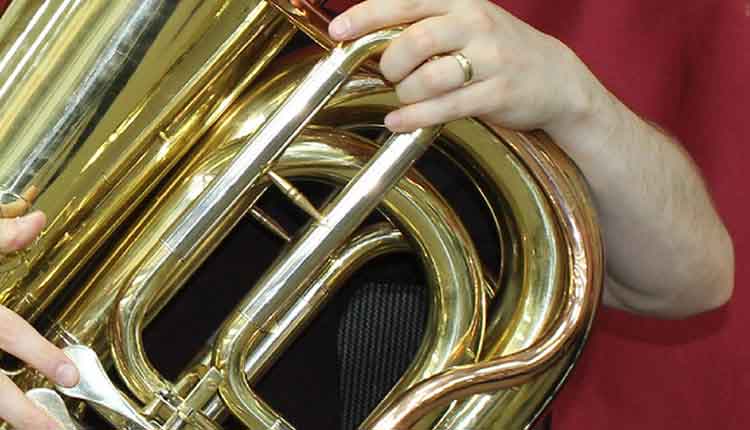 Fine-tuning on the tuba is best accomplished by moving slides while playing, usually the first slide. Large top action tubas can be awkward to hold. A player is fortunate if his embouchure corresponds to the mouth-pipe height and angle. Access to the first valve slide for tuning is even more problematic.

Front action tubas will accommodate a variety of heights and angles. Equally important is that the left hand can easily reach the first-valve slide on most of these instruments and manipulate it while playing. All King and Conn front action tubas are designed for this. One caveat: Any conductors who imagine that they can just “set it and forget it” are dreaming – there is no single setting for all notes on any tuba.

For three valve tubas, players must know how to adjust for 1-3 fingerings and 1-2-3 fingerings. There are acoustical reasons why those fingerings are exceptionally sharp. Unless a player has a well-lubricated first-valve slide and knows how far to pull it for these sharp notes (the low B and the very low E are the worst), it will sound like somebody is moving furniture.

Some four-valve tubas come with the fourth-valve tubing a little bit too short. Players set the length of the fourth-valve slide so the valve alone will give them an in-tune low C and low F. This is no help with the tuning of a low B or low E; if the fourth valve is in tune, the 2-4 combination will be too sharp. The only way to play all of these notes in tune is to set the fourth valve slightly flat. Then, the 2-4 will be perfectly in tune and the C and F must be played with the 1-3, pulling the first slide as necessary. You can’t leave the first slide extended because all other first-valve notes will be unbearably low. If you set the third slide long for Cs and Bs, the D flats and G flats will be unbearably flat. This is an inescapable fact of physics and you can’t have it both ways. The King four-valve B flat tubas have made great strides in the design by transferring the movable section of the first vale slide to the top, where it can be pulled very easily.

Do You Really Need Four Valves?

The fourth valve on the tuba serves two purposes: low-register extension and intonation. For low-register extension, the fourth valve is used on low F an octave below the bass clef. The first three valves are added to descend from there. Three valves will take the player to low E below the bass clef. If your players don’t play that low, you don’t need four valves for low register. For intonation, the fourth valve is substituted for one and three on low C (two ledger lines) and fourth and second are used on low B. Just two notes, but two important notes.

We frequently see four-valve and three-valve tubas playing alongside each other in high school bands. It’s impossible for them to be in tune together – if Cs and Bs are in tune, then G flats and D flats are flat, as mentioned above.

So what’s the best solution? Pull the first slide on the three-valve tuba for Cs and Bs and push it in for everything else. We don’t recommend the use of three- or four-valve tubas in the same band section, unless you’re willing to affect a massive education program for the three-valve tubas to get them in tune. Having to learn fine-tuning by moving slides will be more of a bother than it’s worth to the average student.

The bad news for band directors: Getting a whole fleet of four-valve tubas in no way guarantees excellent tuning. Good tuning can only be achieved by perfect setting of all slides. If you neglect this, you’ll have an out-of-tune tuba section.