Holding the Euphonium Properly Can Make a Difference 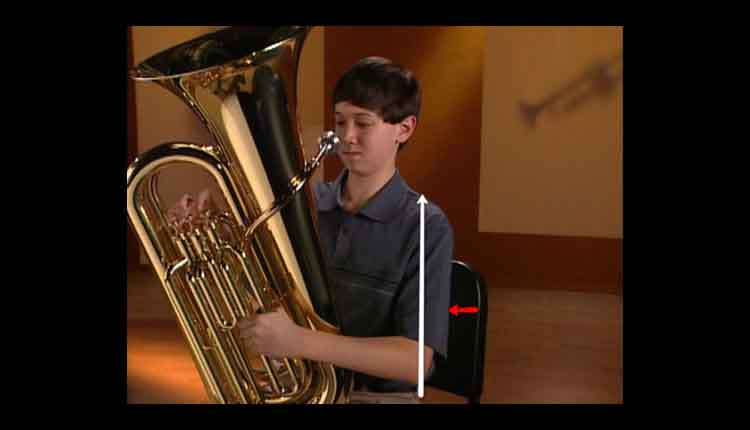 The euphonium is one of the finest melodic instruments in the band. While its popularity has not reached the status of its brass contemporaries, it still serves an important musical function in most bands today.

Many instruments are designed in a way that allows a student to hold the instrument correctly from the beginning stages of playing. For example, a clarinet is set up so that the fingers fit fairly easily over the tone holes, and the thumbs conform nicely to the back of the instrument. Although there are issues concerning specific hand placement, basic proper clarinet hand position comes somewhat naturally.

Unfortunately, the design of the euphonium does not encourage such ease of use. Due to the various shapes and sizes of euphoniums manufactured today, students can often be seen grasping the instrument in unnatural, inhibiting ways. However, the proper positioning of the instrument need not be complex. A few basic ideas can help players of all levels from beginning through college keep their playing at its best.

The upright bell euphonium is more popular today than it was years ago due in part to the more competitive pricing offered by companies on these instruments. These instruments feature a bell that points straight into the air and are typically considered better quality than their bell-front counterparts. Holding this instrument correctly can be challenging. The right hand should be placed on the instrument so that the fingers 1, 2 and 3 sit their tips gently on top of the valve caps. Actually, finger “tips” is a misleading term since the desired position of the fingers really involves the fleshy part of the fingers (opposite the fingernail) resting on top of the valves. The fingers and hand should be curved and relaxed, with a rounded shape similar to how a student would look if he were holding a tennis ball. In this position, the wrist is in a natural position and not bent too far in any direction. The player’s elbow should be extended slightly away from the body, but not excessively so. Having the elbow too close too the body keeps the player from being able to move the right hand easily and does not allow for proper curving of the fingers.

If the euphonium has a fourth valve next to the third valve, it should be played with the “pinky” finger on the right hand. If it has a compensating fourth valve on the side of the instrument, it should be played with the fleshy part of the left-hand index finger. If this finger position and hand position are correct, then holding the euphonium will be more natural because the left hand’s cradling of the horn in this position encourages good posture. If the instrument only has three valves, the student should wrap his left hand around the front of the horn and cradle the body of the instrument in the left arm.

Although bell-front euphoniums are less common today than in the past, they are still seen in band rooms throughout the country. Most of these instruments have three valves and a bell that points to the front.

The right-hand position is similar to that of the upright bell euphonium with its curved appearance and use of the fleshy part of the fingers, but the left hand is typically more perplexing because there are many choices as to where to place it. Some are better than others. One method advocates placing the left hand on the tubing located behind the valve casings. This is an awkward, but an acceptable choice. Other acceptable choices include on the long thick tubing down the left side of the instrument or using the left hand to cradle the base of the instrument. This choice has merit due to the fact that it encourages students NOT to rest the instrument on his leg.

A problem common to both types of euphoniums is the resting of the instrument on a player’s thigh while playing. Resting the instrument there is perhaps the biggest posture mistake that euphonium players make. Although it is a comfortable position, it encourages poor posture because instead of bringing the horn to the face, the player has to bring his face to the horn. With many people, this means having to slouch over and lean in to reach the mouthpiece. Sitting in this position causes undue strain on the neck and back, and keeps the upper body from expanding as much as it needs to in order to breathe properly.

If the hands are in the correct position, most players can comfortably lift the instrument to their faces while keeping their upper bodies straight. This promotes relaxed inhalation and exhalation and also keeps the player from having to strain his neck forward. For some younger players, the euphonium may be too heavy to position correctly. If this is the case, there are several euphoniums stands on the market today that can help bridge the posture gap and establish horn position even if the student is too small to hold the horn properly.

Posture is one of the basics that band directors teach from day one. However, reinforcement of good posture is needed constantly, particularly with instruments like the euphonium. Encouraging proper posture while playing the euphonium can help a player perform to the best of his/her ability.

Whats New for Back to School – Focus on Music