How to Select a Brass Mouthpiece 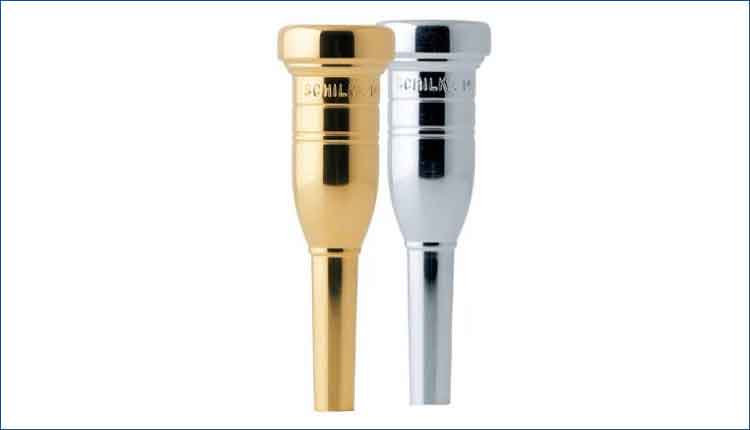 The importance of a superior brass mouthpiece can scarcely be overstated. Many directors and teachers of brass, not to mention their students, have strong convictions about the brand name of the instrument used but tend to neglect the importance of the proper mouthpiece. One should bear in mind that the mouthpiece which comes with an instrument may nor may not be suitable for a particular player. (It is for this reason that Schilke instruments come without a mouthpiece.) In truth, every player should use a mouthpiece specifically adapted to him, his needs, and his instrument. Proper embouchure development, correct breath control, and a good instrument are all important, but let us not neglect a most important variable–the mouthpiece.

In selecting the best mouthpiece one needs to consider the player’s teeth, jaw, and shape of the lips (thickness and width), as well as the strength of the embouchure, the desired tone quality, ease of playing the upper and lower range, endurance, intonation, and the playing done most of the time.

Though a medium width cup diameter, rim thickness, rim contour, backbore, cup depth, volume, and shape may be recommended for the average player, as a general rule it is desired to encourage the use of larger sizes as the embouchure develops. A larger cup diameter and cup volume allows more of the lip to vibrate which in turn produces a fuller and more resonant one. This also encourages more lip control and endurance. The location of the high point of the contour is another variable that should be kept in mind; this changes the feel of the width of the cup.

The sharpness of the edge of the rim or the “bite” affects both the flexibility and precision of attack and is an important variable.

A small or shallow cup produces the brightest sound and aids in playing high notes while a larger deep cup aids in producing the lower tones and produces a richer darker sound. The Schilke “C” cup is a good standard size producing a good tone without unduly favoring either the very high or very low register. The high note craze of some students, especially when high notes are forced or squeezed and often produced on too small a mouthpiece, is to be discouraged. The player with thick lips should choose a somewhat deeper or larger cup to compensate for the extra space his lips take up inside the cup.

A player who needs some help in the upper range should experiment using a shallower first cup with a widened second cup. The shallow first cup facilitates the playing of the upper register while the widened second cup promotes a fuller and richer tone. As the bottom of the cup becomes flatter one’s attack improves but he quality of the tone becomes somewhat coarser. The more the cup shape becomes conical the better is the quality of sound but as this is accentuated the tone may become too dark.

A round and narrow rim contour permits greater lip flexibility but tends to reduce endurance. (Obviously, the amount of pressure on the lips is an important consideration too.) A rather flat and wide rim contour feels the most comfortable but tends to hold the lips somewhat immobile, thereby reducing lip flexibility. For most players a judicious compromise in rim contour is suggested using a mouthpiece which has a reasonable rim curvature to provide flexibility but with sufficient surface to improve endurance.

An average size throat (the narrowest part of the mouthpiece opening) is also preferred for the average player. However with added embouchure development a somewhat larger throat should be tried.

Many brass teachers, students, and mouthpiece manufacturers tend to neglect the importance of the backbore. It is not unusual to find mouthpieces which are superior in every respect except the backbore. Players frequently examine the mouthpiece with great care from the top but never really examine the backbore. Part of the trouble is the backbore is not so readily visible to the naked eye, but probably the more important reason is a lack of understanding of the importance of the shape of the backbore. The tighter the backbore, the more brilliant is the sound; the larger the backbore, the mellower is the sound. Occasionally a change is the backbore will improve the inherent faulty intonation of an instrument. The largest trumpet/cornet backbore I use, often called the Schmidt backbore, gives the largest volume with control. However, should one wish more control, a backbore toward the “a” range would be desirable.

There is no substitute for the careful analysis of a player’s needs, both physical and musical. Some experimentation in testing is encouraged. But the continuous seeking of the “perfect” mouthpiece is certain to produce only frustration.

All teachers and players of brass instruments, both professional and amateur will benefit much by understanding the various parts or surfaces of a brass mouthpiece and what functions each has. Only then can one make intelligent and practical recommendations as to which mouthpiece will produce the desired results with a particular player.

Lack of controls in the manufacture of mouthpieces has been found through extensive testing of mouthpieces. Some manufactures do not hold tolerances very well. It is for this reason that marked differences can be found within the same mouthpiece category of the same manufacturer, so much so that often two mouthpieces labeled differently are more alike than two which are labeled the same. This variance is often particularly noticeable when comparing the same mouthpiece made in different years. (Shapers are sharpened, and to sharpen them some metal has to be removed. This, a change in dimensions. Shapers at the Schilke factory are replaced not sharpened.) It should be mentioned that small differences in dimensions, too small to be discerned by the naked eye, can be discerned by a discriminating player as well as with special measuring tools.

When a player wishes a better mouthpiece, I usually ask him several questions. What mouthpiece are you using now? What difficulty, if any, do you have with that mouthpiece? In what direction do you want to go? A change of tone color? Increased range? Better intonation? Increased endurance? The answers to these questions determine what new mouthpieces should be used. For example:

These are but a few examples of the many problems of trumpet players and the suggested solutions.

It is not unusual for a performer to be completely satisfied with a particular rim and cup he is using but wishes a different tone quality. In this case it is a simple matter to duplicate the desired rim and cup exactly (regardless of make) and adjust the throat or backbore and provide him with a custom mouthpiece.

At times a player may have air escaping at the side of the mouthpiece. Usually this is not the fault of too little pressure, but stretching the lips (instead of contracting them): perhaps his teeth and jaw formation is too irregular. Mouthpiece pressure reduces endurance because the blood circulation in the lips is cut off and lip swelling results. On the other hand, widening and flattening the mouthpiece rim contour will compensate only in part for added pressure. Carrying this type of mouthpiece too far reduces lip flexibility and the desired exact point where the lips cannot and should not vibrate. Pinching the lips using too much mouthpiece pressure, and using too small a mouthpiece (unless absolutely essential) are no substitute for embouchure development.

Every teacher and player should recognize that a mouthpiece on an instrument will not sound the same to the payer as to one standing distance away. A good tape recorder is very helpful. Furthermore, the same mouthpiece and instrument can actually sound different when played by two different people, differences in the formation of lips, teeth, jaws, not to mention breath control and experience. all contribute to differences in the sound. Again, there’s no substitute for adapting the best possible mouthpiece to the player’s needs. This must be considered too when trying to have a perfectly blended brass section to produce the ultimate in uniform tone quality.

Two serious shortcomings are often overlooked by both teachers and players of brass instruments. The first is when a mouthpiece is a bit too large: a gap will exist between the end of the mouthpiece and the inside of the tubing, the mouthpipe as illustrated here.

When a nodal point of a vibration (sound) hits this gap or depression the result is the same as if the mouthpipe had a sudden bulge. Since the most crucial part of any brass instrument is the mouthpiece followed by the mouthpipe, one can see the seriousness when the mouthpiece does not butt against the end of the mouthpipe. This shortcoming can be corrected by turning down the shank a bit on a lathe. One should remember that when a mouthpiece is farther in the mouthpipe that the pitch of the instrument is raised, this requires pulling the tuning slide a bit.

Equally serious is the opposite of the foregoing, namely when the end of the mouthpiece is too small and goes inside of the mouthpipe. This can happen if the foregoing fault is over-corrected by turning down the shank too much. Both faults just mentioned are serious and occur frequently on all brass instruments. If you are a discriminating teacher, player, or music-merchant, it is most desirable that a particular mouthpiece fit the instrument exactly.

Since it is impossible to deep dirt from coagulating in a mouthpiece, and since any dirt especially in the throat and backbore interferes with intonation and playing ease, it is imperative to keep the mouthpiece clean. A mouthpiece brush should be used every week.

When a mouthpiece has the silver plating worn or ground off, it can be replated. Please send it directly to the Schilke Company. However, if the mouthpiece has become nicked or badly corroded, it is best to replace it entirely.

Be sure to write down or memorize the exact number of your Schilke mouthpiece so that if you should lose it, you can order an exact duplicate.

As every knowledgeable person in the brass world knows, it is undesirable to use too much mouthpiece pressure to hit the high tones. Instead, one needs to develop the embouchure muscles. This takes time. Also, it takes time to get used to a new mouthpiece, especially if the cup diameter is larger than the previous one a player used. However the high register will need to suffer only temporarily.

In selecting a brass mouthpiece one should strive for optimum tone quality and accurate intonation rather than ease of hitting the high notes, unless the latter is an absolute “must.” Often the best possible mouthpiece is an intelligent compromise. Every teacher and player should strive for the optimum combination of the major variables. As with many things in life, there’s more to a fine brass mouthpiece than what meets the eye.

Click here to visit Schilke Music to view the variety of brass instruments and mouthpieces available.

What Are You Teaching?

Four Ways to Know Your Part