A Teachers Guide to a Happier Tuba Section 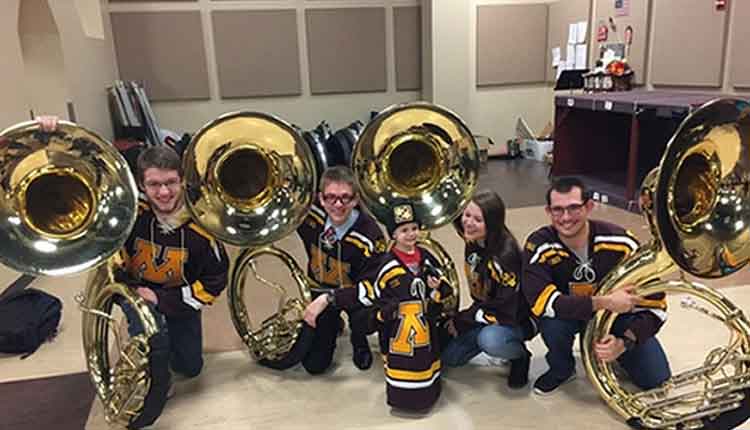 I. Who’s right for the tuba?

Johnny, the 6 foot, 200 lb 6th grader can probably bench press the tuba AND a 200 lb set of free weights at the same time? The football coach, who is equally aware of Johnny’s talent, is likely having Johnny over to his house 2 or 3 times a week for pizza and burgers. Think about it, at 11 or 12 years old, football may be more appealing to Johnny than the tuba. So, let’s be realistic, who’s right for the tuba?

Actually all of the above could be a possibility.
I do not believe that size is the most important consideration. There are too many examples of fine tuba players who are slight in stature (do not exclude women). Yes, air is crucial but the person with smaller vital capacity simply has to breathe more often than the individual with a 7-liter vital capacity! Efficient breathing is the real consideration. The important point to remember is the inhalation must be as relaxed and full as possible, like yawning. Do not over analyze breathing. It should be natural. A complete dissertation on breathing can be lengthy and best saved for another discussion.

II. What instrument is right for the player?

In the early stages, if the tuba is too large the student will be uncomfortable playing it (frustration again). Mom or Dad will not enjoy putting massive 4/4 tubas in the back of the car and everyone becomes discouraged. Not a good formula for retention!

III. Three Words On Mouthpieces: NOT TOO LARGE for beginners!

Personal Tuba Purchases:
The CC Tuba and the prospective university tuba/music ed. Major: DO NOT fear the CC tuba. It can be used successfully in a section with BBb tubas. If a student is going to major in music, the CC tuba will very likely be the choice of any serious tuba teacher.
Students must make an Investment: Commitment helps with retention.
Student Purchases: DEG Tuba Rest, Mouthpiece, and brass maintenance products (oil, snake, grease, etc.)

The tuba is obviously a very large instrument with an open tube of approximately 18 feet (before adding valves). This results in an extremely slow response as compared to the other brass instruments. It is very important then, that fundamental brass skills be as finely tuned as possible. This is best achieved through the studies mentioned in 2 above. The development and refinement in these basic skills will greatly improve the intonation, tone, and precision in your band or any ensemble that a tubist plays in.

LITERATURE – Supplement the band method or music with etudes, solos, technical studies, duets, trios, and quartets. A solo/ensemble contest is not the only time students can perform chamber music. The University Interscholastic League Prescribed Music List is a great source for suggestions of this literature.

They are not used to playing melodies. Because tubists in bands are all playing the same part all the time, they depend on each other for rhythmic security more that any other section. Is this because they are less talented? I believe it is because the musical motivation is generally not given to tubists to develop their musicianship, independence, etc. Flutists, clarinetists, trumpet players are faced with these musical challenges almost from the first day they play an instrument. You figure it out. Greater independence = more confidence in a normal ensemble situation and hopefully less boredom and greater retention.

If we never play anything more challenging than simple whole notes and quarter notes in a supportive role, the musical challenge is not very strong. How then can we learn to be really expressive, even when we play those whole notes? We develop a greater understanding of music and hopefully a deeper sensitivity to music through the study of melodic material. When this happens you can get into students hearts. Tubists develop a love of music which results in better retention and you have happy tuba players who are with you forever.

Don’t forget the tuba players just because they are in the back, far away, and due to simple parts require less of your time than the clarinet section. They are your foundation. It’s up to you to give them the tools to become good musicians. DO this and you will have a Happy Tuba Section!

Richard Murrow is the principal tubist with the East Texas Symphony Orchestra, Texas Chamber Orchestra, American Chamber Brass, and is co-leader of the jazz group, “Brazzology”. He has also played and recorded with both the Dallas Wind Symphony and the Dallas Jazz Orchestra. In 1996 Mr. Murrow recorded his first feature CD with Brazzology co-leader, Larry Spencer, entitled “Pick Yourself Up”. “Pick Yourself Up” has achieved international success with sales throughout the U.S. as well as Europe and Japan. He has recorded numerous commercial CD’s, plus radio and TV jingles. Richard is a former member of the U.S Naval Academy Band and The Navy Show Band. In his early career Richard traveled with the Ringling Bros. And Barnum & Bailey Circus Band, The Moscow Circus, and Ice Capades. He has also played with a host of international artists including Mel Torme, George Shearing, Brian Wilson, The Moody Blues, and Robert Guillaume just to mention a few.

In addition to his love of the tuba, Richard is also a freelance bass player. Part of his bass duties include playing with the Celebration Band at Stonebridge United Methodist Church in McKinney, Texas, a position he has held since January, 2000. He has also spent countless hours over the past 35 years playing bass in every musical genre from pop/commercial, rock, jazz, country, to stage musicals and recording studios.

Richard Murrow has taught Tuba and Euphonium at Texas Christian University since 1996. Prior to his appointment at T.C.U. Richard Murrow taught at the University of Texas at Arlington for fifteen years. As an educator Mr. Murrow has given educational clinics and solo performances at over 250 universities and high schools during the past ten years. From 1978-1998 Richard taught over 25,000 hours of private low brass lessons in Texas public schools in the Dallas-Fort Worth Metroplex. Additionally, his teaching and performances have taken him over most of the United States, as well as some fifteen countries in South America and Europe. In 1999 Mr. Murrow was a guest soloist with the National Orchestra of Peru, in Lima, Peru, where he also taught at the Lima Conservatory. Richard Murrow is a tuba Artist/Clinician/Design Consultant for the Miraphone Corporation of Waldkraiburg, Germany.