In fall 2018, All Japan Tours had the immense honor to host the Ohio Northern University Marching Band in an excursion across Japan. In addition to visiting the country’s most well-known cities and sights, the band held three performances and even got the chance to share their passion for music with Japanese students. One-part vacation, one-part concert tour, and a dash of foreign exchange combined to make the perfect field trip. 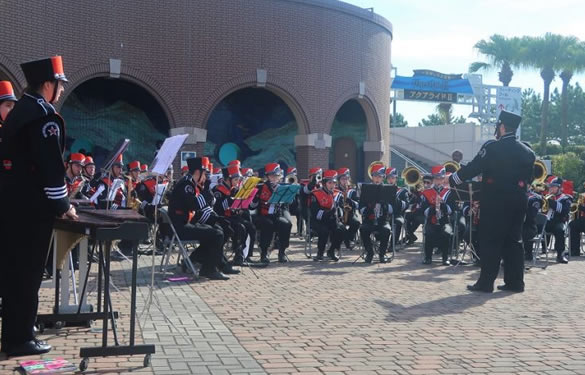 Getting from Ohio to Tokyo means flying for almost a full day and adjusting to a thirteen to fourteen-hour time difference. Despite the long haul, the ONU Marching Band was ready to rock and roll less than 24 hours after arriving. Their first gig took place in Seaside Paradise-a marine-life theme park comparable to the U.S.’s SeaWorld-on Hekkejima Island in Yokohama.

After setting up in front of the dolphin tank, the band took a few moments to warm up then burst into ONU’s fight song. A curious audience swarmed around them before they could move on to the second number. As they blew their horns and beat their drums, children and parents bounced along with pop hits, and grandmas and grandpas were moved to tears by ONU’s rendition of “Sukiyaki (Ue o Muite Aruko)” by Kyu Sakamoto.

After the show, the band members enjoyed Seaside Paradise’s attractions like exploring the penguin habitat, playing with otters, and trying some of the local seafood and fish for lunch. 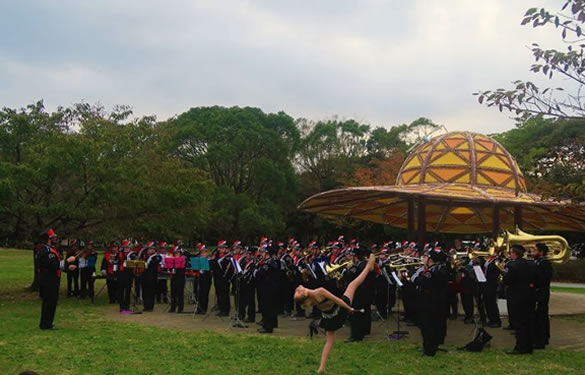 The next day, ONU’s Marching Band was back at it again at Makuhari Seaside Park in Chiba Prefecture. It was a moderately chilly November afternoon, but plenty of people had come out to get some fresh air before the winter cold settled in. The park’s attendees were delightfully surprised by the sudden appearance of the uniformed musicians and clapped along to their favorite tunes.

The baton twirlers brought particular inspiration to this production as they displayed amazing feats of balance and poise. Unbeknownst to them, two elementary school-aged girls had brought their own batons to the park for practice. Although novices, the little girls tried their best to match the tricks of their “older sisters,” and begged to take a picture with them immediately after the finale. 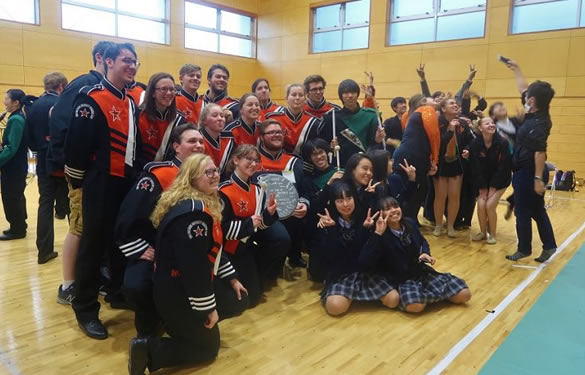 After a week of well-deserved rest, relaxation, and sightseeing, the band came back to Tokyo for their third, and most exciting, recital. As representatives of their university, it only made sense for the members to get a chance to meet some of their Japanese peers.

The program began with the three schools standing up together and, under the direction of ONU’s Dr. Charles Bates, performing “Stars and Stripes.” Music is a language that doesn’t need words, and the students, who were strangers just moments before, were a testament to it.

The students of Chihaya High School headed the concert with a toe-tapping jazz piece, and Daito Bunka University followed with a melodic repertoire. ONU closed out the show with a performance that was balanced in precision and spirit.

The real fun came afterward when the 100-plus students put down their instruments and picked up their cameras to take pictures and chat with their new friends. The students’ faces dropped when they learned we needed to wrap things up, but ONU picked up the energy again by leading everyone out the door in a rhythmic drumline.

For many of the ONU Marching Band members, it was their first experience in Japan, but it’s hard to say who got the most enjoyment out of the tour… the American students, or the Japanese people who had the pleasure to meet them!

READY FOR AN EDUCATIONAL TOUR IN JAPAN? CHECK OUT OUR STUDENT GROUP TOURS BY CLICKING HERE!

Travel is back! Visit the United Kingdom

We Applaud YOU –A Message from Suburban Tours