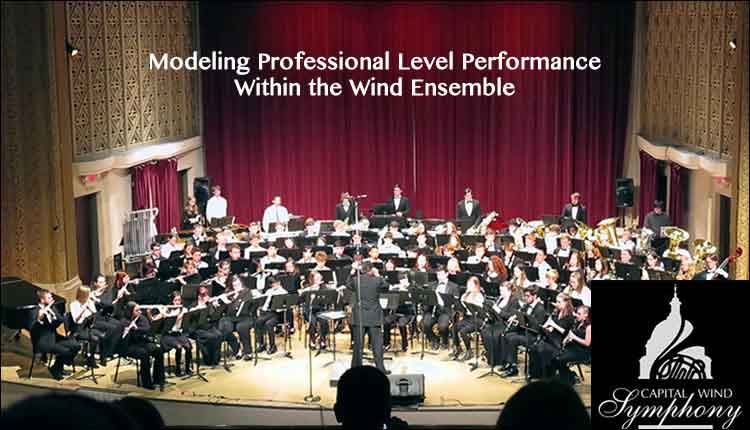 Over fifteen years ago, I created an educational outreach program for school ensembles in Fairfax County, Virginia, a suburb of Washington, D.C. Having been a music educator and conductor for many years, I have always known that, by playing for my students, they are able to grasp concepts much more quickly.

George Etheridge is the conductor and music director of the Capital Wind Symphony, a professional level ensemble in the Washington DC area Educated at the University of Michigan and the Paris Conservatory,Mr Etheridge is a highly successful performer,conductor and educator, having played professionally and taught at all levels of education.

In 1997, Mr Etheridge created what has become a highly effective and unique educational workshop for the Fairfax Symphony Orchestra.”In over 200 workshops for band and orchestras in the Fairfax County Schools, we have placed professional musicians in every section during a full band rehearsal clinic to demonstrate proper concepts of performance. In conducting these workshops, I have found that the examples set by these exceptional musicians make a remarkable and dramatic change in the performance of the ensemble.”

The Workshop event engages the foremost professional musicians in and around the nation’s capital to work and perform with every section of your band during a 90 minute full band rehearsal clinic to demonstrate proper concepts of performance. The examples set by these exceptional musician/teachers make a remarkable and noticeable change in the performance level of any ensemble.

“My students are definitely sounding better now that they have heard how the music could and should be played,” commented one director. “Students couldn’t believe that 17 professionals made a bigger, better sound than the 65 members of their band!” commented another. Directors will also learn new skills by observing the session and can bring these skills back to the rehearsal hall and to all the ensembles at the school.

Capital Wind Workshop Musician clinicians represent some of the finest musicians our nation’s capital has to offer. Distinctly experienced in working with young ensembles, these instructors sit side-by-side with students demonstrating and instructing individual sections within the larger ensemble. The result is a more complete understanding of educational concepts that result in remarkable and dramatic results in the ensemble’s performance.

Capital Wind Workshops are available at all times of the year and are scheduled at least thirty days in advance. Each workshop and venue is 90 minutes in duration and is customized to fit the needs of your ensemble and its current level of performance. In all cases, the Capital Wind Workshop curriculum provides for enhanced musicianship and individual learning that will augment the music education experience for every student. This educational event will be a highlight of the school year.

Some of these instructors include:

Betsy Winslow Trimber, Flute – She attended The University of South Carolina S.U.N.Y at Stony Brook and the University of Southern California where she earned an MM in Flute Performance. Betsy is the principal flutist and a soloist with the American Balalaika Symphony and co-principal flutist and board member with the Capital Wind Symphony. She is involved with Partners in Performance, a co-director of the Suzuki Association of the Greater Washington Area Flute Institute, soloist for Concerts with a Cause and the Washington Metropolitan Symphony Summer Concert Series. Betsy is also the owner of The Flutist’s Faire, in Alexandria.

Laura Grantier, Clarinet – Laura is a member of the United States Navy Band in Washington D.C. She earned a Bachelor of Music from the University of Alabama and a Doctor of Musical Arts from the Catholic University of America. Prior to her appointment with the Navy Band she was pursuing a Master of Music at the Eastman School of Music. Laura won the University Concerto Competition and traveled to Guatemala and Costa Rica to perform recitals and teach master classes. She has performed both nationally and internationally in both solo and orchestral settings and presented at several music education events throughout the nation. She is also the founder of the Navy Band Clarinet Day presented annually in the Washington D.C. area.

Jason McFeaters, Saxophone – Since, 2009, Jason has performed regularly with the Baltimore Symphony Orchestra, including performances at the Kennedy Center and Carnegie Hall, and can be heard on the orchestra’s recent recordings of “Bernstein’s Mass” and “Gershwin Piano Concertos”. He is principal saxophonist with the Capital Wind Symphony. He studied at the Peabody Conservatory in Baltimore, Maryland and at the University of Michigan.

Fred Marcellus Trumpet – Fred holds degrees from the Eastman School of Music and Wichita State University. A native of the Washington, D.C. area, he is an active teacher, clinician, adjudicator, soloist and freelance trumpet player. He has performed with many groups in the Washington D.C. area including the Washington Ballet Orchestra and the Alexandria Symphony, among others, and has been a substitute with the National Symphony Orchestra and the Washington Opera Orchestra. He was a member of the “President’s Own” Marine Band and is presently finishing his military time with the Band of the Nation’s Capital, the 257th Army Band.

Andrew Wilson, Trumpet – Andrewis the retired Solo and Principal Cornet with The United States Air Force Concert Band in Washington, D.C. He is an active freelance and recording artist in the National Capital Region and is the principal trumpet of both the McLean Orchestra and the Manassas Ballet Theatre Orchestra. Andrew is a member of the Capital Wind Symphony and frequently appears with the Maryland, Alexandria, and Arlington Symphony orchestras. Andrew has received music degrees from both The Ohio State University and The Catholic University of America.

Ken Wolfe, Trombone – Ken is also an active teacher with many of the top performing students in the MD, DC, VA area in his studio. His students dominate the youth orchestras and honors county programs in the region and many leave his studio to pursue professional careers in music. His performance career has focused on small ensembles as well as developing the trombone as a solo and chamber instrument. He studied at the University of Massachusetts, as well as at Interlochen and Tanglewood. Ken is the principal trombonist of the Capital Wind Symphony.

David Murray, Percussion – David earned a master’s degree in music from the Eastman School of Music in Rochester, N.Y. in 1996, where he studied with John Beck. In 1992, David won a position with “The President’s Own” U.S. Marine Band in Washington, D.C. David’s musical experience runs the gamut from playing blues, jazz, rock, and country in the honky-tonks, juke joints, and clubs of Louisiana and Texas, to playing orchestra concerts on tour with Joshua Bell in the world’s finest concert halls, to playing for world leaders and dignitaries at the White House and State Department. He has toured in all 48 of the contiguous United States, in much of Europe, and in the former Soviet Union.

Capital Wind Workshops are available at all times of the year and are scheduled at least thirty days in advance. Each workshop and venue is 90 minutes in duration and is customized to fit the needs of your ensemble and its current level of performance. In all cases, the Capital Wind Workshop curriculum provides for enhanced musicianship and individual learning that will augment the music education experience for every student.

The Questions You Should Ask when planning a student trip