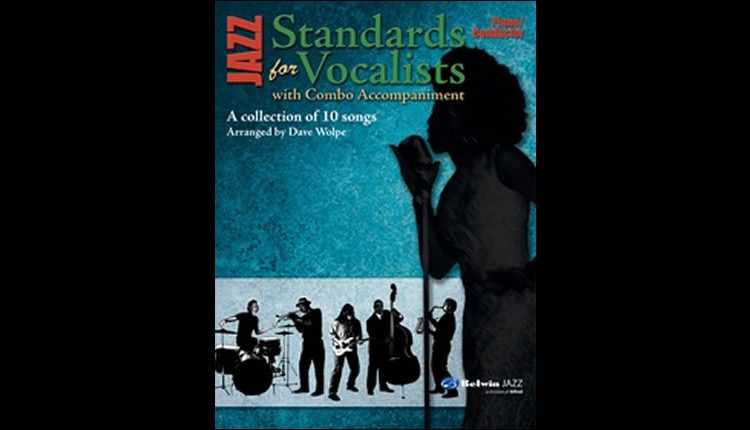 A collection of ten songs
Arranged by Dave Wolpe
Belwin Jazz, a Division of Alfred Music

Here are ten solidly-scored arrangements in a jazz style. The ensemble sound is tight and full behind the vocalist. Wolpe skillfully uses plenty of contemporary-sounding fourth voicings between the top two instruments.

The songs included in the book are:
“I’ve Got You under My Skin” Bb major
“Summer Wind” C major
“They Can’t Take That Away From Me” Bb major
“How High the Moon” C major
“My Funny Valentine” G minor
“Something’s Gotta Give” G major
“Too Close for Comfort” Ab major
“I Get a Kick Out of You” Bb major
“Just Friends” C major
“Night and Day” C major

Improvised solos are written out with chord changes for the following instruments: trumpet, alto sax, tenor sax, and trombone. Most of the solos are eight to sixteen measures in length.

The vocal tessitura extends from a low G below the staff to C above middle C in the treble clef. This range is unquestionably for low female voice (alto) and should be so marked for greater clarity of selection.

I would suggest that chord symbols be added to the vocal part as a frame of reference. Some vocalists choose to play the keyboard changes while rehearsing the voice part.

The trumpet range extends upward to a written high D above the staff. There are not too many of these high notes however.

The optional baritone saxophone part plays mostly roots of the chords and is asked occasionally to play a low “A” below the staff. Regrettably, not all baritone saxophones are equipped with this low “A” key, particularly among school and amateur players.

The bass part is very fundamental in nature. The bass plays mostly the root or fifth of each chord, resulting in many repeated notes. There are few if any passing tones or scale tones connecting chords, which is typical in jazz playing. It would be helpful to include chord changes in the bass parts. This would provide the bass player a frame of reference and allow him/her to modify the part for greater linear interest.

The trombone part extends up to “G” above the bass clef, and is generally in a comfortable range throughout.

The tenor sax is occasionally asked to play a written low “B” below the staff.

The piano/conductor’s book contains two lines of score with cues for the horns, and lyrics and chord symbols are included.

The dynamic markings are carefully placed in each part in order to attain maximum results.

The selection of ten “Sinatra-style” songs is limited to eight moderate swing numbers, one ballad, and one fast swing number. A noticeable lack of variety is evident, as the collection could have benefited from the addition of a Bossa nova, (“Meditation”) a jazz samba, (“Softly as in a Morning Sunrise”), and a slow groove number (“Nice ‘N Easy”).

In order to assist the ensemble, the parts could include terms like “Unison” and “divisi” so the players will know when to turn the vibrato on or off especially in ballads.

This compilation of ten songs, while limited in variety, is highly recommended due to the hip voicings, good clean unobtrusive backup lines, and the clear musical expression offered by Dave Wolpe.