A TRIBUTE TO THE ARMED SERVICES 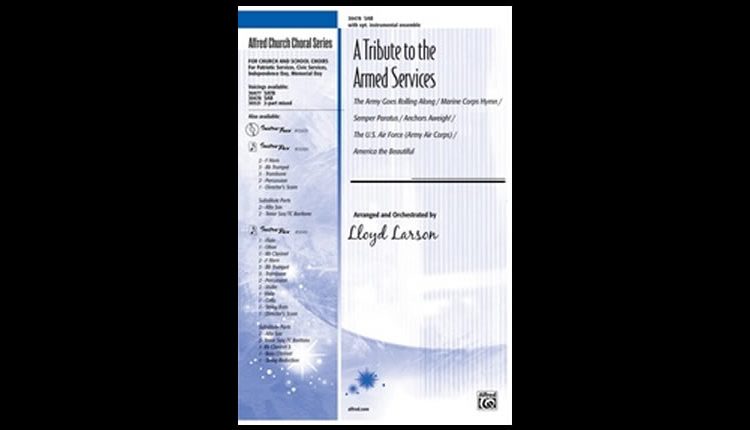 A TRIBUTE TO THE ARMED SERVICES

A Tribute to the Armed Services is a medley of six patriotic songs includes: The Army Goes Rolling Along, Marine Corps Hymn, Semper Paratus, Anchors Aweigh, The U.S. Air Force and America the Beautiful. One chorus of each song is presented in this medley.

This two-part mixed voice arrangement has an available fully-orchestrated accompaniment. Two versions of the accompaniment are available, full orchestra or brass and percussion only.

This arrangement is suitable for high school or middle school singers, and will make a full-sounding selection to conclude a concert program.

A broad, majestic piano introduction leads to a march tempo (quarter note = 108) which is maintained until the last song, America the Beautiful, which is performed slower at (quarter note = 96).

The vocal ranges are comfortable with a lot of “safe” unison writing with occasional divisi in thirds (10ths) or sixths. The tessitura for the men is from D in the bass clef to an octave higher D above the staff. When the women’s part extends to an “E” on the top space, an optional lower note is given for the lower voices.

For the most part, the medley is written in unison with a few imitative measures. The entire chorus sings throughout thus resulting in a sort of monotony of vocal coloration. This arrangement would be more effective for example if The Marine’s Hymn could be sung by just the men to achieve a virile, masculine tone quality.

It would be more stimulating to use an antiphonal section written between the men and the women for even greater variety in vocal sonority. One or two of the songs would benefit from a counter line or obligato sung by the women, as the men resonate with the melody.

Even with its apparent lack of variety in scoring, this medley can be learned with a minimum of rehearsal time, and is an good way to stimulate a patriotic response from the audience.

America the Beautiful is sung using an alternate verse not often heard with this song. This is a refreshing touch.

The piano-vocal part lists for $1.95. This medley is also available for S.A.T.B and S.A.B voices and a split/ accompaniment/full performance compact disc are available separately.

View this piece at Alfred.com