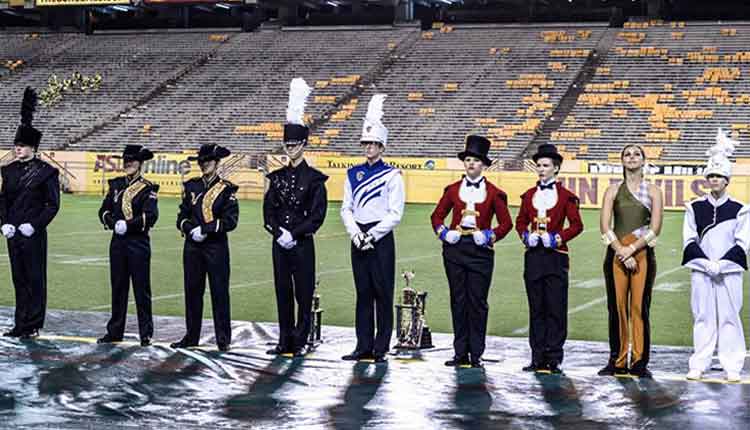 What is Your Band’s Identity?

Regardless of whether your marching band is competitive or not, it is important that the band develops a sense of personal identity to avoid becoming a “cookie cutter” band. The most successful competitive programs generally have a real sense of ‘Who We Are’. This identity stems from several components, and over time lends to what your audience, adjudicators, other bands, come to know and expect of your group!

Factors involved in developing an Identity

There are very many factors involved in developing a sense of identity or style.

Some of the factors are those which you can develop, stretch and mold over time and others are inherent to your situation and relatively unchangeable.

Let’s take a look at those things first which must be considered that are not malleable.

In general the school colors of your marching band are a factor of band identity over which you have very little control, but is a huge factor in the creating of identity and effect. To underestimate the role that color plays in a marching band program in terms of effect and portrayal of mood can be a huge detriment to the success of the ensemble. The use of color, contrast, blends of color, visual weight of color, etc. is all important in the creation of effect, and establishing your band identity.

For the most part our school colors cannot be changed. Depending on the expectations of administration, community, boosters and others important to your program, we can choose to Play-up or Down-play the school colors with which we have been “Blessed”.

Learn the characteristics of the colors that you are stuck with, visual weight, hot or cool, dark or light, contrasting colors, blending colors. Create a color wheel of possibilities from which you can draw to create desired effect while playing off the uniform colors that already exist.

Is the community tolerant of school colors being neutralized or eliminated in terms of an alternate competitive uniform, or costume?

Is the community tolerant of the color guard or other elements of the band branching out from school colors, or adding to the school colors with accent or complimentary colors.

Generally this has little effect on most marching bands in terms of the Identity of the band on the field. HOWEVER- some programs have a struggle with the communities “OVERINDULGENCE” of the school mascot. In most cases this finds its way into the Marching Band Identity when the Mascot becomes a factor in UNIFORM DESIGN or IMAGERY.

Some programs “Marching Patriots” “Marching Indians” “Marching Scots,” from choices made in uniforming the band early on in the band history, continue to struggle with the effects that those choices have on the ability to develop an identity that works for a competition band. The obvious struggle with identity is that it locks the band into a pallet of musical styles, show themes, color pallets, and modes of expression that are viable in the bands present costuming.

It is important to again know “how far can I the director go” to neutralize the effect of the mascot on the field identity of the band.

Areas of band identity which are more related to the decision making of the director and staff, and are somewhat malleable:

Many bands have a recognizable identity developed over time with respect to Show Concept/ Musical Repertoire/ Production Elements.

5. Other decisional elements of band identity

The following should all be considered in the development of a Band Identity.

Resources you have available

“That’s Entertainment” Theory. What background does the community come from with respect to Entertainment? Is the limit of the entertainment resource in the community NASCAR and WWF, or has the average community member been exposed to Musical Theater, Ballet, Opera, Drum and Bugle Corps, Symphony, Winter Color Guard?

A general rule of thumb relating to identity- It is best to not imitate another bands established identity UNLESS:
You can do it better
You have the variables in place to succeed
You can bring something new and fresh to the Identity

It is better to be a believable you than a cheap imitation of someone else!!!

As you go about the creation, planning, and implementation of the marching band unit this year give some thought about how the decision making process will feed the creation of your band identity! We can all be “out of the box” thinkers while still building upon the security of the group in knowing who they are. If we challenge ourselves to think about our favorite drum corps, or our favorite competitive high school marching band, or our favorite university marching band, we must consider that most of the top groups possess that feeling of identity. Furthermore, when we look at groups that are on the verge of greatness, and have just not quite arrived, ask this question. Are they comfortable and secure in their identity, or are they still trying to play the game in some other unit’s identity shoes?!

Marty Spitzer is the Director of Marching and Athletic Bands at the University of North Carolina at Pembroke, in Pembroke North Carolina, where he also teaches applied saxophone and courses in the instrumental music education curriculum.

Marty has served as an adjudicator of regional and state level marching band, color guard, and indoor drum line and concert band events in Ohio, North Carolina, Oklahoma, Florida, Kentucky, Wisconsin, New Jersey, Connecticut, and Indiana. He has served numerous terms as a member of the marching band advisory board for Bands of America and a term as President of the Mid-States Band Association.

He has also served as a clinician in the marching band adjudication area for several state and independent adjudication governing bodies, as well as a regular guest conductor for high school honors concert bands.

Creating a New Uniform for Today

Behind the Uniform Bluecoats 2018 Stanbury Proud

What is the proper way to evaluate a uniform?

Who should prepare my specifications?