by Larry Panella, Associate Professor of Music, The University of Southern Mississippi 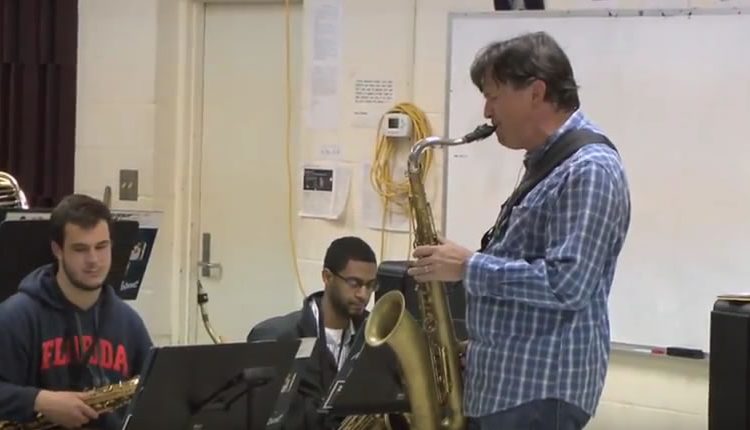 by Larry Panella, Associate Professor of Music, The University of Southern Mississippi

Most musicians are familiar with the expression for practicing known as, “wood shedding,” a.k.a. “shedding” for short. When I was a student at the University of North Texas, the lower level players were referred to as “lizards” because “they hadn’t shed their scales.” Scales are a part of music that many student instrumentalists treat as a hoop to jump through rather than a necessity for becoming a better player. They will only work on them because a teacher insists on it, “but they ain’t gonna like it!” Part of the resistance to embracing scales stems from the fact that every instrument has at least one key center that doesn’t lay well on the instrument, e.g., the key of “B” on the trombone is a major hassle. Another problem is that scales can be downright tedious and that can lead to a student glossing over details such as making them rhythmically even.

The solution is first to point out the usefulness of scales for learning the harmonic landscape of one’s instrument, i.e., the “fingering” maps or patterns of each key on one’s instrument. Knowing each map opens up many possibilities for performance, be it the ability to master a piece of music more quickly, to transpose, or to improvise and compose. Secondly, it helps to develop a variety of routines to practice scales and include playing simple melodies such as nursery rhyme tunes in all keys. The variation in scale routines can include all modes of a given key center, format variations, or all modes utilizing a common starting note. In addition, workouts can be focused on one type of mode or scale, and intervalic scales. Lastly, they can learn these things in bite size chunks, provided the routines are a regular part of their instruction and practice. Eventually they can cover many keys in a single practice session once their familiarity with the scales improves.

When I teach my beginning improvisation students I always ask if they know their scales and every hand goes up, yet when I throw them a curve ball such as playing them modally, the scuffling begins. They think they know their scales, but they really don’t KNOW them, so we begin right there with playing the major scales modally, i.e., C major one octave up and down C to C followed by C major one octave D to D, then E to E, F to F, etc. We work this in all keys. When they get a handle on that (but not necessarily complete mastery) we change format by inverting them playing them down and up. Later, we can change format again by alternating with one mode going up one octave and the next going down, and that too, may be inverted beginning with going down on the first mode and going up on the next. Further, we can ascend the steps of the scale, playing the modes in broken form such as up only or down only. Each variation presents a new look at the same object and aids the brain in developing a sense of each key center on the instrument. Even before we get into more arcane variations, we start playing simple melodies by ear in various keys as well.

Now on paper this may seem to be more tedious, but an interesting thing takes place. The key centers start to form into physical patterns that the student can now execute from different angles. The beauty of learning in music is the snowball effect. Each way of learning something new makes the next way of doing it easier. The mastery of a new format starts to happen more quickly with each successive variation, and the map of each key becomes clearer with each new angle. The students begin to really KNOW their scales and develop greater confidence on their instrument.

Obviously, this requires time. The challenge is how to get it all done along with the other items each student needs to practice. I recommend a short scale routine that starts with “C” and then add a sharp and a flat on the first day. Continue adding a sharp and a flat each day, with a review of any scales that were problematic the day before. This presumes a student will practice and some simply will not, but if enough of your band students get serious about it, the overall technical level of your band will improve and positive peer pressure may result. Here’s a “bite size” routine for working scales:

Here’s a list of varied formats. These will make it interesting.

In addition, students should try playing a simple melody in the same keys they are practicing.

Further variations may include:
1. All of modes beginning with the same pitch, e.g., C Ionian, C Dorian, C Phrygian, C Lydian, C Mixolydian, C Aeolian, C Locrian, followed by the same series on pitch D flat. Advance chromatically upward to the next pitch once all seven modes of the major scale that begin on that note have been played.
2. Alternating ascending/descending chromatically on one type of scale or mode, e.g., C Phrygian ascending followed by C# Phrygian descending, etc.
3. Intervalic scales in thirds, fourths, etc., with varied formats such as upward intervals, downward intervals, and alternating up and down.

The result of all of this “wood shedding” of scales is a greater connection to the instrument on the part of the student and improved technical facility and confidence. In addition, all of this can be done with diatonic 7th chords and with minor scales and their related chords as well. As I said before, taken in small chunks, this is doable and offers a variety of approaches to avoid some of the tediousness. It also lays a solid foundation from which to develop improvisation skills. You will hear a skilled musician emerging from the “lizard” skin once he or she sheds their scales!

Larry Panella serves on the faculty of The University of Southern Mississippi as an associate professor of music and director of the Jazz Studies Program and is the founder and leader of the USM JQ. He has performed with numerous artists and entertainers, including The Phil Collins Big Band, The Woody Herman Orchestra, Natalie Cole, Steve Allen, Nelson Riddle, and Frank Sinatra, Jr. His recordings include his jazz quartet CD, “Under The Influence,” two albums with the Collection Jazz Orchestra, the Ashley Alexander Big Band, the Phil Collins Big Band CD “A Hot Night In Paris,” and two recent releases by jazz guitarist Chris Cortez.
He received his Master of Music from Northern Illinois University and his Bachelor of Music from the University of North Texas where he toured and performed as a member of the famed 1 O’Clock Jazz Lab Band. Before his appointment at Southern Miss, Professor Panella served on the faculty of Wheaton College Conservatory and the Northern Illinois University School of Music.

Mr. Panella is an artist – clinician for Cannonball Musical Instruments, makers of the Big Bell Stone Series line of saxophones.

Jazz Pedagogy: How To Evaluate And Select Music That Fits Your Ensemble