VH1 Saves School Music Programs, One Instrument at a Time 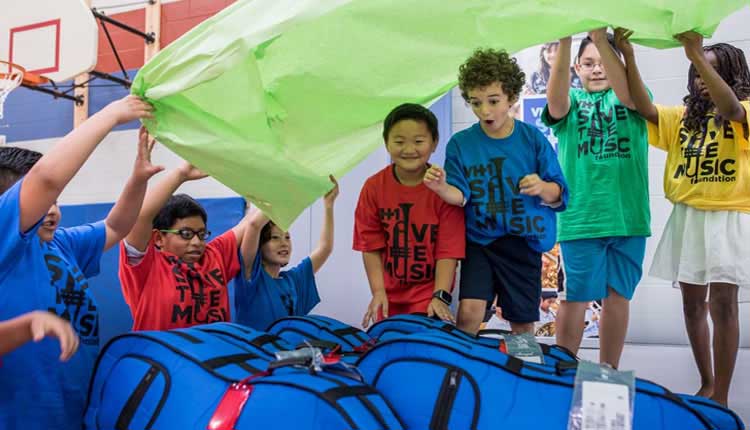 The VH1 Save the Music Foundation, which was founded in 1997, is a non-profit organization that works to restore music programs in public schools around the country, that have either been eliminated or are at risk of being cut from the curriculum. This public charity, which is affiliated with the cable music channel of the same name, increases public support of music education through awareness campaigns, fund-raising events, and instrument drives. With the help of the local cable stations, school boards, music advocacy groups, and administrators in the cities selected, The Foundation puts music back in the schools by donating band and orchestra instruments, guitars, or keyboards to the programs that demonstrate the most need. To date, VH1 Save the Music has given more than $25 million dollars (in the form of musical instruments) to 1000 public schools in 80 cities across the nation.

The impact these grants have had on their recipients has been immense. The stories themselves may vary, but teachers across the country are boasting increased enrollment and attendance, improved behavior and self-esteem among students, and scholastic success in other subjects, all as a result of their newly restored music programs. VH1 and Comcast arranged for an outstanding student violinist from a Philadelphia elementary school to perform on The CBS Early Show; a teacher from PS 161 reported that, in the two years since they received a keyboard lab, more than 500 students are now enrolled in music classes and after-school programs, and the Indianapolis Public Schools held the first-ever All-City Elementary Instrumental Concert last year, with nearly 300 students participating. These are but a few examples of how music programs are flourishing in areas where they hadn’t before; this prognosis gives music advocates everywhere hope that American students will be able to participate in the arts as part of their school’s curriculum for many years to come.

To qualify for a grant, music classes must be scheduled during the regular school day, and schools need to have a qualified instructor on staff. While directors cannot apply for or solicit this support themselves, they can alert the media, school administrators, and local music advocacy groups to the plight of their program, as Save the Music staff members work closely with these community representatives during the selection process. Teachers are also encouraged to send informational packets or brochures to Save the Music about their current program.

The Foundation supports music education courses through instrument donations only; Save the Music does not give money to schools or sponsor organizations, nor does it offer scholarships. The belief is that the gift of musical instruments instead of funds ensures that the contribution will be used solely for music programs, and not divided among or earmarked for other activities. Local organizations or non-profit groups may raise money in the name of VH1 Save the Music to donate to The Foundation (some terms and conditions do apply), but they may not organize a campaign in their community; campaigns are implemented solely by The Foundation.

While VH1 Save the Music is not able to organize local volunteer activities at this time, there are several other ways to get involved. The Foundation recommends contacting the arts coordinator in your district, joining the PTA, or looking into the Music Friends Network (a part of MENC) at www.musicfriends.org/fun.html to donate time and energy within your community. To donate instruments or money, either call 1-888-VH1-4MUSIC or write to VH1 Save the Music Foundation, 1515 Broadway, 20th Floor, New York NY 10036 for more information. More than 80% of all monetary contributions go directly toward instrument purchases, and to date, more than 500,000 children have benefited from the generosity of Save the Music’s supporters, partners, and affiliates.