How it Impacts the Academic Performance of Children - Oliver C. Boone, Ph.D. 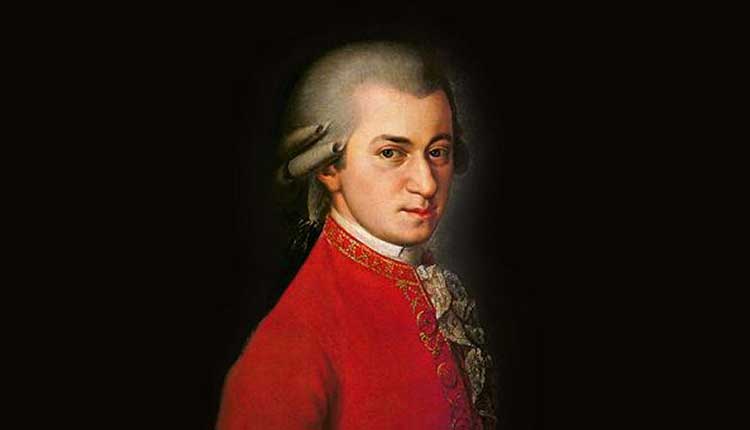 Having grown up in the generation of the popular television show, M.A.S.H., I am continually intrigued by the phrase often used by the character, Major Charles Winchester. You may recall Major Winchester was an avid fan of the music of Mozart. His constant listening of Mozart served to him as a retreat from the fatigue and stress of war. Major Winchester would produce an album of Mozart on his phonograph and fade away into a world of relaxation and release. Although it would tend to drive his roommates, Hawkeye and B.J., somewhat into revolt, Charles was never really concerned for their dismay. To him, the music of the master helped him survive the trauma of war. I can vividly recall the scene where Major Winchester powers up his phonograph with the music of the great master and immediately transform into a state of pleasantness. His words would capture the moment for all its worth as he would so eloquently state…. “Ah Mozart”.

While currently serving as a principal of an alternative school, grades 6-12, and having been a music teacher for 20 years prior to this assignment, I have a strong desire to obtain a greater understanding of the effects music has on the total academic involvement of our youth. While being an advocate for the promotion of the arts in our curriculum, I am also an educational research specialist. I want to know more about the effects music, particularly the classics in this situation, may have on the academic performance of our students. I ask myself the questions: Would Mozart’s music, or other music of the classics, have a positive impact on discipline? Would it have a positive impact on student work ethic? Additionally, would it have a positive impact on academic performance?

As a musician, I wanted to know the answers to these questions. As a researcher and school administrator, I knew I would have to find the answers. By doing so, I could provide a valuable tool toward helping all professional educators understand another process in the total education of teaching and administrating the challenged youth. What better source to research this question than in the atmosphere of an alternative school.

The Mozart Effect is an inclusive term signifying the transformational powers of music in health, education, and well-being. It represents the use of music and the arts to improve the health of families and communities as well the general use of music to improve memory, awareness, and the integration of learning styles. The innovative and experimental uses of music to improve listening and attention deficit disorders.

The therapeutic uses of music for mental and physical disorders and injuries.Through the collective uses of music for imagery and visualization, to activate creativity, and reduce depression and anxiety. (Campbell, Online)

Research with Mozart’s music began in France in the late 1950s when Dr. Alfred Tomatis began his experiments in auditory stimulation for children with speech and communication disorders. By 1990, there were hundreds of centers throughout the world using Mozart’s music containing high frequencies, especially the violin concertos and symphonies, to help children with dyslexia, speech disorders, and autism.

In the 1990’s experiments were begun at the University of California in Irvine with Mozart’s music and spacial intelligence assessments. As recently as 2001, new studies in England use Mozart’s music to study its effect on epilepsy. (Campbell, Online) Don Campbell, author of “Tapping the Power of Music to Heal the Body, Strengthen the Mind, and Unlock the Creative Spirit’ relates medicine, Eastern wisdom, and the current research on learning and creativity, to reveals how exposure to sound, music, and other forms of vibration can have a lifelong effect on health, learning, and behavior.

He shows how to use sound and music to stimulate learning and memory; how to strengthen listening abilities. (Campbell, Online) Campbell describes himself simply as a man who has “listened to the world.” Yet his experiences in doing so, including the profound influence of the pioneering work of French researcher Dr. Alfred Tomatis on the central role of the ear to overall mental and physical health and the critical distinction between hearing and listening, have led to a renaissance body of work.

The clarity, form, excellence of the performance, and frequency response have all gone into the selection of this special series of Mozart’s music. The music has been sequenced for different activities. Music containing high frequency for stimulating the auditory system in the brain has been selected based on the work of Dr. Tomatis. The relaxation albums are slower and do not include the higher frequencies. The selections have been sequenced according to key, tempo, and a variety of other psychological, physiological, and aesthetic factors to achieve a variety of auditory, physical, and emotional responses.

One may ask the question, why Mozart. Surely there were other musical geniuses throughout the years who may have had a profound influence toward the enhancement of intelligent thinking. Dr. Tomatis posed similar questions. He found that the music of Mozart seemed to calm listeners and improve spatial perception. The listener was found to express themselves more clearly. These results were found to be true regardless of a listeners tastes or exposure to Mozart. The high frequencies of Mozart’s music were found to stimulate and give charge to the motivational and creative areas of the brain. Mozart’s music efficacy was found to exceed the music of his predecessors or his successors. (Campbell, 27)

Howard Gardner, A Harvard Professor, brought forth one of the most influential books on education in the “Frames of Mind”. It brings to the forefront the idea that all of us have multiple intelligences in addition to linguistic, logical-mathematical, spatial, and bodily-kinesthetic. Gardner proposed that we also have interpersonal, interpersonal, and musical intelligences. (Campbell, 178)

Since the introduction of “Frames of Mind”, a new focus has been presented into the effects of music into the arena of total education. Campbell endorses the belief that the more stimulation a child receives through music and the arts, the more they will implement intelligence. “Of course, stimulation must be followed by quiet and reflection; otherwise, the benefits may be lost. As most parents of teenagers know, a steady diet of music alone doesn’t necessarily make kids brighter.” (Campbell 179)

Music brings a positive and relaxing atmosphere to many classrooms, as well as allowing the sensory integration necessary for long-term memory. It also serves as a background in some classrooms to mask industrial or traffic sounds, and it can be used successfully to install excitement, relieve stress before testing, and reinforce subject matter. (Campbell, 179)

In attempting to gain a greater understanding and definition of what does the music of Mozart ‘do’, it would seem logical to understand and define the complexities of classical music in general. It is, after all, a known fact that classical music is complex. To the average listener it is sometimes intimidating and difficult to comprehend. Classical music, defined as the art music of Europe from the 16th to the 20th centuries, is different.

Mozart did not invent classical music, but he certainly helped drive its significance. “Its point is not necessarily to make the strongest immediate impression, but to create a sophisticated texture of sound that reveals its connections only gradually and to the careful ear.” (Harris, p. 13)

“Although classical music is more sophisticated and complex than virtually any other kind of music, the basic elements that help create a classical piece are relatively simple, and not that different from those contained in any kind of music.” (Harris, p.16)

The structure of music is centered around four basic elements-melody, rhythm, harmony, and texture. It is the texture which gives a uniqueness to the art form and potentially academic significance to classical music. Texture, or better defined as, the feel of the music, presents the listener’s approach to the music. Texture defines the colors of the tone and how does the music ranges from loud to soft. For music, texture is a means of immediate impression by the listener that stimulates our emotional imagination. (Harris, p.16)

Additionally, the texture of any particular piece of music is often a personification of the way of life and times in which it was written. Mozart’s music gives a clear description of the society in which he lived.

“Since his music was written for nobility, to charm and entertain them, it was often quiet, restrained, modest and pleasant…..Mozart, genius that he was, provided the most perfect expression of the virtues of order and balance, grace and elegance, to which his era aspired.” (Harris, p.17)

I randomly selected four students from our alternative program for study. These students shall be identified by numbers and not by name. The students are identifiable to a range of emotion from moderate special education to behavior disorder. Each is challenged academically and are characterized as immature and disruptive.

The monitor has access to the instructional and testing processes of each student. Additionally, the time frame of each student’s rate of performance on a particular subject is recorded by the monitor. This information is vital to the overall research process. Close examination was given to how the students researched performed academically and behaviorally at various stages of the day, i.e. after lunch or after breakfast.The following information serves as data collected during the course of the eight week examination period.

The behavior performance of the four students was monitored during the study. A focus was given on four separate time frames of the day consisting of early morning, late morning, early afternoon, and late afternoon.

The behavior pattern of the four students was recorded as follows:

The graph below visualizes the data mentioned. 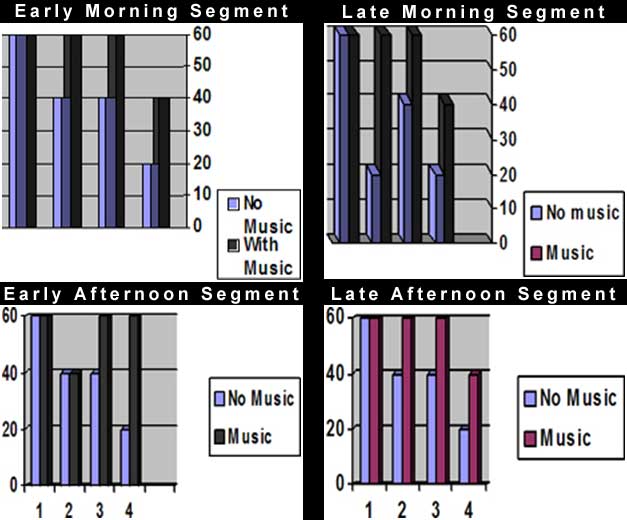 The testing research also indicated that music being played resulted in the students producing more submissions in Language Arts in the morning, late morning and early afternoon segments. Mathematics was produced more in the morning and late morning with music being played and stayed even in submissions in the two afternoon segments. Science was produced more in every segment with music played while Social Studies submissions were greater while music was not played.

Based on the testing data the following conclusions can be made.

When music was played:

The results given above may prove essential to the administrator and teacher when scheduling students for those subjects which have rated low or weak on state and national testing based instruments. Administrators may choose to schedule select classes of specific core curricular within the specific segments of the day where music has justified academic improvement, i.e. Select Math and Science classes in late morning or late afternoon segments, provided the teacher utilizes the advantages of classical music playing softly in the background of the room.

Gardner emphasized different methods of learning and music gives an indication of enhancing the academic and behavioral processes of educating today’s youth. It is no wonder why Major Winchester of M.A.S.H. proudly proclaimed those wonderful words….Ah Mozart.

Oliver C. Boone is the superintendent of education with the Wynnbrook Christian Schools in Columbus, Georgia. A music teacher for more than 20 years, he holds a Ph.D. in educational leadership and is an advocate for the promotion of the Arts in the educational curriculum.