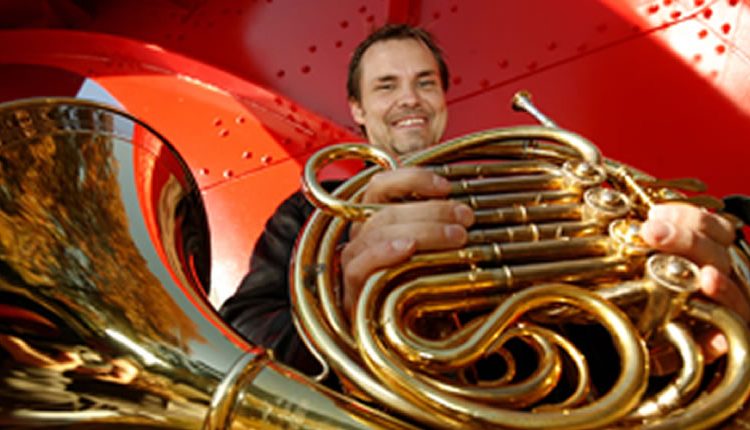 Have you ever played a brilliant piece of music, taken a perfect golf swing, or given an inspiring speech .. when no one else was around? If your performance seems to suffer when you’re in front of an audience, you’re not alone. Nerves can get the better of just about anyone, said Jeff Nelsen, associate professor in the Indiana University Jacobs School of Music and hornist with international performance group Canadian Brass.

Helping people transcend their fears is Nelsen’s specialty. He teaches seminars on “Fearlessness,” which he describes as “a mental state of complete faith in the moment at hand and any task ahead.” Feeling fearful detracts from your performance, he said, by causing you to focus on yourself rather than your mission.

“The only time fear is a constructive thing is when it gets me into the practice room,? Nelsen said. “I’m a pig farmer from Alberta, Canada. If I stop to think about whether I’m good enough to be onstage, I’ll be paralyzed.”

Instead, he said you need to literally lose yourself in the moment — forget about who you are and focus on what you want to achieve. But in order to make that happen, you first need to build the habits that will serve you when it comes time to share your talents.

In celebration of a new year and new possibilities, we offer 10 tips from Nelsen on becoming fearless. Whether you perform on stage, on a playing field, or in a boardroom, you can use these methods to replace your nerves with a confident and optimistic outlook. For more information about his techniques, visit http://www.jeffnelsen.com.

Raise your standards. Most people have one set of standards for how they perform when they are practicing, and a much higher set for the “big day.” Nelsen said these double standards are harmful because it takes so much mental energy to switch from your everyday mindset to your higher performance standards. A more effective approach is to have the same high standards every time you practice your craft, he said. “You want to maximize your habits so you don’t have to use your intellect to remember what to do,” he said. Meticulously executing every action requires dedication, but it pays off when you can relax during your performance and trust the habits you have established, he said. “It’s exhausting, but worthwhile.”

Simulate the entire performance experience — 50 times. Once you know how to complete each element of your performance, put it all together and go through it again and again. For a golfer, for example, this would mean not just swinging at the ball, but walking up, assessing the situation, assuming your stance, swinging and following through. For a musician preparing for an audition, it would mean walking onstage, taking a moment to prepare in silence, raising the instrument, and then performing. “Repeat the entire process a minimum of 50 times before any performance,” Nelsen said. “Your level of nerves will be inversely proportional to your amount of preparation.”

“Flawlessness” is not the primary goal. It’s important to minimize mistakes, but an error-free performance is not the ultimate test of your abilities, Nelsen said. “In my opinion, only a computer is flawless. What makes a performer good is that he or she is human, and brings to the art something more than what is written on the page. Otherwise computers would be doing all the recordings,” he said. The best performances are memorable not because they are perfect but because they are extraordinary. He tells the story of a performer trying out for the Montreal Symphony who, despite missing more notes than anyone else, won the audition. “The director told me that he made so much music that they couldn’t not hire him,” he said. Focus on what you want to convey, over and above the technical qualities of your performance, and trust your preparation to keep your errors to a minimum.

Don’t compete. “When you compete, you lower your standards,” Nelsen said. “Was Mozart competing? Was Einstein competing?” You also run the risk of misjudging the playing field, he said. “If you show up knowing Billy’s the best, and you showed up ready to do better than him, then what if Sally shows up and Sally blows Billy out of the water?” Aiming for the best possible performance you can imagine is a far superior goal, he said.

Jeff Nelsen
Jeff Nelsen teaches seminars on “Fearlessness,” which he describes as “a mental state of complete faith in the moment at hand and any task ahead.”

Think of what to do, not what to avoid. Telling yourself not to do something only focuses your attention on the very thing you want to avoid. “It’s like saying don’t think of an elephant — you immediately think of an elephant,” Nelsen said. Replace any negative injunctions with positive mental instructions. Instead of telling yourself not to look down, think about looking up. Rather than concentrating on not dragging your feet when you run, think of picking up your knees. “Nature abhors a vacuum. You have to replace your ‘don’t’s with powerful ‘do’s,” he said.

Sell the story, not yourself. Rather than aiming to showcase your talents, allow your enthusiasm to infect the audience. You may want the audience to love you, but instead, Nelsen said, “make them an audience that loves what you love.” This requires a constant effort to stay focused on what you are doing, not how you are being perceived. “It’s about now. Now. Now. Stay in the present moment every second,” Nelsen said.

Think of something you did right. After a performance, take a moment to note the things you did well, he said. “Don’t start out by thinking about all the things you did wrong. You have to have a low tolerance for destructive thinking,” he said. Once you have listed several things you liked about your performance, a process Nelsen called “strength-collecting,” then you can move on to critique and identify a few areas for improvement.

Broaden your base of self-esteem. “The best thing I ever did for my horn playing was quit for several years, because when I picked it up again I didn’t have all of my self worth and dreams invested in the one pursuit,” he said. With other interests (such as magic, an element he occasionally adds to horn performances), Nelsen said he is able to approach his craft not only with more composure but also with the life experience that can enrich his music. “I tell all my students to be sure to have a life — have friends, fun, date!” he said. “Otherwise, how will you understand the things that music is about?”

Aim too high. It’s essential to reach for goals beyond what you think you can achieve, Nelsen said. One of his favorite quotes comes from late motivational speaker Bob Moawad: “Most people don’t aim too high and miss, they aim too low and hit.”

The Buzzard by Warburton

Join Us for the NAMM Advocacy Summit